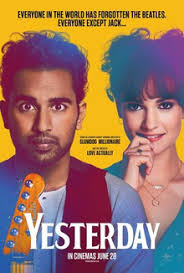 A world without The Beatles is not somewhere I would want to live, but this is the unlikely scenario on which this strange, occasionally enjoyable but ultimately flawed fantasy film is based. It’s far too cute for my liking, with laboured jokes, inexplicable plot twists and a soppy, all too predictable, ending. Also, for those unfamiliar with The Beatles – and there’s probably a few such folk now we’ve reached 2019 – there’s a lack of backstory that fails to celebrate the group and their songs to the extent that they merit.
It’s the present day (I think) and for reasons unexplained there’s a worldwide power failure during which Jack (Himesh Patel), a struggling singer songwriter, is knocked from his bike and rendered unconscious. He wakes up to discover that no one remembers, or is even aware of, The Beatles, or Coca-Cola or cigarettes or Oasis for that matter. This realisation comes across subtly, at first anyway, with quizzical faces appearing when Jack quotes a lyric or, more importantly, accompanies himself singing ‘Yesterday’ to a group of friends who believe he’s written it himself.
Among the friends is Ellie (Lily James), his manager-cum-roadie-cum-cheerleader, who provides the romantic spark as their platonic relationship grows into something more meaningful. Meanwhile Jack tries desperately to recall as many Beatles songs as he can, mostly predictable choices like ‘Help’, ‘She Loves You’ and ‘Let It Be’, and performs them as if they were his own. The audiences get bigger, a five-track demo gets airplay, his career gets lift-off and along comes admiring Ed Sheeran, playing himself, to offer Jack a support slot on his world tour.
So far so good, but the first indication that we’re approaching naff territory is the arrival of Debra (Kate McKinnon), playing Sheeran’s American manager, who takes Jack under her wing to make him a star. Someday a screenwriter or director will have the balls to portray a music business manager as a caring, nurturing character whose priority really is the welfare of their client and not a money-grabbing monster, but in Debra we have the trite clichéd version, the US equivalent of the way Dick James was portrayed in Rocketman, the movie based on the life and music of Elton John.
Thereafter the film sinks into a rather banal love story and the Beatles angle becomes secondary to Jack and Ellie’s will they/won’t they relationship. With the awful Debra pulling the strings and a double album of ‘self-penned’ Beatle songs in the bag, Jack is primed to become the biggest star the world has ever known. Then he’s confronted by his conscience, aided and abetted by a couple of unrelated punters who arrive on the scene and, like him, happen to remember The Beatles, so he forsakes all, shacks up with Ellie and everyone lives happily ever after. There’s an unexpected and, frankly, unnecessary twist at the end in questionable taste that I won’t reveal here but, like much of everything else, it merely accelerates the inevitable cheesy conclusion. The closing, appallingly twee, scene sees Jack reduced to singing ‘Ob-La-Di Ob-La-Da’ to a bunch of kids at the school where Ellie is a teacher, but the conundrum on which the film is based – the genesis of the songs – remains annoyingly unresolved.
I have no quarrel with Patel or James who play their parts well, though Patel does seem a tad detached, with the film carrying him instead of the other way around. James is her usual, attractive bubbly self, amusingly switching with ease from the three-blokes-in-as-many-weeks promiscuity of Donna in Mamma Mia! Here We Go Again to the chaste, we’ve-known-one-another-for-years-but-haven’t-shagged-yet Ellie. Nor do I have much quarrel with Danny Boyle, whose direction is as lively as you would expect. No, the culprit here is screenwriter Richard Curtis who has simply used the music of The Beatles and the ludicrous conceit of their not having existed as a vehicle for yet another rom-com that is little more than a retread of his other, similar, scripts (Four Weddings, Notting Hill, et al) wherein a couple of long acquaintance or differing circumstances don’t realise they’re attracted to each other romantically until something eventually happens that makes them realise they do.
I’ve read that Paul and Ringo ‘support’ the film and that its release has sent John and Paul to number four in the Rock Songwriters Chart, whatever that it is. Well that’s great but they, The Beatles that is, deserve better than Yesterday.

I think you've missed an important point about this film. It's no coincidence that it's been launched in the middle of Brexit, which has made the country deeply divided. Here is a soppy rom-com that makes us all feel proud and happy to be British.

Good point. I'd overlooked the film's propaganda role in this time of trouble!