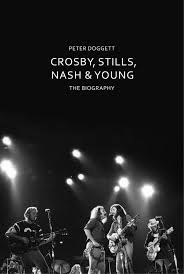 
* At least according to my former MM colleague Richard Williams who reviewed both books simultaneously in last weekend’s Guardian Book Review magazine.

David Browne's book is actually worth reading if you're interested in any of the protagonists post-1974, but a little depressing when you see just how petty they have been with each other. Crosby's misadventures are well covered too.

Having just read one I think I'll wait a while to read another, but thanks anyway.

I think Nash left his money behind in England at least partly because he also deserted his wife and child there.