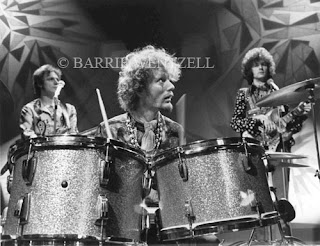 Never an easy man to like but unquestionably a drummer of unbeatable skill and precision, Ginger Baker just happened to be the first rock star I spoke to on the day I joined the staff of Melody Maker, a Monday in May, 1970. Charged by the then News Editor Laurie Henshaw with writing a story about Airforce, the group that Ginger formed after the dissolution of Blind Faith, I spoke to him on the phone, a call arranged by Mike Housego, the publicist at his management company, the Robert Stigwood Organisation.
Ginger was friendly enough, quite chatty in fact, and clearly proud of the new band he’d formed. It was called Airforce but in the event it was a bit too ambitious, with about 12 musicians vying for room, including Steve Winwood and Ric Grech from Blind Faith, as I found out for myself a few weeks later when I went to see them play at the Revolution Club on Bruton Street off Berkeley Square. The ‘Rev’, as it was called, was a trendy nightspot, a bit upmarket, and not really suitable for Ginger’s new band, with a stage barely large enough to contain them and a low roof that did few favours to the acoustics. The show was a bit ragged, a bit too many cooks spoil the broth and, being as how Ginger was in charge, a bit too percussive for me. I can’t remember what I wrote but I suspect it wasn’t too flattering.
Ginger next arrived in my orbit at my MM colleague Chris Welch’s wedding in December, 1971. He was an invited guest and although he didn’t show for the ceremony I vividly recall his presence at the reception, in a church hall at Blackheath, south east of London. He’d parked his blue Jenson Interceptor on the pavement outside, a bit inconsiderately I thought, and he strolled in smoking a huge spliff, as big as a cigar. Spotting Chris in conversation with the vicar who’d conducted the service, Ginger joined them, chatting away about something or other. I sidled up and watched as the great drummer took a puff on his joint and blew out the smoke all over the bewildered cleric, a look of mild apprehension spreading across his innocent, saintly face. Later, Ginger attacked a drum kit that had been set up on a small stage, joining a number of other guests, including, as I recall, various members of Yes, ELP, Jon Hiseman, Peter Frampton, Marc Bolan and, of course, Chris Welch himself, who was no slouch behind a kit. Chris later told me that Ginger had given him a bag of grass as a wedding present.
And that was it until 2005 when I beheld Ginger with the reunited Cream at the Royal Albert Hall. For my friend Tony Fletcher’s iJamming website I wrote: “I was especially impressed with Ginger, a skinny, sinewy, snappy little chap, fit as a fiddle, wide-awake and smacking those drums like he was cracking a whip. He’s not ginger any longer, more off-white actually, bespectacled too, and he reminded me of old man Steptoe…
“As for the highlights, I rather liked Ginger’s novelty song, ‘Pressed Rat And Warthog’, which he concluded with a droll announcement: ‘I’d like to inform you all that [a very long list of items of clothing] are available, all with the word Cream written on them.’ He made it sound for all the world as if he was completely new to – but much delighted by – the concept of band merchandising, a nice touch….
“‘White Room’ was lively and brought the house down, as did ‘Toad’, Ginger’s solo; the first drum solo I’ve heard in years which, contrary to expectations, I found myself enjoying. It was as if the coiled spring inside this wiry little fellow, which had kept the band on a fairly tight leash throughout the night, was finally allowed to unravel.”
In 2009, I was approached at Omnibus Press by a literary agent seeking a publisher for Ginger’s autobiography, subsequently published by a rival company a year later as Hellraiser and largely written, I believe, by his daughter Nettie. The agent wanted a lot of money and, weighing up the pros and cons of working with Ginger, I respectfully declined. There were lots of errors in the manuscript I read, and I didn’t fancy sitting across a table and pointing these out to the great man. “Er, Ginger the boss of Island Records is called Chris Blackwell, not Chris Blackmore. I think you're getting him mixed up with the guitarist in Deep Purple.” “Deep fucking who? Fuck off!” I was being a coward, of course, but when I mentioned this to friends later they all seemed to think I’d taken the wisest course.
Still, Ginger Baker is a name that conjures up all that was magic about the flowering of rock in the sixties, when musicianship was all the mattered, and when offbeat characters like Ginger represented an ideal that seems to have been lost amid the tepid temperaments and overt commercialism of today’s music world. Ginger had charisma in spades and was, pardon the pun, the cream of rock drummers, indomitable in the ‘top drummer’ section of Melody Maker’s annual Readers’ Poll when I was on the paper. RIP if you can, you old devil.

As is clear from the watermark, the picture at the top of this post was taken by Barrie Wentzell, MM’s chief contributing photographer between 1965 and ’75. Captioned Top Of The Pops, 1967, it features Cream, with Ginger up front, Jack Bruce (left) and a permed Eric Clapton (right).

Hi Chris, I'm a journalist at the BBC News Channel. Trying to get in touch with you to see if we can set up an interview (probably via skype or facetime) to talk about Ginger Baker.What is the best way to get hold of you? You can call 020 361 42424 - if you'd prefer to call me! All the best, Sam