THE BEATLES AT THE FUTURIST THEATRE, SCARBOROUGH 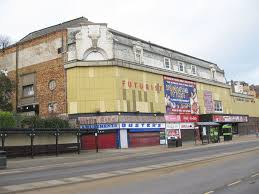 Named after the dystopian movie directed by Danny Boyle, the website 28 Days Later (https://www.28dayslater.co.uk) features photographs taken by explorers (under pseudonyms) of derelict buildings, often illegally which makes it slightly dangerous but definitely more fun. Somehow the explorers find their way into abandoned residential properties, disused industrial and military sites, old mines and drainage tunnels, and what they call entertainment buildings – pubs, theatres, cinemas and old fairgrounds. The pictures are often fantastic, immensely evocative of times past, sometimes a bit strange or even scary.
One such posting referred to Scarborough’s Futurist Theatre, now demolished, which was visited by an explorer who calls himself Esoteric Eric just before the wrecking ball hit. I was fascinated by this as my grandparents lived in Scarborough and my dad took me to shows there when I was a boy in short trousers; ‘end of pier’ style shows, and also the Black & White Minstrel Show when I was too young to realise that it was in questionable taste for men to put on blackface. So I decided to flex my music writer muscles on the 28 Days Later site, doing a bit of research and posting the following after the pictures of this theatre gone to seed. Here’s what I wrote:
“The Beatles played two shows at Scarborough’s Futurist Theatre on December 11, 1963, ten days before I saw them myself at the Gaumont Cinema in Bradford. If what I remember from that night is anything to go by, then it’s not hard to imagine the sheer pandemonium inside the Futurist that December 11. 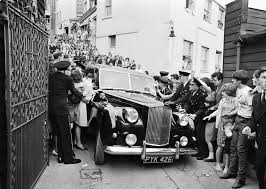 I found this pic on the internet - The Beatles arriving at the Futurist.

“As you look at Esoteric Eric’s photographs of the stage and seating, imagine the scene: the curtains drawing back and 2,400 teenage girls exploding like hand-grenades, screaming their heads off at The Beatles in their matching suits and Cuban-heeled boots; Ringo on a riser at the back, his drums flanked by their black and gold Vox amps, Paul on the left pumping his violin bass, shaking his moptop head as he sings, George to his left, grinning behind his outsized Gretsch guitar, and John on the right, his Rickenbacker guitar strapped high on up his chest, squinting into the mayhem, yelling into a microphone to make himself heard: ‘You think you’ve lost yer lurrrve, well I saw hur yesterday-ay-ay’; and the whole theatre a tableau of ear-splitting insanity as delirious fans cry, wave, stamp, jump, throw stuff and stand onto their seats to get a better view. 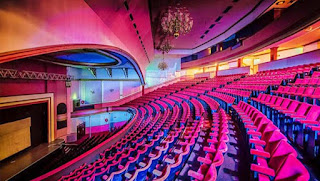 The interior of the Futurist.

“And outside on the street between shows police struggling to hold back crowds such as Scarborough’s forefront had never seen before nor ever would again, and at the end of the second show the four boys, the youngest just 20, and their road manager Neil, fleeing from the madness via a back door and into their Daimler Princess limousine to nearby Filey where they spend the night at the Hylands Hotel. And the next day the same again in Nottingham and the next day the same again in Southampton…
“It would be nice to think that some of those in the audience that night who might still live in Scarborough, ladies in their seventies now, perhaps even grandmothers of teenage girls themselves, will reach for a Kleenex as the wrecking ball does its dirty work on the Futurist Theatre. It can’t erase the memories though: ‘Yea, yeah, yeah.’”
As a holidaying family we stayed at the Hylands Hotel in Filey many times in the fifties, mum, dad, sister Anne and me. Sometimes we occupied a suite at the end of the corridor, two bedrooms with two single beds in each and a bathroom, all accessed by a single door. One year the magician and puppeteer Harry Corbett was staying in the hotel – he was doing a season in Scarborough – and somehow dad persuaded him, probably over a couple of drinks in the bar, to come to our rooms with his creation Sooty and put on a little show for us. 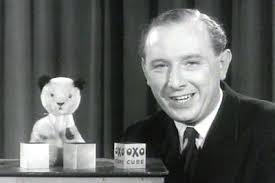 I like to think – and I might be right – that The Beatles stayed in the same suite as we did, the same one where we saw Sooty eight or nine or ten years before.

Hi, guys. I want to drive in Cabriolet in Dubai. What is a reliable rental service here?

Hello. I am glad to share my experience with you. I have been living in Dubai for 2 years and I have noted that many people prefer rental cars. Generally, I am among them also. I prefer Cabriolet and rent it here https://rentacabrioletindubai.com/ The managers were friendly to me and the car was in perfect state. Anyway, I think that a rental car will be convenient for your trip. So, you can confidently use the service I was.