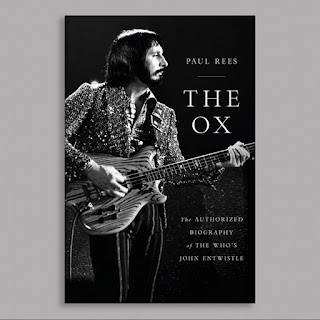 Email ThisBlogThis!Share to TwitterShare to FacebookShare to Pinterest
Labels: Book Reviews, The Who (Books), The Who (John)

Great review, Chris. It'll give me a bit of a melancholy mindset before I start on my copy.

"The Last of the Great Rock Stars" always seemed a little odd to me as John's summarizing epithet. Much as I revered John, I'm not sure it applies.

I agree about the UK cover -- seems like he deserved better (as on the US cover). Maybe there's a story behind that photo to recommend it.

Yes, this is a very good review. It's the sort that makes you want to go and buy the book.

Can't be anymore melancholy than Annette Walter laxs "The last Four Years",a depressing read,made even more so by a $30 price tag.

"...the well-known Ox with the spider emblem around his neck, stage left, motionless..."

Ox was always stage right, Pete stage left. "Stage ____" refers to the point of view from the stage looking out at the audience. Can't wait to read this book! Didn't know it was coming out.

Looking forward to it, thanks for the details!

Sounds a sad tale.. at the moment my inclination is to avoid.. I’ll keep my bass hero in my mind as I remember him.

Why When How Who said...

Hi Chris as always , a great and thoughtful review. I like that you as great journalist do, don’t hold back on your opinion of various players that blessed Entwistle’ Life even though you are a massive fan , . I’ve only read recent Daltrey bio which I thought lacked detail and Townshend’s Who am I which Probably was too honest and I admit I was confronted by Townshend. His god like status was harmed and in my eyes. All good now!
And I will catch up on Moon’s bio. But Entwistle was an enigma . His fellow band members thrashed out themselves on stage but John still kept himself a gentleman and able to remain stoic whilst those around seemingly crazy! Off stage was his time to enjoy his inner child .

Fair comment all through – its a really good read, lucky enough to have a preview copy and it is a genuine page turner. A pity that Townshend and Daltrey didn't cooperate – can but assume that since neither are direct quoted. Find that a little disrespectful since (just my view) The 'oo were always a sum of their parts.

Great review thanks, Chris. It just seems so tragic that someone with such awesome talent and who gave so much pleasure to others wasn't able to really benefit from his own success.

"His introduction to Townshend and, later, Daltrey"

He met Daltrey first.
He introduced Townshend to Daltrey.

Great write up, I never thought I would be inclined to read a JAE bio.

Wait, you're correct...
He did know PT first.
But he did introduce Townshend to Daltrey.
If anyone cares.

Yes, Pete and John were in a band together before John hooked up with Rodger and suggested Pete joined too.

Got my copy the other day, and read it immediately. Some good stories, plus excellent perspective on stories we've heard. My biggest beef is the misspelling of critic John Mendelsohn and producer Bill Szymczyk's names. Plus, pretty sure John wore the skeleton suit at the 1970 Isle of Wight, not 1969.

Enjoyed the book but I have to point out the errors on pages 272 and 273. My hometown area is called Glens Falls, NY, not Glen Falls and not Glen Springs as referred to only 1 page later. Hope it can be fixed in time for the 2nd printing.

You are right, and I pointed that (skeleton suit) out to the author in private e-mail.