A VAGUE HAZE OF DELIRIUM CREEPS UP ON ME – My Passage To Melody Maker, Part 3 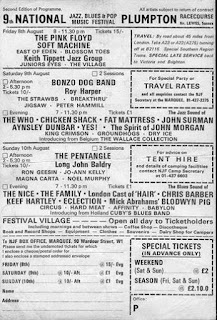 I sat behind a desk in Melody Maker’s offices for the first time at 10am on Monday, May 4, 1970 – 50 years ago next week. To get there, I drove from Englefield Green to Egham railway station, caught a train to Waterloo and a bus to 161 Fleet Street, London EC4, the HQ of IPC Business Press. The real journey, of course, was a bit more complicated and took considerably longer, and it involved all sorts of twists and turns and even a false start. When I look back on it now it seems like a rational progression, a logical career step, but at the time I couldn’t see the wood for the trees. In the end, a family tragedy played its part in showing me the way.
In the second week of August, 1969, I saw The Who for the first time at Plumpton Racecourse, the NJF Festival near Lewes. The same friend who the previous year had seen Yes with me and infiltrated La Chasse Club in London landed a weekend job working on one of the bars, and he got me onto the site on the premise that I’d help washing glasses. I probably did too, but not on the Saturday night when The Who were playing. By today’s standards, the festival at Plumpton was small time, perhaps 25,000 attending at the most, which made it fairly easy to push my way down towards the front, to the right of the stage where Pete Townshend stood.
I knew The Who’s songs and the Tommy cycle well by now so watching them perform at last, a matter of yards from where I was craning my neck, was a rite of passage I’ll not forget; their drive, their fluency, the deafening volume, far louder than any group I’d heard before, that hypnotic sight of The Who in full flight, tearing up a stage in an era when their energy knew no bounds. As I watched, spellbound, never for a moment taking my eyes off them, Townshend in particular as he leapt into the air, pirouetted and windmilled, it occurred to me that my fellow festival-goers, whooping, singing and yelling alongside me, strangers all yet crushed together like football fans behind the goal before all-seater stadiums, were the kind of people I wanted as friends. How was I to know it could be as good as this? At the climax of Tommy, as The Who sang about listening to us and getting the music, as the yelling around me grew even louder, I knew I wanted to be a part of it. 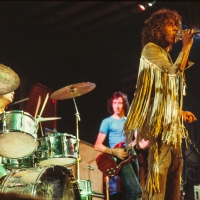 Townshend and Daltrey on stage at Plumpton, 1969. (Pic by Eric Hayes)
The Monday after the Plumpton festival, back in the Evening Mail offices in Slough, I was somewhere else inside my head. How could I explain to the people in this office how I’d felt on Saturday night? All too briefly I had been where I wanted to be but now I was back where I was before. I’d begun to hate wearing a suit and tie, and I didn’t like getting my hair cut – both prerequisites for newspaper reporters who were supposed to look like bank tellers. A week or two later, on a hot day after a liquid lunch, I fell asleep in the Slough courtroom, snored lightly and was ordered out by the magistrate. It got back to the editor and I was carpeted. In September I spent a week in France with an old friend, the drummer in my first band, driving south and staying in a log cabin on a campsite near Cannes. Drunk one night on cheap red wine, I told him how conflicted I was. It’ll be ok, he said. Something will turn up.
He was right but I’d have to wait. It was October when I spotted the advert in MM’s back pages for the job on their editorial staff. Eureka! Why hadn’t I thought of this before? I somehow got an afternoon off and caught the train into London, to MM’s offices on Fleet Street, for an interview with the paper’s editor, Ray Coleman. He asked me to name my favourite group. I didn’t hesitate. The Who.
Ray smiled. Good choice, he replied.
I told him, no doubt prattling on like an idiot, how much I’d enjoyed seeing them at the NJF Festival, and he wrote something down on a pad on his desk. “There have been lots of replies to the advert,” he told me as I left. I’ll bet there has, I thought. Half of them were at Plumpton.
A week or two later, Ray’s secretary called to tell me I hadn’t got the job. But here was hope. I was on the short list, she told me. There might be another vacancy soon. I kept all this to myself, and to soothe my disappointment I exchanged my Ford Escort for a used MGB, red, open top, very flash.
About one weekend in four I would drive back up to Yorkshire to see my friends there and reconnect with my mum, dad and sister Anne. For many years now my mother had suffered from an agonising, chronic back condition, perhaps a legacy of her role in WW2 when, as an ATS chauffeuse to top military brass stationed around York, she’d driven poorly sprung jeeps over rough ground regularly for the duration. Treatment after treatment on her spine had failed and for weeks that summer she was immobile, in a plaster cast from her neck to her knees after yet more fruitless surgery at Leeds Infirmary. Finally freed from the cast, one evening in late November mum waited until dad left her alone for a couple of hours and took her own life. Somehow holding his emotions in check, dad called me in Englefield Green the following morning. Reeling, I drove up to Skipton and wept at her funeral. 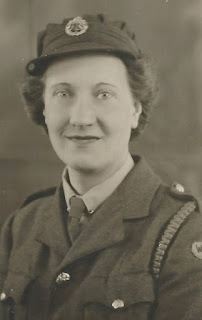 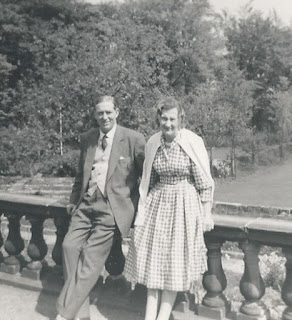 Top: My mum in her ATS (Auxiliary Transport Services) uniform during the war; below: with my dad in the late 1950s.

Christmas 1969 was an awful, miserable time for us. Dad tried desperately hard to put on a brave face, taking my sister and I out on Christmas day for a meal in a restaurant, the first and last time we ever did this. In a peculiar way, the shock of it all, the sudden, unexpected loss of the parent who had encouraged my reading all those years ago, was a final loosening of any apron strings that tied me to my past in Skipton. It was as if I could now do something different with my life without the need for her approval, free to do precisely what I wanted, but whatever it was it hadn’t happened, not yet.
In January I was back at the Slough Evening Mail, desperate for a change. One thing was certain: I couldn’t go back north. In the flat in Englefield Green I listened to my records on earphones, The Who now joined by Hendrix, Cream and The Beach Boys’ Pet Sounds. I reinvestigated Dylan, the ’65/’66 albums, and discovered Arlo Guthrie’s Alice’s Restaurant which I could soon recite parrot fashion. My LP collection was growing, Elvis, Buddy and the Everlys from way back, lots of Beatles and Stones now joined by a dozen or more others. One day I arrived for work in an open-necked shirt and was sent home to put on a tie. We got word that John Lennon had bought a house at Ascot, just within our circulation area, and a photographer and I were dispatched to investigate. We got no further than the gates of Tittenhurst Park. Although it was a thrill to think I was so close to a Beatle, I couldn’t help but think that had I not been wearing a suit and tie I might have crossed the divide.

Tittenhurst Park at Ascot, the Lennon residence where I was refused entry.

By March I was in no doubt that this reporters’ life wasn’t for me. But what to do about it? It was all I was trained for but the thought of another day at the magistrates’ court or council meeting was soul-destroying. I was drinking a lot at the Fox & Hounds, our local in Englefield Green. Perhaps out of frustration, I seduced the girlfriend of the mate who turned me on to Zep and The Doors and didn’t feel as bad about it as I ought to have done. It happened in the passenger seat of my MGB, not the easiest manoeuvre, when I was giving her a ride home from the pub. She was certainly willing.
Then, out of the blue, came the lifeline I was waiting for and everything changed: another call from Ray Coleman’s secretary, this time telling me about another vacancy on MM. Was I still interested? She didn't have to ask and I didn’t even have to go for a second interview. I must have been number two on the list.
I worked my notice on the paper in Slough during April and when I told my colleagues there that I was going to work on Melody Maker they looked askance, as if I was jumping off a precipice. My dad didn’t comment much. He knew I was out of his hands now. I have no idea what mum would have thought, probably hated the idea. It didn’t matter. Nothing did now.
So it was that at the end of April 1970, 50 years ago this week, I left regular journalism for good and became a full time music writer. On that day, 50 years ago on Monday, when I rolled up for work in MM’s offices for the first time, it really was the first day of the rest of my life. I’d reached Fleet Street but on my own terms.
Fifty years later I still think I made the right choice. 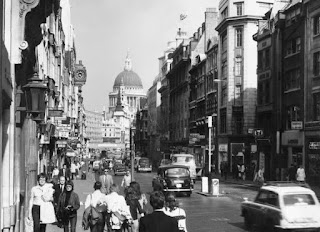 Fleet Street in the early 1970s. MM's offices were the right, adjacent to the taxi.
Posted by Chris Charlesworth