As I explained last week, I joined the staff of Melody Maker on the first Monday in May, 1970, 50 years ago today. For this auspicious occasion, I dressed in black flared trousers, a grey hounds-tooth jacket with wide lapels and, I think, a yellow shirt. Foolishly, I put on a kipper tie, not the sort of tie I would have worn for the newspaper office in Slough but a tie nonetheless, perhaps out of habit, perhaps because the only member of the staff I’d met thus far, editor Ray Coleman, had a kipper tie on when he interviewed me. I soon realised the folly of this and never wore a tie again for work on MM but I resisted the temptation to nip into the loo and remove it, feeling that would make me look even more foolish.
MM’s offices at the time were on the second floor of a large, institutional, six-storey building on the north side of Fleet Street whose doors, back and front, were manned by overweight security men in uniforms and peaked caps. Dissatisfied by the manner of his dress, in 1962 one of these uniformed custodians denied entry to Bob Dylan, on his way to meet a member of the staff.
Many other periodicals published by IPC Business Press occupied the same premises, among them several football and farming magazines, as well as such fascinating titles as Laundry & Dry Cleaning News, Naval Architecture Monthly and Cage Birds Weekly, whose bow-tie wearing editor we affectionately referred to as ‘Joey’. Next to Melody Maker was Cycling Monthly and two doors along was Disc & Music Echo.
Considering that Melody Maker was about to enter its golden age, when the circulation would rise to over 200,000 a week, the offices were fairly underwhelming. Cigarette smoke hung in the air, as it did in every newspaper office I’d worked in, and there was a litter-strewn flat roof outside, accessed by a door in the corner. It was dimly lit with a scuffed parquet floor, dented bottle-green filing cabinets on two sides, old wooden desks, rickety chairs and black manual typewriters that looked to have seen service for a decade or more. The phones were also black and made from heavy Bakelite and the walls were covered in a random assortment of torn and faded posters.
Richard Williams, the assistant editor, had written out some Dylan lyrics and stuck them to the walls. I sat opposite a sign that read: ‘You don’t need a weatherman to know which way the wind blows’ and to my right were the words ‘Don’t follow leaders, watch the parking meters’. Behind Richard’s chair were pictures of Italian footballers, and next to him sat Alan Lewis, the chief sub-editor, whose humour was often dryer than the Sahara.
The vacant desk that I assumed was next to one occupied by features editor Chris Welch, a cheerful, curly-haired fellow whose Melody Maker features and idiosyncratic singles reviews I had been reading for years. Next to him, in a suit and tie, was the urbane, middle-aged Laurie Henshaw, the news editor, a veteran of the swing era, and reputedly something of a ladies man. In the corner opposite Laurie sat Max Jones, the much respected jazz critic who wore a dark blue skullcap and spent much of his day at El Vino’s, the Fleet Street wine bar opposite the building. Max was forever complaining about something or other, a problem with his expenses, the lack of parking facilities or how a ped (his word for pedestrian) had somehow inconvenienced him on his drive to work. Although jazz was his speciality he liked rock music too, at least some of it, and could discuss it intelligently. For this reason he was the first member of my parents’ generation that I met – and one of the very few that I would ever meet – with whom I could relate as if he was a member of my own generation.
There were several empty desks which suggested to me that MM was not operating at a full complement that May day, and I soon learnt that my arrival coincided with a period of editorial instability. The previous editor, Jack Hutton, had just left to launch Sounds, a rival rock weekly, and taken with him a good proportion of the old MM staff. Ray Coleman had arrived from editing Disc & Music Echo and was busy recruiting new staff, me amongst them, with backgrounds similar to his own, young journalists from provincial newspapers like myself. In the coming weeks many other newcomers would arrive, among them Michael Watts, Roy Hollingworth, Mark Plummer, folk writer Andrew Means and sub Neil Roberts, a derisive New Zealander with whom I would play snooker at lunchtimes in the community hall adjoining St Brides Church on the opposite side of Fleet Street. 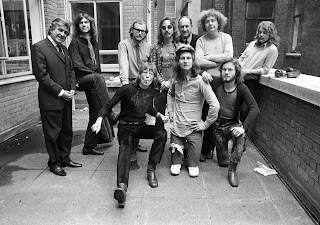 All this was in the immediate future as I bucked down to work that first Monday. It was was very busy, it being news day – the day when the magazine’s news pages (1-4) were filled. Under the supervision of Laurie Henshaw I was assigned to write various short news stories, some of them re-written from press hand-outs, others from information garnered on the telephone. I spoke to Ginger Baker about personnel changes in his group Airforce. Chris Welch was busy putting together the Raver column, MM’s gossip page, which often featured the adventures and opinions of Jiving K. Boots, a fictitious rock star from his home territory of Catford.
The contents of the Raver were fairly random. “Anyone got anything for the Raver?” Chris might ask.
“I saw Georgie Fame backstage at…” someone might say.
Chris got to work: ‘Georgie Fame seen digging …. at …’
At various times during the day I felt like pinching myself to make sure I wasn’t dreaming. Here I was, on the staff of Melody Maker, Britain’s most distinguished rock and pop paper, the magazine that I’d rushed out and bought every Wednesday for years. I’m not quite sure how I expected the offices of MM to be, but it certainly wasn’t like this. This was too ordinary, the offices too drab, the staff too matter-of-fact, the situation too mundane.
I wasn’t quite sure at what time the staff downed tools but when I noticed others leaving, around six, I opted to sling my hook too, though I asked Laurie if he needed anything more from me. He didn’t and I was duly dismissed. It was a far from inspirational introduction to my life on MM but a good deal less onerous than working for the Slough Evening Mail. On the train from Waterloo back to Egham, daydreaming as I passed the Battersea Power Station, I was idly wondering whether it had all been a dream, whether I might I wake up tomorrow and be back at Slough Magistrates Court, once again reporting on the justice meted out to those who drove carelessly on the M4.

Thank you for sharing your thoughts and knowledge on this subject. This is often really helpful and informative, I might like to see more updates from you on informative. It’s really help for to know more information about teeth cleaning Montclair.