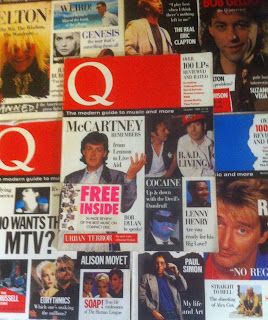 There is a sad inevitability to the news that Q magazine is closing down. I haven’t read it for years though when it first came out, in October of 1986, and for many years afterwards I read it from cover to cover, until around 2000 when its demographic changed and I found myself reading music mags that catered more for my musical tastes.
For years I kept my old Q mags and only when we last cleared out the space beneath the stairs about three years ago was I persuaded to chuck out about 150 copies that had become unloved. Still, I kept the first 10 issues and still have them – that's some of them above – and I also kept the photo supplements (Vols 1-8) which feature some of the best music photography you’ll find anywhere.
Had I still been working on a music weekly when Q first appeared I might have resented its arrival, viewing it as unwelcome competition in what was already a crowded field. The internet was still to happen, CDs were flying off the shelves and Live Aid – no doubt the trigger that persuaded David Hepworth and Mark Ellen to launch it – was fresh in the memory. Q was aimed at a slightly older market than that catered for by the music weeklies and this was why I went for it. Even in 1986 New Musical Express and my old berth Melody Maker were leaving me behind, rightly so too. I had always felt that the weeklies should be staffed by writers from the same age group as their readers.
“Magazines tend to bracket people by taste, or what they assume that taste should be,” wrote editor Ellen in that first issue. “This is a magazine that doesn’t. We don’t presume to know what you like but we hope you like this.” I also liked Q’s slightly cheeky attitude, an irreverence carried over from Smash Hits which Ellen had also edited and which the late Tom Hibbert brought to Q with his often hilarious ‘Who the hell do they think they are?’ pieces.
That first Q featured Paul McCartney on the cover, trailering an interview in which he ‘relives the Beatles’ story for the first time since the death of John Lennon’. Bob Dylan and Lenny Henry are featured inside, along with eight pages on the use of cocaine. In the LPs section Paul Simon’s Graceland gets a five-star review (but R.E.M.’s Life’s Rich Pageant and Talking Heads’ True Stories get only four stars). Bob Geldof’s Live Aid memoir Is That It? gets a good review but Charles Shaar Murray pans my old editor Ray Coleman’s ‘authorised’ biography of Eric Clapton. “Rarely has the subject of an authorised biography emerged as such an unpleasant character, and rarely has an author seemed more oblivious to the implications of his material.” Take that Ray. There was what appeared to be a regular classical record review section and, at the back, a fiendishly difficult pop quiz that I half filled in. Happy days.
Music magazines now, such as they are, definitely bracket people by taste, as Mark Ellen observed and tried vainly to transform. Mojo, the brand leader in 2020, caters to an age group who probably still remember the heyday of MM and NME. Its most recent issue has David Bowie on the cover, circa 1973, the year when MM’s circulation reached its peak of 200,000 a week. On the shelf in my local Sainsbury’s there are more magazines for musicians – for guitarists, bassists, keyboard players – than there are magazines aimed at music fans. And often there are more ‘specials’ that feature one classic act, often Pink Floyd or Led Zeppelin, their contents hewn from old issues of NME and MM, than there are monthly mags.
So today I don’t so much mourn Q as the idea behind it, and the era in which it thrived. For over 60 years, from the golden days of NME and MM, through the years when Q reigned supreme and up to the present day, the British music press has offered opportunities for young writers to hone their skills and, perhaps, become writers of note. Many have succeeded. When any music magazine closes down those opportunities are diminished.
Posted by Chris Charlesworth

I was about 6 months late coming to Q, but when I did, I bought it slavishly up until about 2003, when as you mention, we outgrew each other. For probably a few years before that, I would skim rather than read it from cover to cover. I too, kept all of the back issues, and would spend time going back over them rereading articles as my whims in music changed from week to week. With the input of Hepworth and Ellen at the beginning, it felt like an adult Smash Hits which had been my magazine of choice in the 1980-1985 years.It felt like a natural progression to get Smash Hits and over the years it did broaden my musical outlet, especially in the 90s, when I had thought that "modern music" had passed me by, but around 1995 it opened up all these amazing new groups that invigorated my, at time, stagnation.

I had to throw them all out when I moved to Canada, as I just couldn't bring them (also my Record Collectors). I did however scan loads of favourite articles which I still have.

We parted companies, but I have fond memories of my days of being a Q reader. Really sad to see it go.

Thanks Alan. For me, it's sad when any music mag bites the dust, regardless of whether or not it covered the kind of music I like. They're in my genes.

After the demise of most of the music papers ( NME kept going ) this slot was filled by quality magazines like Q, Uncut and Mojo. I have bought loads of them in my time and probably still got most of them somewhere.