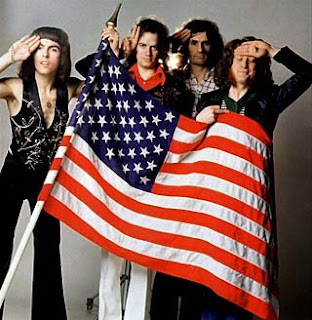 Eighteen years ago last week I saw Slade on stage in America for the first time, in Los Angeles at the Long Beach Arena, supporting The J. Geils Band. It was the same night I found myself in a delicate situation with Faye Dunaway, an incident I recall elsewhere on Just Backdated, but that’s another story.*
Noddy, Jim, Dave and Don visited me in my West Hollywood apartment on Rangely Avenue, the only musicians of any stature to do so during my stay in LA, and the following day I went to their hotel – the Los Angeles Hilton no less – to chat with them. My interview included what may well have been the first ever reference to a “special Slade Christmas single”, though its title wasn’t revealed. Also, intriguingly, Dave mentions “the film of our Earls Court concert”.
This story that I wrote for Melody Maker (3 November, 1973 issue) focuses on their status in the USA; an attempt to put their situation into perspective without erring in either direction. As we now know, they would face an uphill struggle in America but optimism was high in 1973, as it was the following year when I saw them play again, this time in St Louis.**

This may or may not be of interest, Chris. J

Thanks for sharing this blog with us. These Jackets are really amazing. Fashion Jackets depict that we provides one of the best and an unique style Jackets at an affordable cost. Must visit us !!