ALL OR NOTHING: The Authorised Story of Steve Marriott, by Simon Spence 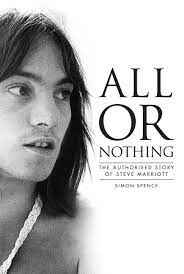 Ill-served in 2004 by Paulo Hewitt and John Hellier’s well-meaning but toothless It’s All Too Beautiful, Steve Marriott gets the biography he deserves in Simon Spence’s unflinching oral history. Insofar as a book can be ‘authorised’ when its subject is 30 years gone and his posthumous affairs in eternal disarray, All Or Nothing has evidently been sanctioned by Marriott’s sister, first two wives, four children and several surviving bandmates, all of whom contribute, but not his third and final wife (and sole heir) whose errant behaviour since his death invites castigation from all concerned.

“The format of an oral biography… makes for an honest, often brutal form of storytelling, especially when dealing with the shadier side of Marriott’s life; the gangsters, addiction, immorality and long-held suspicions over his untimely death,” writes Spence in a concise preface that lists no fewer than 125 interviewees. “[It is] insightful, gossipy, engrossing, frightening and stickily intimate. Here is the man in full, warts and halos, on stage, in studios, backrooms, bedrooms and dark holes.”

Well, bring it on then is the only response to such blatant trumpeting but after winding my way through its 438 pages I can faithfully report that he isn’t kidding. Blessed with a voice that made his rivals weep, Marriott was an inestimably talented musician but, like a few others in this line of work, he threw it all away by living recklessly and alienating just about everyone he met. For better or worse, the extent of his dickhead behaviour is laid out forensically on page after page, the only surprise being that so many of those close to him have authorised such a damning account of his short life.

“He was a very, very naughty boy,” says his aunt Sheila on the opening page, echoing Terry Jones as (Life Of) Brian’s mum and summarising an opinion shared by just about everyone else as we travel through Marriott’s childhood, early acting roles and uneven musical career with the Small Faces, Humble Pie and groups he led himself under the All Stars and other banners. Towards the end, perhaps inevitably, he winds up broke, playing pub gigs for cash as Packet Of Three, having learned absolutely nothing from his many mistakes, misdemeanours and misadventures.

Cocky, opinionated and inconsiderate, Marriott was certainly difficult to like – and the impression is given that it wasn’t really worth the effort. He was also tiny, a few inches over five foot, and this might explain why he was drawn towards tough-guy managers in the belief that these traits would serve him well in a dispute, physical or otherwise. What he failed to realise, however, was that these managers, chief among them the notorious Don Arden and, in America, mob associate Dee Anthony, were unlikely to deal honourably with their clients either. All Or Nothing is full of information about deals that involve decent sums of money, but what little of it ended up in Marriott’s bank account was invariably squandered within days or owed to the taxman.

Arden, who actually comes across as less sinister than his popular image suggests, certainly treated the Small Faces as a commodity to be bought and sold, and though their story has been told many times before All Or Nothing reinforces the impression that, for all the great songs they recorded, the four boys – Steve, Ronnie, Mac and Kenney – didn’t really have a clue about what was going on around them. It’s no secret that when Marriott quit there wasn’t much left in the kitty and the rights to their work wasn’t theirs. Meanwhile, all four, but especially Steve, had acquired a taste for drink and drugs, and while the other three matured in the company of Rod Stewart and Ronnie Wood, Steve didn’t.

Humble Pie, on the other hand, have not previously been under the microscope like this and it’s here where Marriott finds his greatest success which, paradoxically, sends him off the rails, not least because manager Anthony believed that the best way to sell records, and therefore generate income, was by touring endlessly. Drummer Jerry Shirley and bass player Greg Ridley recount endless tales of exhaustion, drugs and money woes, with Marriott spinning out of control, trashing hotel suites and picking fights with men twice his size, blaming his behaviour on an alter-ego, a wrestler called Melvin. (Puzzled? Read the book.) Yet, at the same time he was singing out of the skull, night after night, a pint-sized prima donna beloved of audiences across America, an artist in his element, as good a rock and soul singer as the UK has ever produced, an opinion shared by Bob Dylan, Robert Plant and David Bowie.

Journalist and PR Keith Altham, a shrewd observer of the pop scene for over 50 years, makes the point as well as anyone: “[Dee Anthony] was a clever, powerful man. His way of handling artists was to give them what they wanted. ‘You want more girls? Drugs? Bigger houses? Have them.’ They don’t find out until later that the money was a loan and they’ve got to repay it, and they’re mortgaged to the hilt.”

Meanwhile Marriott treats his women, whether he married them or not, shamefully, friends recoil in horror at his behaviour and he slides into drug addiction and alcoholism. It all makes for an absorbing, if chilling, read; the awful truth laid bare. His death, in a fire at his cottage at Arkesden in Essex 30 years ago next month, is covered exhaustively with a suggestion that questions surrounding it are likely to remain unanswered. And wife number three, to whom he had been married for less than two years, inherited whatever was left but has declined to share it amongst his children. That she winds up in Holloway after a drunk driving incident in which a girl was killed seems like a macabre postscript to an already lurid tale.

As well as the thoughts of those mentioned above, and many more, All Or Nothing contains 24 pages of well-researched pictures, a foreword by Jerry Shirley and a great cover shot by my old colleague Barry Wentzell.