A BAND WITH BUILT-IN HATE: THE WHO FROM POP ART TO PUNK by Peter Stanfield 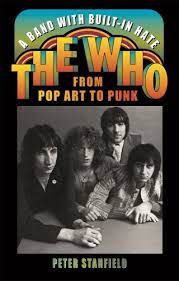 Alone among their contemporaries in the UK, The Who attracted a handful of fans and at least one influential critic who viewed them not just as a lively pop group but as a performance art project conceived by Pete Townshend, aided and abetted by co-manager Kit Lambert. This component of their being, exemplified by their clothes, the auto-destruction and the tone of their early records and interviews, is scrutinised here; not so much a biography as a rather academic thesis on The Who’s role in the cultural environment of the sixties that produced social realism in the cinema, Peter Blake’s pop art, Mary Quant’s mini skirt, Blow Up, great pop music and all the rest of what made the decade swing.

The critic in question, of course, is Nik Cohn who believed that the best pop was transient, a sudden explosion followed by nothing else, much like the climax to a Who concert. Long careers and earnest expressions in pop were anathema to Cohn whose acclaimed 1969 book Pop From The Beginning expanded on this theory, arguing that once good taste triumphed over trash it was all over. Still best known for his story in New York magazine that formed the basis of the movie Saturday Night Fever, Cohn wrote a provocative music column for Queen magazine in the sixties, and the point is made that unlike the music press Queen did not rely on record company advertising to stay afloat, thus permitting Cohn to adopt a ‘critical honesty’ he might not have enjoyed elsewhere. Such honesty appealed greatly to Lambert and Townshend, both of whom disdained the hypocritical, PR-driven showbiz culture that infected pop.

Insofar as he loved to demolish sacred cows, Cohn’s writings reflected the same lapse in deference to authority as shown by the Mods and Rockers clashing on Margate beach or Mandy Rice-Davies’ famous ‘Well he would, wouldn’t he?’ response during Stephen Ward’s trial. In The Who, and Townshend in particular, Cohn found his champions, so it’s no surprise that he gets almost as much space as the group in A Band With Built-In Hate.

Thanks to Townshend and Lambert, The Who were arty, clever, stylish, revolutionary and, with Keith Moon’s gleeful help, subversive. ‘Attitude as style, style as attitude’ was Lambert’s dictum and Stanfield, Emeritus Professor of Film at Kent University, sets out his credentials in the book’s first chapter, an impressive essay on how social realism dramatically changed film-making and so enthused Lambert and his more pragmatic business partner Chris Stamp. Furthermore, he intriguingly draws attention to The Who’s seldom-seen film début, Carousella (1965) in which they appear, for a few seconds, as background colour in a short X-rated documentary about Soho strippers.

Such in-depth research warmed me to his book. Stanfield is no less impressive on Mods and Pop Art, both of which were adopted and abandoned by The Who in 1965 and 1966, and on their early singles, which he examines forensically, and with great insight, in Chapter 3. He’s also impressed by their LP artwork. “There is nothing po-faced, pretentious or obscure about this sleeve,” he writes about Alan Aldridge’s cover for A Quick One. “It is glossy, colourful, superficial, humorous, self-depreciating, commercial and fun. It is Pop!” He’s equally enthused about Sell Out, but quotes others, notably Cohn, over his own opinions.

It’s slightly droll to imagine that, unbeknownst to the other three, Townshend envisaged The Who as an extension of his studies at Ealing Art College and might even have abandoned the group once he brought the experiment to a conclusion. ”Obsolescence was a given in [Townshend’s] concept of the band,” writes Stanfield at one point, adding weight to the theory. If true, Townshend clearly decided at some point to carry on with the band, no doubt because he realised he could make a decent living from it and/or because it would have been churlish to let the others down.

Either way, Stansfield’s book loses some of its purpose, at least as far as The Who are concerned, once these objectives have been achieved. From around the midpoint he devotes as much space to what is going on around them, and to lengthy passages about Cohn’s Pop From The Beginning and, to a lesser extent, his 1967 novel, I Am Still The Greatest Says Johnny Angelo, about the rise and fall of the titular pop star. Thereafter he deals with Tommy, and Cohn’s role in its conception, and how it brought The Who into the mainstream. Discussion on Leeds and Who’s Next follow but unlike in the first three chapters Stansfield relies more on quoting other critics – whose opinions I’d read before – than offering his own take which is a shame, because I enjoyed what he had to say earlier. Much of the chapter on Next is about politics, youth cults and rock revivalism, somewhat tangential to The Who, who by this time were rock superstars and of less interest to critics favoured by the author whose mission was by and large to seek out the new. Much of the final chapter is about punk and The Who’s role as founders. Oddly, there is little mention of Meher Baba’s influence on Townshend, none at all of his confrontational columns in Melody Maker and scant appreciation of the excitement generated by The Who’s stage shows, nor of their skills, when they were in their pomp.

Nevertheless, Stanfield is probably right when in his Conclusion he writes, “[what]... had originally driven The Who, the desire to flaunt convention, to remake one’s world, to refuse the easy way, to contest what it means to be a pop product… had all started to come to an end… around the time of Quadrophenia.” And he’s definitely right when, later in this concluding chapter, he asserts, “Whether they liked it or not The Who were now in the business of making heritage products, selling their fans the comfort of consuming the already experienced.” Still, as Cohn put it, and Stanfield concludes his book, “The Who played longer, harder, and straighter, for the people than anyone else,” a view with which I have always concurred.

With 280 pages, A Band With Built-In Hate: The Who From Pop Art To Punk is an easy but by no means breezy read, well researched and notated, and illustrated thoughtfully throughout in black and white. Just published, it brings together some significant criticism of The Who, connecting them with all manner of cultural references, and is a valuable addition to my ever-expanding Who library. That The Who continue to be so well-served by knowledgeable authors is a tribute to their importance.

Interesting read as always, Chris. Thanks for sharing your thoughts.

thanks for the review chris in the states the book was called "rock from the begining" i first read that book in my high school libaray BTW it was the first rock book ive ever read then next was the who by gary herman also from the libary cheers mate !