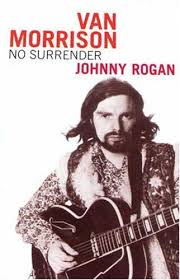 Two days before my friend Johnny Rogan passed on January 21 this year I received an email from him drawing my attention to an article by Niall Brennan in Untold Dylan, a scholarly Bob Dylan fanzine, published in July 2020. In it the author posits the theory that Dylan’s song ‘Goodbye Jimmy Reed’ from Rough And Rowdy Ways was inspired by a passage in No Surrender, Johnny’s Van Morrison biography.

In his email to me Johnny wrote: “I’ve just been sent some scholarly articles, one in the Dylan academic zine Isis, and another below. Both make mention of the theory that Dylan’s song ‘Goodbye Jimmy Reed’ on his last album Rough And Rowdy Ways was inspired by my Morrison book No Surrender. Read on. What do you reckon? Anything that connects me with Dylan is just all right by me...”

“That’s fantastic,” I responded. “Good on you. Hope to get together soon when the Covid restrictions are relaxed.”

I never heard back from Johnny.

In his piece Brennan writes about the song ‘Goodbye Jimmy Reed’, offering a brief biog of Reed before analysing the song and, finally, drawing attention to the passages in Johnny’s Van Morrison book that bear a remarkable resemblance to some of its lines. Below is the relevant passage.

One of [the] new songs is of a quite different nature to Jimmy Reed’s city blues. ‘Key West’, the stately, paced, gorgeous meditation on time, nature, and happiness that closes the first record contains a multitude of beautiful lines and imagery. One in particular struck this listener on first hearing.

I’m searching for love and inspiration

On that pirate radio station

Coming out of Luxembourg and Budapest

Aside from the fact that Radio Luxembourg was not a pirate radio station, both it and Radio Budapest feature in Dylan’s fellow music expeditionary Van Morrison’s song ‘In the Days Before Rock and Roll’ from his 1990 album Enlightenment. In these lines, narrated rather than sung by Irish poet Paul Durcan, the speaker is on his knees,

At those wireless knobs

And I’m searching for

When Durcan finds the station he and Van need, the song proceeds in a most Morrisonesque manner deep into Proustian reverie, namechecking such heroes as Fats Domino, John Lee Hooker, Elvis Presley, Muddy Waters, Little Richard, Ray Charles and so forth, in a remarkably similar cathartic fashion to Dylan’s invocation of his cultural heroes, via the legendary DJ Wolfman Jack, that closes the majestic ‘Murder Most Foul’ on the second disc of his new album.

Thus we find Dylan and Morrison, two old soldiers, raised on the old records, paying homage with the help of old radio stations and late DJs to the crackling sounds that first alerted them to the world outside their northern homes. Touching that dial, turning that wireless knob just a little brings us back to those Dylanesque incongruities the listener might skip over on first hearing in his Jimmy Reed homage. But as with much of Dylan’s work, with a little diligence, secrets can be uncovered.

Considering the first verse of ‘Goodbye Jimmy Reed’, the very Northern Irish derogatory word for Protestant, ‘Proddy’, made this listener think of Belfast soul man Morrison again. This lead to a search through Johnny Rogan’s magnificent 2005 biography Van Morrison: No Surrender, and aside from an entire chapter entitled ‘Are You A Proddy?’, uncovered several further references, some oblique, some quite precise in the lyrics of Dylan’s ‘Jimmy Reed’ song. An initial study revealed the following (page numbers are noted in parentheses).

‘I live on a street named after a Saint’, Dylan begins. Rogan quotes Morrison directly in this childhood memory: "Catholics all went to schools named after saints and Protestants went to schools named after streets" (40). Further down the same page Rogan describes the volatility that existed between young Catholics and Protestants in the Belfast of Morrison’s youth, and the various ways respective faiths could be identified from afar. In the same way 20th century blues musician Reed could never fully escape the societal divide brought about by a century of American history, the struggling musicians of Belfast similarly had to walk a careful line, keeping their distance in a very literal societal divide. ‘I can tell a Proddy from a mile away’, Dylan continues, as later on the same page of his biography Rogan quotes a childhood friend of Morrison’s: ‘you could tell by looking at somebody if they were a Protestant’ (4). The contents page of Rogan’s book tells us of a later chapter’s title: ‘Are you a Proddy?’, referring to an incident years later when comedian Spike Milligan would query the more elderly Morrison on the nature of his tribe. But is this sufficient evidence that Bob Dylan might have shoehorned the word ‘Proddy’ into a tribute to one bluesman as a wink to a second?

In the next verse, Dylan’s accounting of the young Reed’s first attempts at playing to an audience is remarkably similar to Rogan’s account of Morrison’s early band, the Monarchs. ‘You won’t amount to much the people all said, because I didn’t play guitar behind my head’, Dylan sings of Reed, while Rogan tells how ‘the Monarchs enlivened their stage act ...playing guitars behind their heads’ (42). And again, Dylan: ‘never took off my shoes and threw them into the crowd’ and Rogan: ‘the famous Morrison trick of taking his shoes off on stage’ (44).

For those who know Belfast, the world-renowned Crown Saloon has been a favourite watering-hole for generations, but given the more complete cliche used by Dylan in ‘I’ll put a jewel in your crown’, reading the opening few pages of Rogan’s book we find, in referring to the boyhood Morrison’s educational opportunities, his area ‘included a number of inner city schools in the scheme with Orangefield [Morrison’s school] regarded as the jewel in the crown’ (25).

So,did Dylan have Rogan’s book to hand when composing this song for the late Jimmy Reed? Has he at the same time crafted a tribute to his friend and fellow Reed fan, Van Morrison? We could suppose further. Perhaps Reed’s butcher’s hook is not only a reference to his time at the Chicago meat plant, but also a darker reminder of the so-called Shankhill Butchers, a Protestant gang who spent their nights getting high and kidnapping Catholics to torture and kill. Killing floor indeed.

But there is one further moment, from late in Rogan’s book, and later in Morrison’s life. He has found love with former model Michelle Rocca, and in the throes of love, Morrison has written and recorded one of his lesser works. The song is called ‘Perfect Fit’, which in Rogan’s opinion is ‘a transparent paean to [Morrison’s girlfriend] Rocca’ (434). Morrison’s love song contains the line ‘see that dress you’re wearing baby suits you right down to the ground’. Dylan’s song, of a different hue, goes: ‘transparent woman in a transparent dress, it suits you well I must confess’. Let the listener and the reader judge for themselves what Dylan might be referring to here.

Dylan’s song concludes with him meeting a friend, a brother, seeking out the resting place of their mutual ancestor: ‘God be with you, brother, dear’, Dylan invokes once more, and one can’t help but recall the 1989 BBC Arena documentary that brought both of these singers together on the Hill of the Muses in Athens, to sing each other’s songs for a while in the setting sun.

One hopes that Jimmy Reed might have approved, from down in his metaphorical Virginia.