THE REMARKABLE TALE OF RADIO 1: THE HISTORY OF THE NATION’S FAVOURITE STATION 1967-93 by Robert Sellers 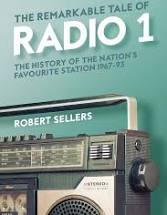 Unwelcome, misunderstood and barely tolerated by the hierarchy at the BBC, Radio 1 was for many years the Corporation’s unloved bastard child. Its parents, loathed to an even greater extent, were the pirate radio ships that took to the UK airwaves between 1964 and 1967, chucking egg in the faces of the stuffy old Beeb as pop fans throughout the UK disdained the fogyish Light Programme and tuned in their thousands to Caroline, London and all the rest.

So, when the Labour Government of the day brought in the Marine & Broadcasting Offences Act to sink the pirates, it was clear to the BBC that since the nation’s appetite for non-stop pop was here to stay they had better to do something out it, albeit very reluctantly. Their solution was Radio 1 which, in its own way, continued to chuck eggs in the same direction by becoming the country’s most popular station, proving the rule of thumb that you cannot legislate against something people like – if that wasn’t the case the “War on Drugs” would have been won 50 years ago.

So it was that on the morning of 30 September 1967 the “cheery” DJ Tony Blackburn, a refugee from Caroline, launched Radio 1 and, like it or not, it’s been the country’s premier pop station ever since. Its struggle for survival in the early days, its ups and downs, and its heroes and villains, are covered extensively in Robert Sellers’ The Remarkable Tale Of Radio 1: The History Of The Nation’s Favourite Station 1967-93.

According to this book, the reality is that Radio 1’s existence has been a constant battle between the traditionalists on the one side and the progressives on the other, with each step forward resisted by the established powers, not only those at the top of the BBC itself but also the Musician’s Union, who viewed the playing of records as a danger to their members’ jobs. It’s hard to believe that for years the playing of records in the top ten on the radio was monitored by upholders of archaic cultural values, the sort of people who write letters to The Daily Telegraph from Tunbridge Wells and like to blame everything they don’t like on those with progressive ideas. The ongoing crusade is an almost endless theme of the book, tapering off somewhat after the two-thirds mark at which point it becomes less interesting, and it’s a given that after 1993, the point where the book ends, things finally loosen up.

We hear from all the relevant sources, executives, programmers, producers and, most of all, the DJs, some of who are in it for the music, others for the glory and opportunity to move on to TV, fame and fortune. Invariably they are the less likeable. No one likes the odious Jimmy Savile, which is a relief, and John Peel comes across someone the establishment would love to dump but can’t because he’s so popular. Blackburn, on the other hand, is a bit of a prima donna.

Sellers has done his research well, talking to all the right people and his book will certainly go down as a definitive history the nation’s ‘favourite’ radio station. Then again, there hasn’t really been that much competition has there?

Good day to all viewer online am so happy sharing this great testimony on how i was checking for solution in the internet then miraculously i came Across Dr OBUDU the powerful herbalist that Cure Numerous individuals Herpes Simplex Virus,so I contacted him base on the testimonies I?m seeing about him on the internet, I was cured too by him, kindly contact him today through his email he can help you email ; drobuduherbalhome@gmail.com OR WHATSAPP +2349023428871 Website: https://drobuduherbalhome.wixsite.com/welcometoobuduherbal and so he can cure types of diseases like,HEPATITIS B,DIABETICS,CANCER,HPV,LOW SPERM CAM HIV/STDS FIBROSIS LOST OF WEIGHT .. all thank to you Dr OBUDU for your kindly help in my life