JAMES JAMERSON OR CAROL KAYE: WHO PLAYED WHAT? 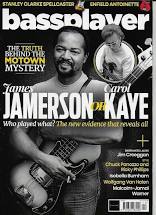 I have twice contributed to bassplayer magazine, on both occasions eulogising the unique skills of John Entwistle, and this irregular involvement entitles me to free copies, courtesy of its editor Joel McIver, from whom I commissioned many books for Omnibus Press. His best-selling book was a biography of Metallica that was translated into several languages but the first, in 2000, was a handbook for fans of Extreme Metal. You can find a picture of Joel in every issue of bassplayer, top left on page 4, above a brief resume of what that month’s issue contains. He’s bearded and brandishing a sturdy looking 4-string bass guitar with a religious cross and stag’s head etched on its body, which could imply that he’s still au fait with the rituals of the bands he wrote about in that book, though in reality they're the logo of Jagermeister, a herbal liqueur favoured by heavy metal fans.

Not having played bass since I was a teenager, I only occasionally find anything to interest me in the magazine, usually features on bassists I’ve known over the years, among them Roger Glover of Deep Purple, which enabled me to reconnect with him and become involved in a project that might see the light of day in a year or two.

This month, however, bassplayer includes something quite different that interests me, a fascinating article on two of the greatest bass players of all time, James Jamerson and Carol Kaye, specifically a sort of “who played what” investigation. There’s a controversy here too.

Jamerson, of course, was the Motown Funk Brothers bassist who played on countless records that spun out of Hitsville USA at 2648 W. Grand Boulevard, Detroit, Michigan, and died in 1983 aged 47, an indirect result of his alcoholism. Many regard him as the man who made the sixties swing and America dance. 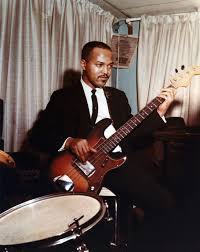 Kaye, now 86, worked out of Los Angeles and played on thousands of recordings during a 50+ year career, including some Motown sessions which have been disregarded by scholars inclined to favour Jamerson. She now alleges, probably correctly, that some of her work has been wrongly attributed to Jamerson. 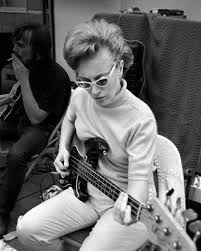 All this might be pretty small time compared to the problems – sorry challenges – the world faces these days, but without knowing it I was a huge fan of Jamerson in my days as a DJ in Andertons Bar in Skipton back in 1968, and probably before. In the discos they played their Motown loud, and the bass lines stood out. Motown, however, never credited the musicians who played behind The Supremes, Vandellas, Four Tops, Temptations, Miracles, Stevie W, Marvin and all the rest, so how was I to know I was tapping my feet to James Jamerson?

I didn’t really realise this until 1985, when, on behalf of Omnibus Press, I bought the rights to Where Did Our Love Go? – The Rise And Fall Of The Motown Sound by Nelson George, an unauthorised but extraordinarily revealing book on the label that for the first time told the behind-the-scenes story and gave due credit to the musicians who were as responsible for the Motown Sound as the stars themselves. Jamerson figured prominently, and the book led me to Standing In The Shadows Of Motown (1989), a book about Jamerson that included two cassettes of his bass lines isolated from the rest of the tracks. A bit nerdy I know, but those bass lines were so lyrical, so full of invention, or so goddam funky, that it was worth the effort to listen. Man, could he play.

“The Motown producers rarely wrote detailed arrangements for Jamerson,” wrote George. “Instead they’d hand him a chord sheet or have him listen as the melody and lyrics were run down on piano by Brian Holland or Norman Whitfield, and he would build the bass line around what he heard.” Bassist Louis Johnson, who played on Michael Jackson’s Off The Wall and Thriller, told George: “Jamerson brought the triplet feel on bass to pop. Before him it was unusual for the bass to deviate from that single note, dum-dum-dum style Jamerson broke the mould and made the bass more creative.”

Carol Kaye, equally well regarded, doubtless outplayed Jamerson in terms of total work accomplished, and in her book Studio Musician (2016) and on her own website, has attempted to correct any misconceptions about who played what. Her first session, in 1954, was with Sam Cooke, so her CV is as illustrious any in the game.

And while it’s not unreasonable to assume that, since Jamerson spent most of his working life in Detroit and Kaye in Los Angles, Kaye took over when Motown moved its headquarters to California in 1972, it’s not that simple. Which is why bassplayer has interviewed Brian F. Wright, Assistant professor of Popular Music at the University of North Texas in Dallas, who has dug deeply into the who played what controversy. I won’t divulge the contents of the interview, or the link to the website where Wright’s dissertation, Reconstructing The History of Motown Sessions Musicians: The Carol Kaye/James Jamerson Controversy, all 11,292 words of it, complete with annotated lists of sessions and those who worked on them, can be found, but it makes great reading for anyone interested in a story that didn’t quite keep me on the edge of my seat but was well worth an afternoon’s reading.

Email ThisBlogThis!Share to TwitterShare to FacebookShare to Pinterest
Labels: Soul/R&B/Mobo

Not apropos to this post, but I wanted to let you know that I saw you on a segment of a series on PBS in the States called "Icon: Music Through the Lens" commenting on the photogenic attributes of The Who in concert. Nice to see and hear the author of Just Backdated on video.

Keep up the good work.

Thanks Keith. I write about the Icon series here: https://justbackdated.blogspot.com/search/label/Rock%20Photography
Chris C