MY FIRST WEEK ON MELODY MAKER – A REVISED ACCOUNT

Any Just Backdated readers who subscribe to Rock’s Back Pages, the online music press library, will find among this week’s new features my interview with jazz guitarist George Benson, published in Melody Maker dated 5 February, 1977. Normally this would not be cause for comment, as RBP often adds pieces by me to its website and now has no fewer than 324 in total, the vast majority from the seven years I spent in the service of MM. However, this particular interview might well be the very last piece I wrote for the paper as I had just handed in my notice, and still have in my possession the letter of acknowledgment I received from editor Ray Coleman, which is dated 27 January, 1977.

“Thank you for your good work for the paper and best wishes for your future,” writes Ray, who interviewed me for the job on MM seven years earlier, in the spring of 1970. 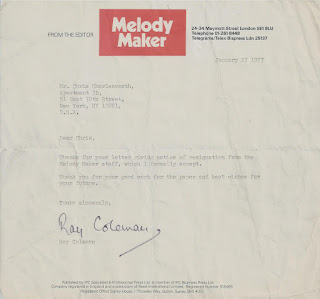 By a strange coincidence, I very recently came across what might well be the first issue of Melody Maker that carried anything written by me. It is dated 27 June 1970, a bit later than I thought when I wrote in May of 2020 that I joined MM ‘on the first Monday in May, 1970, 50 years ago today’. Through a process of deduction, I now realise I was about six weeks out.

It’s nowadays possible to find scanned copies of MM on the internet and through this means I’ve discovered one dated 6 June, 1970, in which my name does not appear on the staff list, and another dated 27 June when it does. I cannot find the copies for June 13 and 20 on the internet but from all this I can glean that I joined between these dates, and one of those missing copies, albeit one for which I contributed next to nothing, must therefore represent the week I first landed on MM.

Elsewhere on Just Backdated you can read an account of my first few days on MM in which I mention the first LP I was given to review. The 27 June MM contains this review, of Soft Machine’s Third, for which I solicited some help from a friend who knew their music better than I. “It is their most ambitious yet,” I – or should I say my mate Steve – wrote, demonstrating a knowledge I did not possess. After a bit of flannel gleaned from the credits “I” conclude: “A good set for the Soft’s fans and jazz enthusiasts too.”

Wisely, Richard Williams, the assistant editor, whose job it was to distribute LPs to MM staff to review, never gave me another Soft Machine album to write about.

Since the dates on the cover of MM were for the Saturday of the week of its publication, I can infer from all this that I must have turned up at MM’s Fleet Street offices for the first time on Monday, 15 June, 1970. My reasoning is that because it went to press the following day I wouldn’t have had time to write anything of substance for that week’s issue (20 June), but in the days that followed Ray Coleman set me to work with a vengeance, as the saying goes.

And I’m not kidding. On page 5 on the 27 June issue there’s my interview with Paul Rodgers, the first of many pieces I would write about Free; on page 7 there’s my (uncredited) interview with Don and Phil Everly, conducted in their suite at the Inn On The Park Hotel near Hyde Park Corner, where I recall sharing the elevator with Dustin Hoffman on leaving; and in a ‘Chartbuster Spotlight’ feature on page 13 you can find my phone interview with Cliff Richard to mark the arrival in the charts of the excruciating ’Goodbye Sam, Hello Samantha’, not an opinion I expressed to him or in my piece; and also my brief interview with ‘Mike’ Rossi – Francis must have come later – whose group Status Quo was switching styles from the psychedelia of ‘Pictures Of Matchstick Men’ to the down home and ultimately far more successful boogie of ‘Down The Dustpipe’, which was at number 18 in the charts that week.

And talking of Status Quo, there’s also my review of their show at St Mary’s College, Twickenham, where they performed at the annual rag ball, one of two ‘Caught In The Acts’ I wrote that week. The other was on Pete Brown’s Piblokto at the Marquee, but Status Quo sticks in the mind because I was invited to review it by none other than the notorious PR Max Clifford who had fixed up the Rossi interview and promised to ‘bring a bird’ for me if I came to the show in Twickenham. No doubt the late publicist, who subsequently became the master of ‘kiss and tell’ and suffered an ignominious downfall, had clocked a new name on the MM staff list and decided he was ripe for placing in a compromising situation. (The full story can be found here: http://justbackdated.blogspot.com/2017/12/max-clifford-rip.html)

All the work that landed in my in-tray that first week is perhaps explained by the fact that only three ‘staffmen’ appear in the staff list on that 27 June issue of MM: jazz expert Max Jones, old timer Chris Hayes, whose sole contribution in those days was the Any Questions column, and newcomer Charlesworth. (The 6 June issue lists only Max and Laurie.) Chris Welch, next to whom I sat, was the Features Editor and Laurie Henshaw, another old timer who, bless him, probably thought Free was something you didn't have to pay for, was News Editor. Within a month all that would change, and I would be joined by Michael Watts, Roy Hollingworth, Mark Plummer, Andrew Means and Neil Roberts. By then I’d superseded Laurie as Melody Maker’s News Editor, much to my surprise, as only six weeks earlier I was a staff reporter on the Slough Evening Mail, reporting not on Status Quo’s change of musical direction but the penalties imposed on miscreants at the local magistrate’s court. Onwards and upwards.

Happy memories and Ray certainly kept you busy. I remember we first
met at a rock festival with Barrie taking the snaps - was it Bath? We
were most impressed by your flashy sports car that you'd driven
to the gig. We somehow thought you must have been very well
off and living in a West End penthouse. Was Francis called
'Mike' Rossi then? Another exclusive story! I remember Max
Clifford tried to sell me a second hand car. Glad I didn't buy it...

Good day to all viewer online am so happy sharing this great testimony on how i was checking for solution in the internet then miraculously i came Across Dr OBUDU the powerful herbalist that Cure Numerous individuals Herpes Simplex Virus,so I contacted him base on the testimonies I?m seeing about him on the internet, I was cured too by him, kindly contact him today through his email he can help you email ; drobuduherbalhome@gmail.com OR WHATSAPP +2349023428871 Website: https://drobuduherbalhome.wixsite.com/welcometoobuduherbal and so he can cure types of diseases like,HEPATITIS B,DIABETICS,CANCER,HPV,LOW SPERM CAM HIV/STDS FIBROSIS LOST OF WEIGHT .. all thank to you Dr OBUDU for your kindly help in my life