THE BEST OF JAMMING: Selections and Stories from the Fanzine That Grew Up, 1977-86. Edited by Tony Fletcher 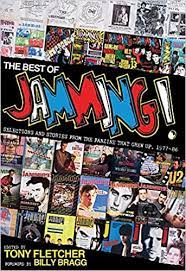 Initiative is a key weapon in the armoury of the aspiring rock writer who wants to go places, especially if they’re starting from zero and only 13. This was the age at which Tony Fletcher began what would become his mission in life, kick-started by his love of The Jam and a 1977 Sounds article in which Jon Savage eulogised about fanzines.
Sounds like fun, thought Tony who days later began assembling his first fanzine, In The City, which by issue two had become Jamming. Published sporadically for the next nine years, it ran to 36 issues, closing in 1986 and laying the groundwork for a career that now encompasses around a dozen books, all of them commendable, some of them big sellers, writing for music mags, hosting TV music shows, DJ-ing at clubs and on radio, and acting as a director for a rock academy in Woodstock in upstate New York, close to where he has lived for the last 30 years.
I’m proud to have been a stepping stone along the way to all this. As editor at Omnibus Press between 1983 and 2016, I was largely responsible for the publication of five books by Tony (on Echo & The Bunnymen, R.E.M., Keith Moon, The Clash and Hedonism, a novel) and bought the UK rights to a sixth about the musical history of New York. In the course of all this I developed a professional relationship and close friendship with Tony so it follows that I am sympathetic towards his work; then again, in the unlikely event that he’d dropped the baton I’d have said so.
The Best Of Jamming is precisely what it says it is, a compilation of what Tony considers to be the best of the articles, interviews and reviews from the fanzine that he published, and although the writing wasn’t all his own work, many of the interviews with the biggest stars, among them McCartney, Townshend (twice), Weller, Buck, U2, Strummer, Morrissey, McCulloch and Costello, were done by him.
Look at that list again. And again. This was not NME, or MM, or Q, or any of the established musical papers in the UK or elsewhere. This was a fanzine published by a kid who had the bottle to request interviews with the biggest stars of the day, and some from the previous decade, who somehow managed to get them to agree to talk to him or others, all through his own initiative and ambition, for his own little magazine.
All these and many, many more are included in this compilation, 386 pages of extracts, all of them facsimiles from the pages of Jamming from issue one to the final one, each prefaced by an introduction from Tony that explains how each issue was put together that often emphasises the seat-of-the-pants nature of fanzine publishing. Take this from Jamming Issue 24: “Behind the scenes, Jamming had fallen apart. Financing a monthly magazine from an overdraft at my mother’s bank was insane… Barclays finally realised they’d backed the wrong horse and shut down the pipeline. I couldn’t pay the printing bills and issue 24 stalled on the presses. Frantic phone calls finally found our saviour in a pair of Jewish South African émigrées… Jamming 24 finally rolled off the presses around Christmas Day… the so-called holidays remain a personal blur.” 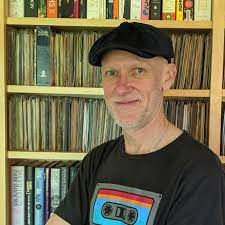 These newly-written previews to each issue are almost as entertaining as the interviews themselves. What seemed clear to me as I read some of them this week was that Tony and the other young writers who contributed to Jamming were young and fearless, less inclined to show the deference that older, more established writers might show towards the eminence grise of rock.
Perhaps inevitably I was drawn towards Jamming's relationship with The Who. “I found the last few [Who] albums embarrassing,” Tony remarks to Townshend in 1985, referring to Face Dances and It’s Hard. Pete doesn’t seem offended by this upstart’s impudence and, after batting away the question with practised aplomb, he goes on to agree with Tony that The Who’s 1984 live album Who’s Last was, indeed, embarrassing, “because it’s competent,” he says, implying that competence was not what The Who was ever about. It's a point well made. “The last years of The Who were so desperate,” he adds. Townshend is noted for his candour but he’s rarely been as candid as he is the two interviews presented here.
Finally, I should add that Billy Bragg has written a fine Foreword to this collection. In truth, Jamming in its entirety offers as good as review of the state of rock music during the eighties as you’ll find anywhere. My only slight criticism is that some of the text is difficult to read insofar as the type is tiny and coloured backgrounds occasionally obscure the words on the page.
Posted by Chris Charlesworth

what a fantastic blog this is i have been reading a lot of these posts with sheer amazement. One post I wanted to ask about was one going back a few years about Ashley Pandel. I'm just reading the Blackie Dammett autobiography lords of the sunset strip and Ashley is mentioned a lot. With the recent passing of Blackie I wanted to ask if you ever met him and had any thoughts on him. Best wishes

Never met him, sorry. I was aware that Ashley knew Blackie well though.