A FURIOUS DEVOTION: THE AUTHORISED STORY OF SHANE MACGOWAN by Richard Balls 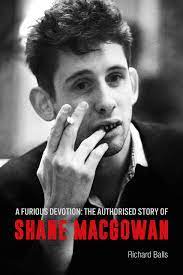 With his uncombed hair, rotten teeth and charity shop clothes, not to mention the obligatory bottle, Shane MacGowan presented himself to the world as a drunken lout – but behind this fortuitously crafted image lurks a man of keen intelligence, deep artistic sensibility and shy vulnerability. Also, like many of our best rock stars, much of what he says can be taken with a pinch of salt.

That’s the picture drawn by Richard Balls in A Furious Devotion, a biography evidently sanctioned by MacGowan despite its constant allusions to a lifestyle unlikely to promote longevity. Still, against the odds, MacGown is still with us, for which we can be thankful for his songs, especially those on the early Pogues records, retain the timeless sparkle of so much Irish music, old and new. Indeed, I was so enamoured of Rum, Sodomy And The Lash that at Omnibus Press I commissioned the first ever biography of the group, The Lost Decade by Ann Scanlon, published in 1988. Thirty-three years later there is no shortage of fine writing about The Pogues and their frontman, and this latest book, 334-pages long, is a worthy addition to an ever-expanding library.

Irish to a tee, it comes as something of a surprise to read that Shane spent many of his formative years in Tunbridge Wells, that quintessentially middle-class English town in Kent from where ‘Disgusted’ writes to The Daily Telegraph about insufficient deference being shown to royalty. Holidays, however, are spent in Tipperary, the home of his ancestors who crowded into a small stone house known as The Commons where his great-grandparents reared 11 children. This Irish heritage, we learn, was key to MacGowan’s personality, along with the literature he hoovered up like the cocaine and other class-A drugs that came later.

MacGowan’s love of books ensured he had a decent education, and he might have become a serious writer had music not taken him in another direction. A move to a flat in the Barbican and a tolerant father left him free to roam the streets of London where he became an early convert to punk, seeking out the Sex Pistols and becoming a face at gigs, famously finding himself in NME, photographed at the 100 Club during a Clash gig with blood spurting from his ear. “It gave him a kickstart didn’t it?” says Jane Crockford, later of The Modettes, who may or have not have drank Shane’s blood that night. It also set in stone the image of Shane O’Hooligan, she could have added.

From there it’s a short step to The Nipple Erectors, MacGowan’s first band who worked hard for little reward, and then The Pogues whose trajectory is exhaustively logged, from Camden pubs to the world’s arenas. Shane, however, seems not to enjoy the spotlight but his reaction to fame and success is not always predictable: consuming a Herculean amount of drink and drugs is one thing but eating a Beach Boys hits album to prove some point about American culture is quite another.

The central part of the book, which offers grim details about Shane’s disintegration as The Pogues become massively popular, is particularly strong, eye-opening too. Their manager Frank Murray’s insistence on working the group into the ground is partly responsible, but the rest of the band, while by no means abstemious, don’t match Shane’s intake and ultimately face a difficult choice: sack their talismanic frontman or watch him collapse into an early grave. They’re a loyal bunch but enough is enough, and when Shane does make the leap everyone – not least Shane himself – is in a better place, temporarily at any rate.

Along the way we learn that Shane does not value material possessions, preferring to live in rented pigsties than a comfortable home he could afford to buy, in keeping with his casual disregard for money; that his preferred suitcase is a black bin liner; that he watches TV a lot, often the same films over and over again; that he gets into fights, frequently on the losing side; doesn’t relish the company of other celebrities; is loyal to old friends; scribbles lyrics on whatever surface is to hand, including walls; and is terminally unfaithful to a stream of girlfriends who invariably forgive him his trespasses, even Victoria Clarke who eventually marries him.

Contradictions abound, with Shane making assertions about all manner of things that others in his circle dispute, the inference being that he makes things up, sometimes for the benefit of journalists, many of whom, by and large, he loathes. It is to Richard Balls’ credit that while noting many of Shane’s less plausible claims, he finds a soberer friend to refute them, and we are left to make up our own minds. I sided with the sober.

Free of The Pogues, Shane forms The Popes, and seems happier, largely because he alone calls the shots, but although they match The Pogues as a live force, their record sales plummet, perhaps because Shane’s best songwriting years are behind him. This, says Victoria, was ‘very frustrating’ for him, commenting on how some writers work laboriously on their craft while for others it’s a more organic process. “He just gets it all,” she says. “It comes through, he’s hearing the tune, the words are coming. So, for him to have that sense that it wasn’t coming through meant he was cut off from his channel.”

In the Nineties The Pogues reform for selected dates, Shane amongst them, which shores up everyone’s bank accounts but before long they tire of one other and it doesn’t last. Shane looks elsewhere to nourish his creative thirst, with some success, but there’s a feeling his present is contingent on his past, those wonderful songs like ‘A Rainy Night In Soho’, ‘A Pair Of Brown Eyes’ and, most especially, ‘Fairytale Of New York’. By the end of the book, Shane has reformed his ways, to a certain extent anyway, and even acquired a new set of teeth. Now confined to a wheelchair due to a damaged hip, he’s content to do very little, his drinking reduced to a trickle compared with days gone by, revered by fellow musicians, especially those with a hint of green in their psyche, an Irish national treasure. 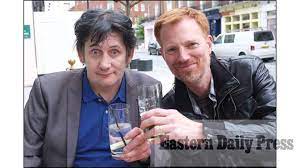 Shane with the author, Richard Balls. (Pic by Paul Ronan)

The book is well illustrated, with three eight-page photo sections, many in colour, as well as black and white pictures throughout. There’s a comprehensive MacGowan discography, copious notes and credits – Richard Balls lists over 60 interviewees – and a 10-page index. A Furious Devotion is a thorough, occasionally moving, often hilarious, warts and all biography of a man you don’t meet every day.