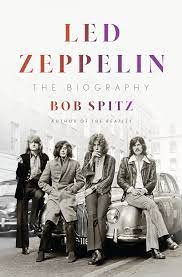 It’s a tug-of-war as mighty as Led Zeppelin itself. On one side we have Jimmy Page, Robert Plant and John Paul Jones all steadfastly maintaining a discreet reticence about Led Zeppelin’s extra-curricular activities and on the other we have authors continually writing books that do the precise opposite, sparing no one’s blushes in reiterating “infamous stories from the road, tales of excess, dominance and ego” in the words of uber-fan Ann Wilson, of Heart, on this latest Led Zep book’s back cover. “This is a story of poetry and power, rape and pillage, of rock’n’roll incarnate,” she adds, failing immeasurably in the discreet reticence department.

The levee broke with the 1985 publication of Hammer Of The Gods by Stephen Davis, which to a great extent relied on the testimony of Richard Cole, the group’s buccaneering tour manager. Cole himself followed seven years later with the ghost-written Stairway To Heaven, which put him in the doghouse with the surviving members of the group, albeit temporarily. Betwixt and between came several more benign books, but the cat was set among the pigeons again in 2012 by Barney Hoskyns’ fascinating oral history Trampled Underfoot in which contributors, including this writer, didn’t hold back in the ‘infamy’ department. Since then we’ve had Chris Salewicz’s candid Jimmy Page biography and Mark Blake’s revealing but sincere Bring It On Home, a book about manager Peter Grant, neither of which held back on the juicy bits. Now, topping them all, we have this 674-page monster by the American writer Bob Spitz who lists over 50 interviewees, burrows down like a mole on small details and incidents, and leaves no stone unturned when it comes to those episodes in the Led Zeppelin story that Ann Wilson relishes so much.

Meanwhile, the surviving members of the group, especially Page and Jones, brush it all aside in much the same way as Randy Andy describes the activities of Jeffrey Epstein, implying without stating specifically that such talk is ‘unseemly’ when applied to gentlemen of their age and esteem. Plant, however, occasionally lets his guard down with a twinkle in his eye that suggests some unspecified misbehaviour may have occurred all those years ago. Nevertheless, the tug of war continues.

But back to the book. Those 50-odd interviewees Bob Spitz acknowledges don’t include myself but I should make it clear at this point that he recorded my thoughts on LZ during a most enjoyable lunch we had in Soho three years ago, and with my permission included some of the observations and stories that can be found under Led Zep on this blog. Furthermore, Bob showed me his manuscript earlier this year and as well as pointing out certain factual errors I suggested some clarification pertaining to UK rock history. I was not privy to the two 16-page photo sections where, to my distress, I found a few more errors in the pre-publication edition that arrived on my doormat earlier this week, most of them pertaining to dates, which I hope will be corrected in future printings. Similarly, he hasn’t adopted all my recommendations to improve the book, nor would I expect him to.

But this is small beer compared to the vast scope of his enterprise. Grandly subtitled The Biography, it more than lives up to its name, and not just because it’s longer, more detailed and more revealing than any of the other Zeppelin books on my shelves. Bob Spitz is a fine researcher, a knowledgeable, experienced music critic and an astute storyteller, which makes the book appear shorter than it is because you keep wanting to turn the page to find out what happens next, even though the story he’s retelling is hardly new. The story in question, of course, is a classic rise and fall, a novelist’s dream that just happens to be true, and no rock band – not even The Beatles, who took far longer – rose to such heights so quickly as Zep nor fell from grace so tragically, suddenly or in such discomfiting circumstances, and the fact that they have since been redeemed, musically at any rate, does not alter this.

The tale is told well. It lasts 11 years and 11 months, from August 12, 1968, the date posited for their first rehearsal in London, to July 7, 1980, when they played their last show in Berlin; 4,347 days of music and mayhem, reckless ambition, seat-of-the-pants evolution and Icarus-like collapse, an epic saga of highs and lows scarcely credible in today’s anaesthetised rock climate.

As you would expect, five of the 22 chapters up to this point detail the lives of Page, Plant, Jones, John Bonham and Grant prior to Led Zep, with more on Page than the others combined, though it’s pleasing to note that throughout the book Jones, their secret weapon, is afforded a bigger slice of the pie than in any other Zep book I’ve read. The 20-page final chapter offers a fairly brief resume of Zeppelin-related matters, including Bonham’s death, that follow that final gig, all the way up to the 2007 O2 Arena show honouring Atlantic Records’ boss Ahmet Ertegun. No space is given over to their solo careers, the assumption being that Spitz regards them as nickel and dime compared to what went before.

Furthermore, unless I’m mistaken, this is the first Led Zeppelin biography to include copious notes, 62 pages in all, detailing the sources of all the quotes in the book, be they from the author's own interviews or lifted from magazines and other LZ titles. In this regard, unlike the vast majority of books in the rock canon, the book vies for scholastic recognition.

It goes without saying that Messrs Page, Plant and Jones have not contributed. Still, many of those around them, roadies, employees of Grant, Atlantic and Swan Song, music industry pundits, friends old and new (male and female), photographers, journalists and assorted observers including the odd rock star, have offered their stories and opinions. As a result, Bob Spitz has produced a doorstopper. Finally, I should add that it contains many anecdotes with which I was unfamiliar, at least until I saw the manuscript earlier this year, but, taking a leaf out of their book, like Page, Plant and Jones, I shall maintain a discreet reticence, so you’ll need to buy it to discover them for yourself.

Not sure I want to know "everything" about my favorite band...

The vicarious male rock star can read this book and play air guitar with the latest reissue, and for a brief moment they transcend their lives.

After his Albert Goldman-esque Dylan biography (which doesn't even appear on the author's website) Mr. Spitz had a long way to redemption, and his Beatles tome is good, if a little biased. I will approach this carefully, and I hope I'll be pleasantly surprised.

Lucky to have worked the 1975+77 North American Tours as a Gofor for Showco . HIRED BECAUSED I was recommended by "Potsy" FOH enginner. Im curious to know if anyone from Showco Inc. Was interviewed ? $ensationalism Sells $$$$$$$ along with emotional sentiments & nostalgia !
Oh I have a few bizzare memories++++

That would be "discreet".

A second rate effort with hardly any new detail. Mick Wall's remains the best on Zep.