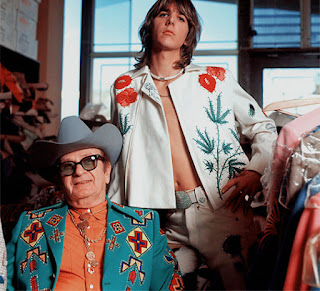 Gram Parsons in his Nudie suit, with Mr Nudie the tailor.

When I was posted to Los Angeles at the end of August in 1973 to become Melody Maker’s man in America I was relieved of my position as the paper’s News Editor. This was something of a relief as filling MM’s news columns every week was just about the most arduous job on the paper. Nevertheless, one of the first assignments to hit my in-tray in LA was a big news story that still echoes down the ages – the death of Gram Parsons and its macabre aftermath.

Gram died on September 18, just 23 days after I landed in California, and within hours his body was snatched by his friend Phil Kaufman and taken to Joshua Tree National Park where Kaufman cremated it in a car park. This, he explained later, was in accordance with Gram’s wishes, as expressed only weeks before, at the funeral of Clarence White, a fellow alumnus of The Byrds, who was killed when a drunken driver mowed him down outside a gig in Palmdale.

When I heard about Gram’s death I was living at the Chateau Marmont, where I spent my first month in LA. The Chateau was a faded gothic castle of slightly ill-repute with rooms that for years had housed a transient clientele of renegades from the film and music industries. Though I didn’t know it at the time, Gram Parsons was among them. He’d lived there on and off since 1969, and he was in residence in July, the month before I arrived on August 26, so I missed him by weeks. The rooms there were single bedroom apartments, with kitchens and big living rooms; Gram’s was 4F and mine was 3F, so he’d lived immediately above me. There are many photographs of Gram taken at the Chateau, in his room, in the public area on the ground floor and on the roof.

But if living at the Chateau was the nearest I got to Gram, the next was interviewing Mr Nudie*, the Hollywood tailor whose speciality was making elaborate suits for country & western stars, those rhinestone encrusted creations festooned with wagon wheels, pistols and cacti. The one he famously custom made for Gram, however, featured marijuana leaves and he can be seen wearing it on the front cover of The Gilded Palace Of Sin, the Flying Burritos Brothers’ 1969 LP. On the back of the jacket is a cross which reflects Gram’s southern upbringing and the religious-themed songs he brought to Sweetheart Of The Rodeo, the only Byrds’ album he played on, and which under his influence saw the group take a sidestep towards country music.

It’s because his death coincided so closely with my arrival in LA, and also because I love his music and the sound of his voice, that I’ve always been fascinated by Gram Parsons. It’s no secret that he came from a privileged background, from a family of wealthy Florida citrus growers, the Snivelys, from whom ample funds trickled down to him throughout his short life, but it wasn’t until I bought the UK rights to Hickory Wind, a biography by former Rolling Stone writer Ben Fong Torres, for Omnibus Press, that I gleaned some details of this. However, on a recent trip to America I picked up a used copy of a far more substantial biography, Twenty Thousand Roads: The Ballad of Gram Parsons and His Cosmic American Music by David Meyer, and from it I learned much more about his background. 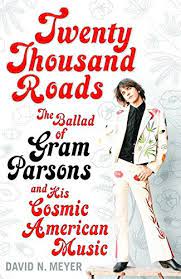 While this 560-page book suffers from some repetition and the author’s insufferable habit of including unnecessary potted biographies of every musician that Gram may or may not have admired, or met, or played with, it excels on Gram’s early life and dysfunctional family. Loaded they may have been but his dad, who married into the Snivelys, shot himself, his mother died aged 42 from alcohol poisoning, and his stepfather, from whom Gram took the name Parsons, ran off with the family nanny. The whole awful saga, from the domineering patriarch to the doomed but beautiful daughter, reads like something from a Tennessee Williams play, complete with those sports traditionally associated with the wealthy, like hunting, fishing and wife-swopping.

So, it’s easy to conclude that Gram was a poor little rich boy. Buoyed up by Snively family funds, he had no fear of failure and was able to glide through life like the successful rock star he never became. Among others, his money enabled him to befriend The Rolling Stones, always leery of leeches, which Gram wasn't, of course, and Keith Richards in particular, and he spent time at Nellcôte on the French Riviera during the recording of their masterpiece, Exile Of Main Street, which he probably influenced, albeit subliminally. He could also afford to pay Elvis’ band, among them the great guitarist James Burton, to back him on the two wonderful solo albums, GP and Grievous Angel, that he recorded towards the end of his life, on which his stellar musical legacy largely relies.

The impression given in Twenty Thousand Roads is that Gram didn’t really try hard enough and much preferred to get blitzed to working, especially on the road. He wasn't much of a guitar player but when he put his mind to it he could write songs of immense depth and sing them like an angel. On the other hand, he was a very bad boy indeed, as reckless as any rock star you care to name; addicted to heroin, pills and alcohol, serially promiscuous and he neglected his daughter Polly, who has also written a book, even though she barely knew her father. He was often disloyal to friends but had a disarmingly courteous manner, as befitting a Southern Gentleman of wealth and taste, that he could turn on like a tap, an especially useful skill when it came to charming the ladies. Also, he had a loose relationship with the truth and tended to compartmentalise various aspects of his complicated life, so those close to him knew only one piece of the puzzle.

That said, Gram had an encyclopaedic knowledge of country music, and a vision to update it so it would appeal to rock fans of his own generation, a mission in which he largely succeeded. His soulful voice expressed emotion like few others, especially when he sang alongside Emmylou Harris on those two late career solo LPs. For the record, there is no evidence beyond the depth of those recordings that he and Emmylou were romantically connected.

And the annoying thing is that Gram Parsons died 23 days after I arrived in LA so I was never able to interview him.

"The Gram Parsons Tribute Concert" has happened in Gainesville,Fla. for decades; largely I suspect due to the influence of Gainesville's Leadon brothers & surviving members of the Mudcrutch crowd. At one of these outdoor pavilion shows nigh 15yrs ago I sat on the grass next to my dear dear friend who'd reached her 60s in age then and was every bit loyal to her 1960s values & culture. The tears flowed from her eyes as my own children & hers now grown choogled & danced to Mike Bowlware singing a sweet Gram Parsons song.
I've known her since I was a teen & she then (and still remains unadmittedlly) The Matriarch of the legendary deep underground rural "Gainesville Green" guerilla ganja ardeners' tribal culture.
I said, "Darlin, you're really touched by this music." She turned to me teary-eyed through her prescription Joplin/Lennon round specs, yet grinnin hard, "Whhy Yheus Ah Ayhum TOUHCHT! I was 16yrs old and went to see Gram at a coffee house way south of here, loved his voice, met'm backstage, smoked My First Joint & Lost My Virginity all in One Night With Gram Parsons! So yes, you could say I've Been Touched A Long While!"
I reply, "Golly Ned, that's a deep & early appreciation of Gram Parsons!" She chuckles saying "It was early; The Beginning of many great things for both of us. Gave me my 1st marijuana & took my virginity! And I introduced him to a boy who had a 2-track recording machine..." Her communal farm would later host a Halloween Tradition called "The Freakers' Ball" after it was kicked off UF campus for flagrant nudity & sexual behaviours. Country Joe & The Fish, Deserata, The Allman Brothers Band, Joan Baez, Minnie Riperton, early "1%er Band" Skynyrd, etc. would play shows out on that magical mushrooms & herbals property.

The Matriarch said, "I'll just bet you ain't listened to that 'Sweetheart Of The Rodeo' LP that I gave you for yer birthday (same day as her "Old Man"'s bday; we share parties) years ago! Or you'd damnwell know these tunes & lyrics." (I hadn't, shrinkwrap still sealed. Dang!) That began my deeper appreciation of Gram's music.
My wife's grandmother, a 14th Generation Floridian grew up poor in the Winter Haven area. Her late husband also came up there cowboying his Daddy's herd in Eagle Lake. After I started enjoying Gram's LP I asked after the local lore on the Snivelys & Parsons. Both Grands had negative things to say about the Snivelys. Usually reticent old Luther, Jah Rest His Soul, said "Let's put it This A Way: their last name wuz raht approprit! Snively, Snidely; 'bout it. Old Parsons, he wuz a war heroe. But they ruint thet boy. He seemt a spun jitterbug the few tahms Ah seen'm efter his daddy kilt hisself; tender, but painful lost. The momma died not long efter."
Those same grandparents would help send my wife for a few years to Gram's private alma mater, The Bolles School, before class bullying & tuition drove her out. She commuted from Molasses Junction, but Gram boarded there. Someone in the Jax old hippy community has the windowframe Gram vandalised with raunchy carvings there.
Everyone pratters about the reefer leaves & tuinals on Gram Parsons' Nudie Suit... I find the poppy blossoms most striking. Oh The Deadly Bliss Sometimes Necessary To Dull These Florrid-duh Pains.

Thank you for this post. It distracted a Saturday brain to writing.

Thanks for that. CC