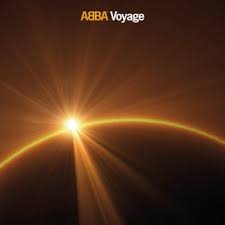 Long waits invariably heighten expectations, whether it’s the traditional late arrival on stage by The Rolling Stones or the delay between albums one and two from The Stone Roses. The Stones usually make up for their tardiness, at least by the end of the show, but the Roses’ second album was a bit of a disappointment, give or take a couple of tracks. Which brings me to Abba and the far longer wait, 39 years to be precise, between the release of ‘The Day Before You Came’, their last recording in 1982, and ‘I Still Have Faith In You’, the taster from Voyage, the new, much-heralded album that was released on November 5, accompanied by all the fireworks you would expect on Bonfire Night.

Early reviews were mixed and a bit sketchy, which leads me to believe they were written in haste, the fevered anticipation having triggered a rush to make up for lost time. Nevertheless, the sense of expectation surrounding Abba’s Voyage prompted a marketing campaign orchestrated with extreme finesse by Universal Music who no doubt instructed all their production plants to manufacture Abba CDs by the skip load. Only six weeks to Christmas too.

As well as manufacturing Voyage they probably knocked out another million or two of Gold, which has already sold umpteen million copies and stands as the jewel in Abba’s crown, one of the greatest of greatest hits albums, showcasing all Abba’s strengths, from the beloved ‘Dancing Queen’ to that Pacific Ocean of heartbreak, ‘The Winner Takes It All’. I’d hazard a bet that Gold’s universal charms have raised the bar so high that many fans, especially newer ones, will expect Voyage to boast similar virtues. Some probably saw no reason to reach deeper into Abba’s catalogue and, in this respect, those umpteen million sales might therefore be a poisoned chalice: is Voyage as good as Gold?

Well, it’s not, nor would any sane person expect it to be. Voyage is not an unqualified triumph yet at the same time it holds up well against any of the eight LPs Abba recorded between 1972 and 1981. Like all those albums, it’s a mixed bag, 10 tracks in all, not that generous in the CD age that Abba just preceded, a few superb songs, a few on the mediocre side and one stinker. It’s produced with all the care you would expect from experienced studio craftsmen like Benny Anderson and Björn Ulvaeus, and the heavenly choir of Agnetha Fältskog and Anni-Frid Lyngstad has lost none of its charm in the intervening years. Agnetha sounds the same, Frida a tad lower. Björn’s lyrics are sometimes slightly odd, as they always were, and there are hooks galore alongside three cheeky quotes from their past, though you have to listen carefully to catch them. Perhaps more importantly, Abba as a unit has done absolutely nothing in the way of updating their sound or style, with the result that Voyage could have been recorded at any time during their heyday. So, the Voyage might have lasted a long time but it didn't go very far.

The album opens with ‘I Still Have Faith In You’, the lovely ballad that was released in early September as a taster. Frida leads a song that is gloriously melodic, chiming and poignant insofar as the lyrics seem to relate to the group itself, the ‘memories we share’, and when Agnetha joins in, there’s that unmistakable Abba sound, the lush choral wash that only they can produce. Lasting just over five minutes, it gathers momentum, soaring into a blend of overdubbed verse and chorus that ultimately drops away to leave Frida alone to bring it back to where it began. It’s up there with the best of Abba.

There’s an abrupt change of mood for ‘When You Danced With Me’, its Gaelic flavour contrasting sharply with Abba’s regular arsenal of snappy pop, disco workouts and woeful, melancholic balladry. Still, it’s lively and fun, with a trace of synthesised bagpipes, even if the girls are lamenting the loss of a childhood sweetheart.

So far so good but track three, ‘Little Things’, is the kind of thing for which the fast forward facility was invented, at least on my device. It’s a Christmas song, twee in the extreme, and for the final verse Frida is joined by a children’s choir, as in ‘I Have A Dream’, except even more excruciatingly saccharine. Furthermore, in among the doses of syrup, there’s a mild suggestion that on Christmas morning mum and dad indulge in a bit of festive rumpy-pumpy before the kids open their presents. I just hope they don’t release it as a single on the feint chance it'll become this year’s Christmas number one.

It’s something a relief to reach ‘Don’t Shut Me Down’, which may have been sequenced here for its opening line, ‘A while ago I heard the sound of children’s laughter’. The second of the two songs previewed prior to the album’s release, and the first track here to feature Agnetha singing lead, it’s catchy, cheery and danceable, even though the poor girl’s fragile heart has been broken yet again. Nowadays, though, she can cope – ‘I’m not the one you knew’ – for which we can all be thankful. This is pop Abba in the manner of ‘Knowing Me, Knowing You’, ‘Mamma Mia’ and ‘Take A Chance On Me’, complete with Benny’s tinkly piano and a ‘Dancing Queen’-style sliding glissando across the keys, a snappy snare and Björn, quirky as ever, rhyming ‘frustration’ with ‘transformation’. It makes up for ‘Little Things’, faint praise I know but the more I hear it the more I warm to it.

‘Just A Notion’, which follows, opens with a slice of boogie piano a la Mac Rebennack, but soon settles into a shuffle with hints of German shlager, one of Abba’s early default positions but, to be fair, this song would have won Eurovision hands down at any time in the last 30 years. It’s as catchy as they come, with Benny tinkling away like Steve Naïve on ‘Oliver’s Army’, and in the background, especially towards the end, the girls murmur ‘A-ha-ha’, a bit further down in the mix to the similar vocal trick on ‘Angeleyes’, the first of the three nostalgic quotes I refer to above. It’s no surprise that this has become the third track to have been released as a single. (Since writing this I have learned that ‘Just A Notion’ was recorded in 1978 but held back. This would suggest that the girls’ ‘A-ha-ha’ was a vocal idea hatched before ‘Angeleyes’ was recorded and not after.)

No Abba album would be complete without a dramatic ballad sung by Agnetha and on Voyage we have ‘I Can Be That Woman’, another meditation on a failing relationship, more in the style of the show tunes that were Frida’s forte in the past. Oddly, the surprise here is that her husband seems to prefer the company of the family dog to herself, a dilemma that only a quirky lyricist like Björn could have devised. In a similar vein is ‘Keep An Eye On Dan’, again sung by Agnetha who this time appears to regret separating from her man, more rhythmic that the preceding track with a sparkling chorus, and as the song fades Benny injects the keyboard figure that opens ‘S.O.S.’, a nice touch.

‘Bumblebee’, a richly melodic but rather vague comment on climate change, opens with a few bars on recorder that bring to mind the opening bars of ‘Fernando’, no doubt deliberately. Frida intones about the glories of her garden, mentioning a few flowers by name and mourning the day when the bees will no longer visit. It’s quite charming if slightly clumsy in the lyric department.

The penultimate track, ‘No Doubt About It’, opens with a sprightly banjo and is an absolute cracker in Abba’s pop style, fast and catchy, up there with the best from their past. Although there are neat variations, the recurrent melody and tempo reminded me slightly of ‘Scorpio Rising’, the 10,000 Maniacs song from The Wishing Chair, but is no worse for that. I like the way the backing drops away for Frida to take a melodic line or two before both girls jump in on the breezy, full-tilt chorus. Another dose of Abba at their best.

Finally, we have the grand, stately closer, ‘Ode To Freedom’, which I read somewhere is based on a waltz from Tchaikovsky’s Swan Lake. The only bit of Swan Lake that I know is the memorable ascending phrase I played years ago in a band myself, an instrumental that The Cougars had mutated into ‘Saturday Night At The Duck Pond’, but Abba’s take on the eminent Russian composer’s work is far more reverent, and accompanies a beautifully sung hymn, slightly let down by unconvincing lyrics. Still, the choral panorama is pure and, I’m sure, heartfelt, and it brings the album to a suitably memorable close.

As good as Gold? Not quite but at least four tracks would have made it on to that CD, and most of the rest on to More Gold.

An excellent review Chris, the best that I have seen so far. Well done

A nice review Chris but please re-read the lyrics to Ode to Freedom. It’s a philosophical poem on the meaning of freedom and a call for the unity of mankind, no less. Absolutely stunning and yes..profound! Little Things is a magical, nostalgic, romantic, idealised Christmas morning ..in sound. ABBA challenge us to embrace our inner child. If you resist, you lose out!

Well I was thinking of buying it, now I definitely will - if only to see if I concur with you on 'Little Things' and to correctly identify what they pinched from Pete! Nice one CC.

Wonderful prose and spot-on analysis, Chris. I smiled about your clever observation that 'children's laughter' follows the "Little Things" chorus — lost on me til I read that. I, too, particularly love the first two pre-album-release singles, and also equally enthralled as you about "No Doubt About It."

Funny, I at first thought Frida's voice is relatively the same but Agnetha's is a step lower. When I first heard "Don't Shut Me Down" I thought I was listening to lead vocals by Frida — til I was later sternly corrected, the result of perhaps my own ignorance.

I laughed out loud when you made reference to Björn's sometimes 'quirky' lyrical creations (yes!) and, to me, his ultimate contribution of that to this album: DSMD's "Now and then combined." That is one for the history books.

Most of the time I was nodding my head in agreement to your praises and criticisms, Chris — thank you for a most thoroughly enjoyable read.