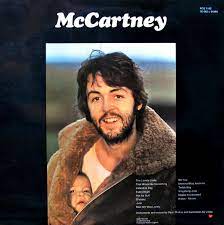 Turning 80 and performing a Glastonbury set lasting almost three hours invites comment, so I have decided to share a story about Paul McCartney that until now I have reserved for private conversations. It is not about music or song writing, or The Beatles or bass guitars shaped like violins. It’s not even about vegetarianism or the vast wealth that Paul has accumulated, or being knighted or any of the other topics that regularly crop up in interviews with the UK’s pre-eminent rock personality. It is about being a responsible parent and passing on the right values to your kids.

In 1988 Mary McCartney, Paul’s first daughter with Linda, came to work at my employers Music Sales, initially in our music publishing department, the idea being that she would learn about this aspect of the music business so that, one day, she would know how to administer the rights to her father’s songs and those he acquired, like those written by Buddy Holly and Carl Perkins. In the event, however, Mary found this dull and when a vacancy arose for a photo researcher at Omnibus Press, a branch of the company that was my domain, she opted for the role, not least because her mother was a noted photographer.

Mary was the baby cradled in Paul’s embrace on the cover of his first solo LP, and last night on the Pyramid stage the cover shot appeared behind Paul as he sang ‘Maybe I’m Amazed’, the album’s highlight. Back in 1988, that baby was a personable young woman of 20, very sensible, bright, attractive and charming, with jet black hair and the look of her father about her. The job of photo researcher required her to obtain pictures – prints or transparencies, this was pre-digital – for use in songbooks and biographies of rock stars published by Omnibus. She knew next to nothing about how to do this so I took her under my wing and introduced her to the various photo agencies with whom we did business, and also some individual photographers.

Mary took to this work like a duck to water, and because she shared an office with me we became quite friendly. Utterly unspoilt by the circumstances in which she was raised, Mary endeared herself to everyone in the office and she talked about her mum and dad quite openly, without an iota of self-consciousness, as if Paul and Linda McCartney were no different from any other mum and dad, simply her mum and dad which, of course, they were, to her anyway.

About two months after Mary began working for me in this capacity she mentioned that she’d told her dad who her “boss” was and that he remembered me from my days on Melody Maker when I met him a few times and even interviewed him in Studio 2 at Abbey Road. She said he’d like to meet me again and suggested that I accompany her to the recording of a televised interview with her mum and dad for the Terry Wogan Show that was scheduled in a week’s time at the Shepherds Bush Empire, then used by the BBC for recording shows.

So off we went, in one of Paul’s blue Mercedes Benz cars, driven by a sturdy looking chauffeur, myself and Mary, and also Stella and James, her younger sister and brother. I took my reserved seat alongside them in the balcony of the theatre and watched a video for ‘Figure Of Eight’, Paul’s latest single, and then watched as he and Linda were interviewed by Wogan. When it was over I accompanied Mary and her siblings backstage and in a crowded dressing room encountered a smiling Paul who after greeting me with a handshake ushered me aside, into a corner of the room where we would not be overheard.

“That’s right. Nice to see you again Paul. Funny how this has ended up, isn’t it?”

“Yes. She’s making a great photo researcher. Must be because of her mum being a photographer.”

“Is she really doing OK?”

“You’re not just saying that because I’m her dad, are you?”

Paul didn’t seem convinced. So, he took another tack. “Is there anything she does that’s bad?”

“OK. There is one thing that that she does that kinda annoys me.”

“Well, she spends a lot of time on the phone.”

“Just like her mother then. Linda is always on the phone. Does Linda call her at work?”

“Oh dear, I’ll have to put a stop to that. Nice to see you again. Bye Chris.”

And with that Paul turned away into the mass of people crowded into the room, and I said good night to Mary and left, not thinking any more about it.

It was about two weeks later when the phone rang on Mary’s desk. She wasn’t around so I answered it. It was Linda.

“Oh, is that Chris?” said the voice on the other end. “It’s Linda, Mary’s mum. I’m so sorry for calling her at work. Paul told me I shouldn’t but I just want to know whether she’s coming to down to Peasmarsh this weekend or staying in London. Look, I’m really, really sorry to bother you like this but can you get her to call me back. I promise I won’t keep her on the phone and please don’t tell Paul I called if you happen to speak to him. He said it wasn’t right to call her at work and he was right about that. Mary is there to work not to chat with me. I’m so sorry again Chris.”

For years now, I have imagined that conversation over the breakfast table at one of the McCartney residences. Paul McCartney, of all people, telling his wife not to call their daughter at work because I didn’t like it. I’ve seen Mary a handful of times over the years since she left our company, and we always smile about it.

A great start to my Sunday morning. Thank you for sharing, Chris.

I agree with everything you've made public here. Because of our 'deal' with Bob Wise I believe LFI was a first port of call for images for any projected publication. After the 'awe' of her presence in our office faded away she made it clear that she was there to do a job and nothing else. Nice Lady - enjoyed here being there and saying 'give my regards to your Dad', when she left, always generated a grin (I often wonder if she ever did!)

I've shot over 400 videos now. And Paul is one of only a handful of artists I've worked with who took the time to ring me afterwards and say thankyou.

I am so excited about this post!
In March 1988, I was in London. By way of some back & forth correspondence, dealing with an out of print Genesis book for me, a unattainable Bowie book for you, I contacted you when I got settled. We met up at the Forum for a drink, you shared some great WHO stories. AND you shared that MARY MC CARTNEY had just started working in your office & that she may have answered the phone when I called. My heart soared! You told me how grounded she was, & how her dad instilled good values in her. I just love that you shared this story! And love what a great dad MACCA is & what a fine job he & Linda did!!
DEB BRADBURY
PHILA, PA

That's a real gem, Chris, thanks for sharing, particularly in light of McCartney's 80th birthday. I have never heard of any of his kids being lazy or acting like spoiled jerks and I think you need both parents running on all cylinders to make that happen. I wonder if that is a common trait among the musicians born in the shadow of World War II, growing up in the era of restrictions, so on. I believe I heard this time once referred to as "the time of hard work and straight ties, of polite, grateful suffering." Surely, the post-war hardships and relief from defeat built character. Anyway, I can't recall any eye-rolling, cringe-inducing stories about the kids of any of the major British musicians that I follow.

Fantastic story. Thanks for sharing