ELVIS - IN THE NEWS 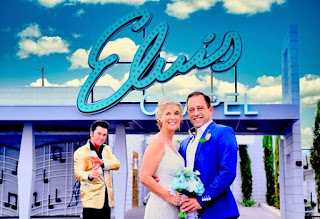 Elvis is in the news this week, which might mean sales of Caught In A Trap, my book about his kidnapping in 1975, finally reach three figures.

Firstly, there is a new biopic about him out which stars Austin Butler as Elvis and Tom Hanks as Col Tom Parker, which I will go and see when it opens in Guildford later his month; and secondly, reports have surfaced that those who control his estate are clamping down on Elvis-styled weddings in Las Vegas, which is the thin end of the wedge for romantically inclined couples eager to tie the knot to the strains of ‘Love Me Tender’.

The Authentic Brands Group, which control Elvis’ name and image, among others, has sent cease-and-desist letters to several Vegas chapels that offer Elvis-themed ceremonies, the inference being that if they don’t comply they’ll feel the weight of ABG’s high powered lawyers and very deep pockets, a chilling prospect indeed.

In their letter, AGB state that while they have no intention of shutting down the Elvis chapels they are, “seeking to partner with each of these small businesses to ensure that their use of Elvis’ name, image and likeness are officially licensed and authorized by the estate, so they can continue their operations.”

In other words, they want a slice of the action. This is a bit rich, especially as a glance at the internet reveals there seems to be more Elvis-style wedding venues in Vegas than actual religious settings, and what’s more they’ve been in business for years. So why now?

Leaving The Building: The Lucrative Afterlife of Music Estates by Eamonn Forde, the bible of death branding, gives details of earnings by musical estates from the years 2001 to 2020. In seven of those years Elvis tops the charts, comes second eight times and is never out of the top five, with total earnings during this period of $894 million. But they evidently don’t feel this is enough.

Now I’m not planning to remarry in a Vegas Elvis chapel or anywhere else for that matter, but if these places do yield to AGB and cough up whatever fees can be negotiated, it’ll no doubt be passed on to the bride and groom, making weddings that bit more expensive due to the premium ABG will collect.

Furthermore, AGB’s letter states that they are seeking to shut down unauthorised use of “Presley’s name, likeness, voice image, and other elements of Elvis Presley’s persona in advertisements, merchandise and otherwise,” the inference being that AGB control all this.

So maybe I ought to have been worried by writing Caught In A Trap. As it happened, the book included snatches of lyrics from six songs associated with Elvis (‘Love Me Tender’, ‘Blue Suede Shoes’, ‘Suspicious Minds’, ‘One Night’, ‘Always On My Mind’ and ‘Peace In The Valley’) and in 2016, when I’d finished writing it, I played by the rules and wrote to the publishers of these songs seeking permission to use the lyrics. Only one, ‘Love Me Tender’, was controlled by the Elvis estate but they didn’t even bother to reply to my letter. The rest, barring ‘Peace In The Valley’ which was out of copyright, asked for small sums – £25 I think – to clear their use.

I have read that the new film has been ‘authorised’ by AGB but this does not augur well for it in my opinion. I really hope it isn’t a whitewash but I fear the worst.

Finally, since shamelessness is no stranger to the world of Elvis these days, here’s a plug for my book: https://www.amazon.co.uk/Caught-Trap-Kidnapping-Chris-Charlesworth 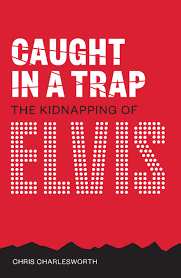 Email ThisBlogThis!Share to TwitterShare to FacebookShare to Pinterest
Labels: Caught In A Trap, Elvis

I was in Italy on holiday when Elvis fell off his Perch. LFI had a very small selection of images on file due to the fact that photographers, in general, were barred from shooting at performances - especially in Vegas.

Nevertheless a 'Team' of blue chinned, Ray-Banned 'gentlemen' arrived, unannounced, 2-3 after his death and demanded that we 'hand over' all the images we had on file or face the wrath of their attorneys. A quick call to Michael Rubinstein - our Solicitor at the time, resolved the problem - we should ask them to leave and, if they didn't, we should call the fuzz. Michael cited 'demanding goods with menaces'.

Duran Duran tried the same trick an few years later but offered reasonable cash for the files and, I presume, like most other agencies, we simply copied everything worth copying, handed over the copies, trousered the bread and carried on as before - we omitted to mention (They never asked!!) that literally thousands of images had been sent out to sub-agents and publications in the UK and world-wide. When the use of a purchased image was queried we simply stated that they were sent out before the 'deal' was done and, also, that they had only 'bought' the physical images - not the 'RIGHTS'.

Used to worry about this a little but, having just read 'Expensive Habits' by Simon Garfield I realise that LFI's minor transgressions didn't even scratch the surface compared to some of the so called managers.

I don't know where the e-mail below came from but it ain't mine - jmhalsall@hotmail.co.uk

Thanks John. I had more than my fair share of lawyers of making dubious claims on behalf of their clients who were the subject of Omnibus Press books. Some seemed to think that merely by publishing an 'unauthorised' book we were infringing their rights, which implies that in their view all biographical books about persons living or dead should be authorised by someone or other, ie flattering, including - to take it to extremes - Hitler!