ABBA AT 50 by Carl Magnus Palm 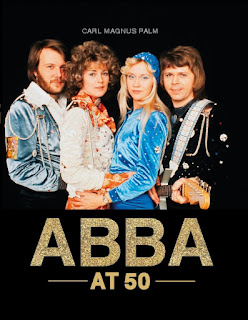 Illustrated Abba books have never been in short supply. Publishers long ago assumed that what their fans wanted was a large format book with plenty of photographs, preferably of Agnetha and Frida in clingy costumes that showed off their figures, and a minimum of text that skipped through their glorious career without much detail and certainly nothing negative. Slap it all together and you might have a decent seller on your hands, especially if publication happens to coincide with an anniversary or anything else that raises the Swedish group’s profile for a few months.

Magnus Palm – he loses the Carl among friends – acknowledges this in a reference to the paucity of serious Abba books in the introduction to Bright Lights Dark Shadows, his definitive, text-led, 250,000+ word biography of Abba first published in 2001 and since fully revised. You could be forgiven, therefore, for assuming that Abba At 50 is a frothy confection just like all the rest. Indeed, it’s not even the only picture book published to celebrate their 50th anniversary, as a glimpse at Amazon’s Abba page reveals another called 50 Years of Abba: The Unofficial Illustrated Book For The Anniversary, and about half a dozen older books whose publishers no doubt hope will get a bounce this autumn.

In stark terms, Abba At 50 is a summary of the 2014 edition of Bright Lights Dark Shadows, drastically but skilfully reduced to 13 concise chapters, with a new overview as an introduction and a 14th chapter, newly written to cover Abba’s 2021 Voyage album and the concurrent Abba avatars show, ongoing in its own arena at the Queen Elizabeth Olympic Park at Stratford in East London. The book’s 240 pages contain 168 photographs, mostly in colour, and a running LP discography, with track listings, personnel and incidental notes, that separates each chapter once Björn, Benny, Frida and Agnetha are up and running.

Magnus, of course, is now recognised as the world’s leading Abba historian, as Mark Lewisohn is to The Beatles and Dave Lewis to Led Zeppelin. His book isn’t authorised – it doesn’t have Abba’s official logo, with the first B inverted, on its cover – and he doesn’t thank the four members of the group in the brief acknowledgements at the back, aside from noting that Benny Andersson helped him write a book about the Hep Stars, Benny’s first group. He also notes, dryly, that he has ‘somehow ended up being my main source of information’.

He’s not exaggerating. By my reckoning, Abba At 50 is Magnus’ seventh Abba book with an eighth a work in progress* but what differentiates it from all the other illustrated Abba books on the market is the precise attention to detail and the certain knowledge that every scintilla of information he offers is 100% accurate. Almost all the photographs are captioned precisely, time, place and circumstance duly noted, which is more than can be said about most illustrated books on pop bands, but no less than I would expect from their most erudite and diligent biographer.

Similarly, while there can be no question that Magnus is on Abba’s side – he’s long been the group’s go-to man for sleeve notes on reissues – he is far from slavishly sycophantic. He covers the ups and the downs, the fall outs and periods when Abba’s star wasn’t shining quite as brightly as it does today. The inclusion of three damning review quotes from early in their career at the start of Chapter 2 epitomises his impartial approach, even if the foursome nowadays ruefully admit they weren’t far from the truth. The divorces, fall out with manager Stikkan ‘Stig’ Anderson and overindulgence in alcohol – Björn and Benny have both been obliged to become teetotal – aren’t glossed over either.

With a £30 cover price (£24.17 on Amazon) Abba At 50 is not the cheapest illustrated Abba book on the market. However, although I haven’t read them all, I’ll put good money on it being the best.