To the D'Stassi Art Gallery in Hoxton to see my old pal Bob Gruen who has generously agreed that his pictures share wall space with a selection by Leee Black Childers, another old photographer pal of mine who sadly died in 2014. That’s not a typo: Leee really did spell his name with three e’s, though I think he was christened with two. 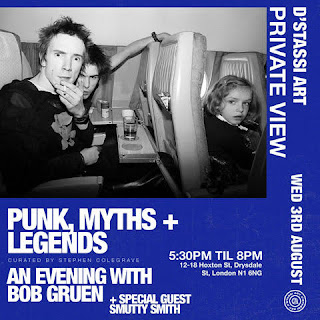 Leee was as camp as a Butlins holiday, a flamboyant gay man who died his hair blonde and didn’t need to came out because he was never in. He was drawn to Andy Warhol’s Factory crowd and the drag queens who assembled there, and he photographed them all. This led him to become involved with Warhol’s Pork, a sexually provocative play staged at London’s Roundhouse that enticed David Bowie. Before anyone knew it Leee found himself employed as a photographer-cum-tour manager at Mainman, the company formed by Tony DeFries to manage Bowie, where he was in his element. 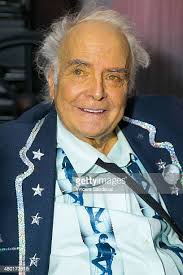 Iggy and Mott The Hoople inevitably entered his orbit but, like everyone else among the colourful crew that manned Mainman, Leee was jettisoned when David realised how much this was all costing. Next, Leee found a natural habitat amongst the punk and new wave bands that followed, not least Jayne County, whom he managed, pre-Blondie Debbie Harry and the Sex Pistols. In mid-stream he befriended the Dolls, and many pictures of these acts, taken by Leee, can be found at D’Stassi.

As for Bob, a handful of his pictures – probably 0.0001% in reality – have been enlarged to what he described in an email to me as versions of “images I've printed on large scale canvas”. He’s not kidding, they’re huge and there’s three of them: John Lennon in his New York shirt (perhaps Bob’s best known – daughter Olivia sent me a PC from NY with this image not so long ago), Led Zeppelin (by their plane) and The Clash (live, looking like they mean business), all classic photos but they’re on the pricey side so you’ll need to start saving now if you want them to hang on your wall by Christmas. 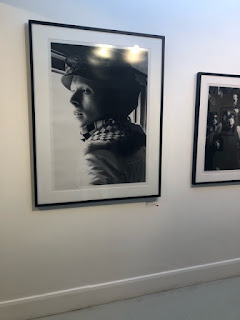 One of Leee’s is pretty big too, a shot of Bowie, seen above, but I was more impressed by a series of Elvis, taken during his New York Press conference on June 9, 1972. This was a year and a bit before I became Melody Maker’s man in NY, but my colleague Roy Hollingworth was there to report on it. I was in London, green with envy. Here’s my favourite shot of Elvis by Leee. 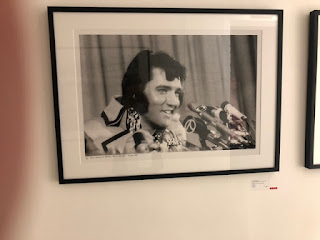 Last night Bob was on hand to sign copies of the catalogue and his own book Right Place Right Time, published last year, in which I make a cameo appearance. “I went to see The Stilettos, the band Debbie Harry was in before Blondie, with Chris Charlesworth, NY correspondent for the British weekly music magazine Melody Maker,” writes Bob. “Television as also on the bill that night, which means Chris was one of the first journalists to catch the new scene that was happening in New York City.”

I remember that night as if it was yesterday, but I’m a bit confused. We first saw Debbie in The Stilettos at the 82 Club in April, 1974, and she was a platinum blonde, her hair bouncy and covering her ears, but at this exhibition there’s a pic by Leee, dated that same year, that shows her with short dark hair. See below. 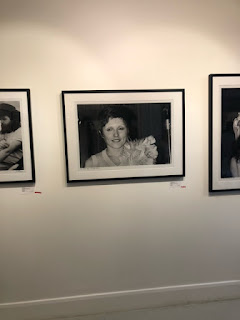 Maybe it was taken earlier in 1974, before blondeness became Debbie’s destiny. Next time I see Bob I’ll ask him about that. The exhibition ends on August 19.