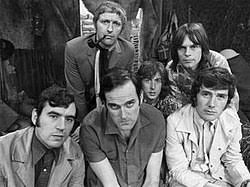 The other night I watched part of the TV documentary Monty Python: Almost The Truth (Lawyers Cut) that deals with their first two films. It reminded me of how before they became household names the Pythons were to a large extent allied to the rock industry, universally loved within it and reliant upon it to progress.
In December 1970 I reviewed their first album for Melody Maker, the only (intentional) comedy album I ever reviewed. Released on BBC Records, Python had been going for just over a year by this time and were strictly a cult act. Here’s a bit of what I wrote: “Of all recent comic programmes to arrive on the magic box, Monty Python's Flying Circus seems to be the one that most people talk about afterwards. It's become a cult, as a glance at the MM club adverts will show. On Tuesdays groups switch off at ten for half an hour for the patrons to soak up another batch of absolute lunacy from John Cleese and friends. It's all here on the record... dead parrots, albatrosses on sticks, flying sheep, Mr Hitler, dog kennels that mean mattresses and many more of the surreal sketches that result in the director tearing up his script and saying things are getting too silly…. It IS something completely different, hilariously funny and an invaluable souvenir of one of the funniest shows ever broadcast under the BBC banner.”
The following year they released a film of sketches seen in the first two series of the BBC 2 TV show, remade without an audience, but it somehow lacked the spontaneity of the television series. It was intended for American audiences and, of course, not many Americans ‘got it’ at first. Inevitably those that did, as in England, were enlightened music lovers.
Nancy Lewis, once The Who’s US PR, was on the documentary talking about her role in boosting the Python’s US profile, as were others from the US (and UK) music industry. Both Led Zeppelin and Pink Floyd ‘invested’ in Python and they were signed to Charisma Records (home of Genesis, the Nice and Lindisfarne) by another supporter, Charisma boss Tony Stratton-Smith. I remember that one of their Charisma LPs had ‘three sides’; only two really but on one of them what you heard depended on where the needle dropped at the beginning – you could own it for weeks and only hear some of the sketches. In this way I missed the cheese shop sketch for weeks, and the bouzouki player who wouldn’t shut up while Cleese ordered the Camembert that was so runny it ran right out of the shop.
Most famously, of course, George Harrison came to their rescue to bankroll Monty Python’s Life Of Brian, which as Eric Idle was fond of saying, was “the most anyone has ever paid for a cinema ticket.” After EMI Films pulled out for fear of offending the religious establishment (probably the most-easily offended of bodies anywhere, ever) Harrison put his Henley mansion Friar Park on the table to raise a $4 million investment in a movie that was the fourth highest grossing film in Britain that year and whose total US gross in 1979 was $19,398,164.
George also took delight in appearing in All You Need Is Cash, the 1978 Python spin-off mock-documentary featuring The Rutles, a parody of The Beatles co-directed and co-written by Eric Idle. Earlier, in 1976, George appeared in the Python stage show in New York during its Broadway run, joining the Mountie chorus to sing ‘The Lumberjack Song’. Michael Palin, Eric Idle and Co returned the compliment by performing the same Python sketch at George’s memorial concert at the Albert Hall in 2002.
I was at the show in New York and at the post-concert party had my first and only close encounter with a Python. It was John Cleese himself, introduced to me by Nancy Lewis, then the PR for Buddha Records which distributed Charisma Records in the US. I’d gone along with a married friend of mine, name of Kathy, also a fan, and I asked Nancy to introduce us.
“How do you do Mr Cleese, sir,” I said, shaking his hand. “I’m a big fan. This is my friend Kathy.”
Kathy extended her hand which Cleese shook and continued to hold for rather longer than might be expected. “Hello Kathy,” he said, peering down at her from his great height and completely ignoring me. “Have you known Chris long?”
“About a year,” she said.
“I see you wear a wedding ring. Are you married to Chris?”
“No.”
“I see. I understand. Does your husband know you’re out with him?”
“Yes,” said Kathy, wondering no doubt where this conversation was going.
Cleese finally let go of Kathy’s hand and turned his attention to me. “Mind you get this woman home without any hanky-panky,” he said sternly. “There’s far too much of this sort of thing going on today. Ought to be a law against it.”
And with that he turned and walked purposefully away.
We’d been Pythoned. Always something I recall with pride.

It was a joy to make 'Almost The Truth (The Lawyers Cut)' back in 2008/9 - We were given a great deal of freedom by the Python's and in getting that discovered that Elvis had been a huge fan! Something Eric was particularly taken with (him being the best music fan of the team). When I told John on his second day of interviews, Cleese who I think I can safely say doesn't own a single rock/pop album, looked me in the eye and said; "Interesting, doesn't mean much though does it!"