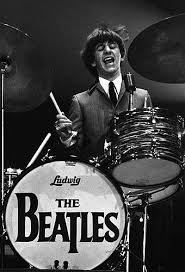 (I am grateful to Music Sales senior editor Tom Farncombe for help with this.)


Revolution In The Head by Ian MacDonald (Vintage, 2008)
Posted by Chris Charlesworth

We lived amongst Beatles, being neighbours of George's brother and father at various times. My Auntie Lil was best friends with Mona Best. But at some time probably around 1965 my dad was putting on a concert at the primary school where he taught, and - a good piano player - he had a little band made up from staff members. One teacher was a student on teaching practice. His drum kit was a very posh one, and I was allowed to sit behind it and play it. My dad said "that drum kit used to be in The Beatles! and ******* ******** used to play with them." I have no idea what the guy's name is, and my dad is long gone, so I will never know

Phil Collins: "Starr is vastly underrated. The drum fills on the song "A Day in the Life" are very complex things. You could take a great drummer today and say, 'I want it like that.' He wouldn't know what to do."