Phew, it’s mighty hot in Southern England right. Time for some summer music but not the obvious…


Among the vinyl albums I couldn’t let go of when I had the big clear out eight years ago on moving out of London was my Jan & Dean Anthology in Liberty’s Legendary Masters Series. It’s a two-album set with liner notes by Dean Torrence and while it would be stretching things to say that all the music on both discs is top quality there’s sufficient decent material for me to have later acquired a J&D CD and put the vinyl on the ‘not to be discarded’ shelf. Another reason was the fact that the sleeve also contained a sort of table of J&D information that included a year-by-year run down of the makes of cars they drove and also – surely a unique feature – the names of their girlfriends at the time each of their singles was released, some of whom appear in both the J and D columns at the same time. Those California girls…
Contemporaries of the early Beach Boys upon whom they relied for much of their material, I was always fascinated by J&D and when I got to LA in 1973 set up an interview with Dean who after the duo disbanded returned to his original profession, graphic design. The reason for the disbandment was Jan Berry’s horrific car crash in 1966 from which he never really recovered. He died in 2004.
I think some of this fascination stemmed from the fact that my life in wet and windy rural north Yorkshire was about as far removed as could be imagined from J&D’s upbringing in balmy southern California. I was always a sucker for surf music, that warmth of the sun feeling it evokes, and being as how the UK is going through this heat wave right now, I’ve dusted off a J&D appreciation I wrote for MM while I was in California towards the end of 1973. I got most of my information from Dean and the Anthology sleeve notes as there was no Wikipedia in those days, no rock encyclopaedias, just me and my notebook nosing around and asking questions. 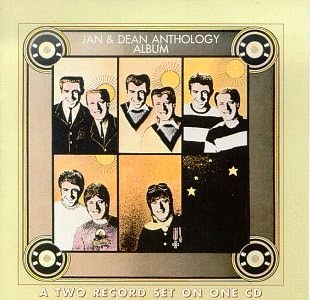 I was cruising in my Stingray late one night
When an XKE pulled up on the right
He pulled down the window of his shiny new Jag
And challenged me then and there to a drag
I’ll go you one better if you got the nerve
Let’s race all the way to Dead Man’s Curve.

And the chorus:
Dead Man’s Curve is no place to play
Dead Man’s Curve, you must Keep away
Dead Man’s Curve ...
You won’t come back... from Dead Man’s Curve.
Screaching tyres climax the song and the singer appears to have learned his lesson once and for all.
In real life it didn’t happen like that. Six weeks after J&D released their version of the ‘Batman’ theme, the crash came. Dean recorded a few on his own but packed it in after a year, preferring to study art and design. Jan has been undergoing treatment ever since.
Today Dean Torrence runs a studio in Hollywood where he designs posters, album sleeves and anything else that needs an artists’ touch. His business is flourishing.
Jan, always the leader of the pair, has made various attempts at recording again at A&M but nothing has yet come of it. He is fiercely determined to return sooner or later, with or without assistance from Dean. The least that can be said is that he is steadily improving.
Posted by Chris Charlesworth


Thank you for sharing such great information.
i can recommend Dr Obodo if you help finding out more detail about spell caster to get marriage ,stop divorce, finding new love and even need herbal to cure illness etc . contact info
E-mail ; templeofanswer@hotmail.co.uk
Phone/whatsapp ; + 2348155425481