This is an extract from Hey Ho Let’s Go, Everett True's biography of The Ramones, about Tommy who died on Friday. I would have posted it on Saturday but did not have access to the book as a digital document. The photo was taken by Bob Gruen. 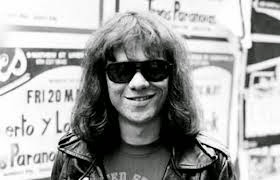 “TOMMY RECOGNISED SOMETHING in the other Ramones they definitely didn’t recognise in themselves. That was his genius – they had the heart and the idea, but not the cohesion. Tommy was able to unite the others over his backbeat, which you’d think anybody could’ve done… but then you’d think anybody could be Ringo Starr. It’s not possible because most drummers can’t sit still long enough to play a simple beat.”
Yeah, well it’s the old joke about how do you tell when the drummer’s knocking on your door? He speeds up at the third knock.
“Tommy plays at the same speed, the same beat, the same patterns all the way through. Most drummers are genetically incapable of doing that. He knew that simplicity was king. Simplicity was…”
Yeah, he’s fascinating. I spoke to him the other day on the phone – he’s so unassuming.
“They all are. I would sit and interview Joey and, considering his height and the way he was recognisable everywhere he went, he did not carry that overbearing aura about him, you know? He had a quiet, shy nature that suited the celebrity he had. The Ramones were the normal guys everybody loved to love.”
(Author’s interview with David Fricke, Rolling Stone writer/editor, 2002)

TOMMY RAMONE WAS born Tommy Erdelyi on in Budapest, Hungary.
The future drummer came to the US with his family in 1956: “I was six or seven when it happened,” he told me. “It was a very restrictive regime, you didn’t hear too much Western music. I remember the early stages of rock’n’roll, how much it excited me – even as a young kid I was into dressing cool, into wearing a certain type of shoes. It was nice there, except for the political regime. One of the first records I had was a score to a Hungarian movie, with a rock beat to it, making fun of America. I’d go to playgrounds in the city, but I also used to spend some time in the country – I have some rural memories of rolling hills and stacks of hay, dug wells with stone casings, very pastoral. I had a regular childhood.”
At school, Tommy was into The Beatles, playing his guitar and listening to music – a good guy, but quiet.
After he graduated in 1967, Tommy became a recording engineer at Manhattan’s Record Plant, where he worked with Hendrix on his Band Of Gypsies sessions, Leslie West (pre-Mountain), and on John McLaughlin’s Devotion album.
“You won’t find my name on any albums,” he told NME in 1978. “The only group that gave me credit was 30 Days Out. I was very young and working with Hendrix was a thrilling experience. He’d come back in the studio and play back the stuff, and say ‘Oh, that’s awful’ and I’d thought it was great. He’d put down a guitar track and say he wanted to do it over. And he’d do it over and over and over…”
Tommy then took a job at a film company near the Museum of Modern Art and would take long lunch breaks so he could see avant-garde films by directors like French surrealist Luis Benuel that showed there.
At his point, the drummer was also going under the name Scotty: “I was using the name Scott Thomas,” he explains.  “It was a stage name I had. I had a group after Tangerine Puppets called Butch, alongside Monte Melnick [future Ramones tour manager]. I was lead singer and guitar player. We dressed in the rock’n’roll fashions of the times. We were part of the glitter scene but didn’t wear makeup or anything. My most outlandish outfit would have been a silver Mylar plastic Granny Takes A Trip shirt jacket, with no shirt, suspenders and a tie.”
It was during this period he encountered The Stooges: “I heard them on late night radio when they first came out, and I thought they sounded interesting, like an avant-garde version of The Rolling Stones. Next time I saw Johnny, I mentioned he should check them out.”

Tommy knows the exact moment when he realised how good the Ramones were. It was in ‘74, in the Art Garden. Dee Dee and Joey were going over one of Joey’s songs, ‘Judy Is A Punk’.
“The whole thing clicked in my head,” Tommy says. “Before that, I thought the band was good and interesting. ‘Judy’ made the difference. It was beyond good. There was brilliance there.”
Choosing the name was easy. They lifted it from Dee Dee’s Sixties alias. Other stories have appeared as to its origin, however. It was chosen in homage to the street tough image of the Fifties greaser rockers. Joey told a journalist that they thought it had a ring to it – like “Eli Wallach”.
“We made a list of 40 names on a piece of paper,” Tommy recalls. “That was the one we all agreed upon. Also, it sounded ridiculous. We immediately decided to call each other Ramone, probably because of The Walker Brothers, 10 years before. We thought it would be hilarious.”

Tommy was my dearest and oldest friend.
We grew up together in Forest Hills Queens New York.
I went to Stephen A Halsey Jr High and Forest Hills High school with him. He got me to pick up the bass guitar and enter into the crazy world of rock music. We played in several bands together (Triad & Butch) here in NYC over the late 60's and early 70's. We built and managed Performance Studios in NYC, a recording/rehearsal studio the Ramones started in. I worked with him when he was in the Ramones and well after he left. He had an advanced musical foresight, well ahead of the times in forming and being part of the Ramones. He was a great musician on the guitar, then the drums, later on the mandolin, banjo, fiddle and many more instruments. His musical expanse bridged from Punk to Indie Bluegrass.
I mourn the passing of the last of the original Ramones, my friend and a true musical visionary.

Monte A. Melnick
"On The Road with the Ramones"

Thanks Monte. My condolences. CC