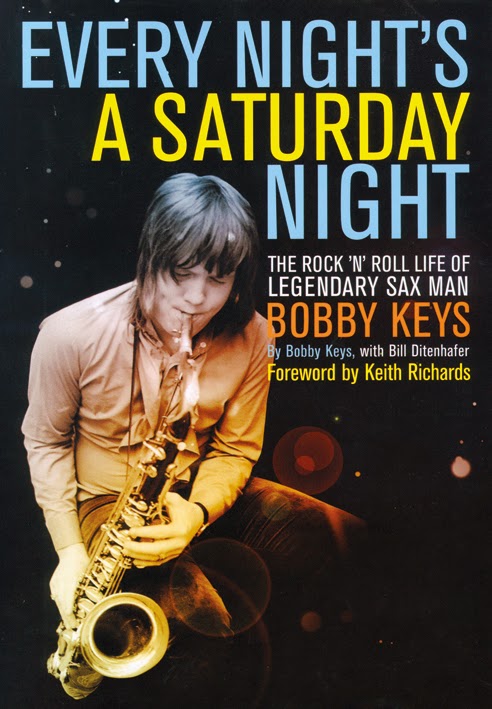 I was going to post the second half of my interview with Ray Davies today, but that can wait until tomorrow as last night I heard of the sad death of Bobby Keys, one of the all-time great rock and roll saxophone players, along with King Curtis and Clarence Clemons.
In May of 1971, as I report elsewhere on Just Backdated, I was flown to Cannes for a party to celebrate the Rolling Stones signing with Atlantic, and at the party I was introduced to him by Mick Jagger, no less. So I whipped out my pen and note book and did a quick interview, not the most profound I’ve ever done but it seems like the right thing to post it today.
In 2012 Omnibus Press published Bobby’s biography Every Night’s A Saturday Night, with a Foreword by his best pal Keith Richards. It’s a wild ride.
RIP Bobby.

“It's Bobby Keys, the greatest saxophone player in the world,” said Mick Jagger. And Bobby smiled modestly towards me.
“A great bunch of guys, the Stones. But there are plenty of others better than me. I can't even read music,” drawled Bobby in his Texas accent. “I just love playing rock and roll and the Stones are just a great little rock and roll band.”
Looking at Bobby's young face, it's hard to believe he actually started out with Buddy Holly. And has other impressive references too: Delaney & Bonnie, Leon Russell and Joe Cocker's Mad Dogs & Englishmen.
At the weekend Bobby was staying with Keith Richard near Cannes and while everyone fussed around the Stones at their press conference, a chat with Bobby seemed like a good idea.
How did the Stones-Keys partnership come about, I asked. “When I met them I was working with Delaney & Bonnie in California and they came over to rehearse near us. One night they came to listen to us playing and the next day I got a call asking me if I'd like to put a horn solo on a track on the Let It Bleed album. It was 'Live With Me'.
“I didn't see or hear anything from them until I came over to England to work on the George Harrison album [All Things Must Pass]. I got another call from them and went to Olympic studios to work on their album and ever since then I've been really involved. They're a damn good band, and I really dig going on the road with them.”
Bobby has always been content to trade his skills wherever they are needed, and seems uninterested in being part of a permanent group. “This idea of a floating rock and roll band appeals to me. The Joe Cocker tour was one giant affair where you just came along and played. It was the same with Leon Russell and Delanie & Bonney.”
Bobby's hometown is in Texas and it was there he met up with Buddy Holly. “I was just a little kid seven years old when I heard my first rock and roll. I went down to see Holly and he was really doing something different.
“I started hanging around with Buddy and learning to play the horn and eventually I got a gig with Buddy Knox. I joined him for some recording and went to work with Bobby Vee after that.
“Of all the bands I've worked with I think I prefer the Stones. They have a personal relationship which makes them a really together group.”