MOJO WHO FEATURE – What’s Going On? 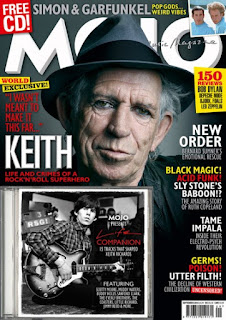 Visitors to Just Backdated are probably the sort of people who read Mojo, the UK’s best monthly rock magazine for the mature fan in what is now a far from crowded market. And it might be that a few of you have noticed that I’d written a letter to their ‘Theories Rants Etc’ column that appears on page 10 of the current (September!) issue with Keith Richards on the cover. Leaving aside for a moment the question of why the September issue should be published in July, I need to make it clear that the second half of my letter, as published, was not written by me. 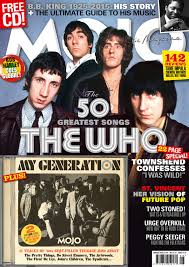 To backtrack, the August issue above (published in June!) contained an interview with Pete Townshend surrounded by a long feature on The Who entitled ‘The 50 Greatest Who Songs’, all of them listed in order of merit, chosen – presumably – by the magazine’s learned staff. ‘Baba O’Riley’ was at number one, followed by ‘My Generation’, then ‘Fooled Again’ etc, each song accompanied by a few paragraphs by one of their regular writers. I think I’d have placed ‘See For Miles’ a bit higher up the list but that aside the 50 songs were pretty much what you would expect them to be.
Where I took issue was with a sidebar entitled ‘The Five Most, Er, Unique Who Songs*’ which lists ‘A Man In A Purple Dress’, ‘Mary Anne With The Shaky Hand’ (not that unusual really and ought to have been in the top 50 in my opinion), ‘However Much I Booze’ (ditto), ‘Waspman’ and ‘Chache Cache’. What struck me as extraordinary was that no one on Mojo had thought to include the lovely ‘Blue Red And Grey’ in this list.
My letter to them read as follows: “Shame on you for not including ‘Blue Red And Grey’ from The Who By Numbers on your list of ‘unique’ Who songs. To quote myself in my book on their music: ‘In which Pete, accompanying himself on ukulele and unsupported by the rest of the band, declaims the millionaire lifestyle in favour of the virtues of a simple life. An uncomplicated melody, performed with the kind of tongue-in-cheek sincerity that Pete had previously demonstrated on his first solo album Who Came First. The silver band adds to the sense of poignancy. Utterly charming.’”
For reasons which I have yet to establish, what I had written was followed immediately, not even in a new paragraph, by 13 lines about Fleetwood Mac which must have been written by someone else. In them the writer extols the virtues of the three albums that F Mac released immediately prior to Buckingham and Nicks joining the group, a period of their history that is certainly overlooked these days but about which I have little knowledge or opinion.
The editor of Mojo, my friend Phil Alexander, has thus far ignored my letter of protest about what is obviously an editorial glitch. In the immortal words of Marvin Gaye: “What’s going on?”

* A pedant writes: “You cannot have ‘most unique’. Unique is unqualifiable. Something is either unique or it is not, which makes the title of this sidebar grammatically flawed.”
Posted by Chris Charlesworth

Thank you, Chris, for your observations in general and this one in particular. I'm referring to your view of "Blue Red And Grey", not what MOJO did in the letter column. It is certainly unique among Who songs, as it has neither guitars, keyboards or percussion of any kind. In fact, the only other song by a major act with those qualifications that I can think of is "Eleanor Rigby"

BTW, I agree with the pedant.

As I lay in bed last night, I thought of another entry: "She's Leaving Home", also by the Fab Four.

Might this be a worthy subject for a column: Rock songs sans rock instrumentation.