From the sofa in my living room it seemed that The Who had upped their game a notch or two for Glastonbury, perhaps on account of Pete being displeased by the lack of monitors. As I’ve noted too many times to count now, there’s nothing like something going wrong to set things on edge and create the tension that makes for a powerful Who performance. As it happened – and this is why my report is late – I’d asked a friend who lives in Frome and was at Glastonbury on Sunday to write a review for me to post on Just Backdated, but her two young daughters were tired and shagged out after a long day’s trudging around so she and her husband had to leave before The Who came on. I know, a bit like watching that Titanic movie and leaving before the unfortunate incident with the iceberg, but there you go.
One thing that did strike me about The Who’s set was not just how young the audience was, much younger than most of us in Hyde Park, but how they seemed to know all the songs too. Beautiful young girls in their teens or early twenties, either at the front or perched on their boyfriends’ shoulders, seemed to recognise the songs as if they were still on Radio 1’s playlist, singing along as if ‘My Generation’, ‘I Can See For Miles’ and ‘Pinball Wizard’ were released last year, and screaming ‘It’s only teenage wasteland’ during ‘Baba O’Riley’ as if Who’s Next was a contender for Album of the Year at this year’s Brit Awards.
The TV coverage was brutally edited, at least from a serious Who fans’ point of view, with six songs (‘Bargain’, ‘Join Together’, ‘Love Reign O’er Me’, ‘Eminence Front’, ‘Amazing Journey’ and ‘Sparks’) omitted from the actual Glastonbury set, which omitted two songs (‘I Can’t Explain’ and ‘I’m One’) from the show I saw in Hyde Park which, again, omitted six songs (‘Substitute’, ‘So Sad About Us’, ‘5.15’, ’Bell Boy’, ‘A Quick One’ and ‘Magic Bus’) from the long set they played in Birmingham last December. So it seems that the more I watch of The Who Hits 50 tour, the shorter the sets become, to no one’s benefit except possibly Roger in order to conserve his voice. I’d better avoid any more shows in case the set becomes a bit like the Miami Superbowl in 2010, that 12 minute and 35 seconds mashup of ‘Pinball’, ‘Who Are You’, ‘Baba’, ‘Fooled Again’ and the finale to Tommy. 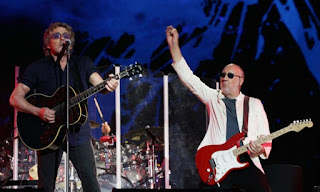 But back to Worthy Farm where Pete launched The Who’s set with a slightly cynical tirade: “Here we are again. We’ve got a lovely, simple job to do tonight which is to send you home happy. And maybe a bit deaf.” Well, they certainly succeeded in the first of these tasks and, although it’s difficult to tell from the TV, I suspect they were a good bit louder than at Hyde Park where there’s a strict limit on the volume. The Who – well, Pete and Roger – have an honourable history of excelling at festivals that goes all the way back to Monterey in 1967, then Woodstock and a couple of Isle of Wights, and, perhaps with this tradition in mind, they pitched in with the sort of aggression you don’t really expect from performers of their age, Pete windmilling furiously, Roger in good voice and well on top of things and the rest of them, especially Zak, determined to follow Pete’s example.
And much appreciated it was by this vast audience too, the weather forecast of intermittent rain thankfully inaccurate which was a relief after their rain-soaked Sunday night headlining slot on the Pyramid Stage in 2007. On the TV the highlights were pretty much the same as at Hyde Park: ‘Kids’, ‘See For Miles’, the Tommy medley – ‘Listening to you…’ really is primed for a huge festival crowd, but I wish they’d screened ‘Sparks’, if only to see whether it caught fire as it did two nights ago in London – ‘Baba’ and ‘WGFA’. As noted, they were dissatisfied with the on-stage sound, which prompted Pete to pull down some of the screens surrounding Zak at one point and Roger to finish the job during a magnificent, climactic ‘Fooled Again’. At the end Pete seemed slightly disappointed, apologetic even, but he had nothing to feel sorry about. The Who sent the multitudes home happy, as they’ve been doing now for half a century.
The newspaper reviewers were generally kind to them, which is not always the case these days, most citing The Who, Patti Smith and Florence + The Machine as the stars of the event and Kanye West a disappointment, but I was amused by Emma Clark of the Press Association, reporting for the Daily Telegraph, who breathlessly informed its readers that Pete used strong language from the Glastonbury stage. “It's not the first time Townshend has been caught swearing on stage,” she added, clearly shocked. Indeed not, I thought. Where do these people come from? And why are they sent to report on The Who?
Finally, I am at a loss to know why the BBC retain Mark Radcliffe as an announcer. A third-rate John Peel impersonator, he seems totally unable to put across any enthusiasm for the music, be it The Who or anyone else. He adds nothing to the Glastonbury coverage, offers no critical perception and his deadpan, slightly sardonic, style became more and more irritating as the weekend progressed. A few years ago Fearne Cotton was similarly useless, “How amazing was that?” her response to sets by absolutely everyone she saw. Well, at least she was easier on the eye.
Posted by Chris Charlesworth

Whilst I totally agree with your observation regarding the dullard Mark Radcliffe, I was a little less impressed by The Who than you were. Admittedly I was viewing on TV.

A problem I have with these post-millennium Glastonbury festivals is that the young crowd are really listening to a playback of their greatest hits CDs in their head whilst trainspottering the legends on stage, adding another “I saw (add name)” to their collection. Johnny Cash, fine. Dolly Parton, okay. Shirley Bassey, hmmm. But Lionel Ritchie? C’mon now.

Not that I can blame anyone under the age of 37 for never even being on the same planet as Keith Moon. (Hmmmm. Thinks: “Who was???”) But they do make for a p*ss easy crowd to please.

For me, it just didn’t look like any of the bRand were that pleased to be there, let alone acknowledge each other. I thought it a satisfactory, workmanlike gig. Not really a performance befitting a “50 Years”, televised, Glastonbury Festival.

I await the orchestral version of “Who Sell Out”. Bound to happen.

Get all your favorite alcoholic drinks on Duty Free Depot!