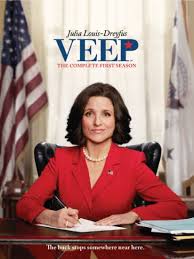 Like records banned by the BBC and pretty much anything that arouses the indignation of Daily Mail columnists, I am always keen to check out a sit-com that is prefaced by a stern warning about strong language and adult themes. So it is with Veep, for my money one of the funniest TV shows ever broadcast, now in its fourth season and possibly mistitled since the leading lady, Selina Meyer played by the wonderful Julia Louis-Dreyfus, has – after three seasons as Vice-President (Veep) – now become the President of the United States, or POTUS as the Commander-in-Chief is known in White House jargon.
Simply put, Veep is a political satire that strips away the bullshit by purportedly revealing what really goes on behind closed doors; a fly on the wall look at how cut throat American politics really is. In reality the dialogue is not just brilliantly scripted but as sharp as a razor and incredibly funny too, criss-crossing between the many characters so rapidly I’ve often had to pause and replay just to understand what was said. Almost all of it involves foul language on a massive scale – probably the highest number of fucks per episode on TV ever – with insults traded fast and furious as incompetence is exposed, downright lies exchanged and vicious backstabbing carried on without compunction.
Veep is an ensemble piece, shot cinéma-vérité style, with Dreyfus leading a large and strong cast of actors, most of them her employees, who flit rapidly in and out of scenes and overlapping storylines, mostly set in and around Washington DC. Everything is done in a rush, with calamity after calamity piling up, and plotlines quickly abandoned as a greater, potentially funnier, disaster looms. Many of the characters are downright nasty, all of them fear for their jobs and loyalty is for mugs. Much of the humour is in throwaway lines and sly asides. Political correctness exists only as a veneer since anything and everybody can be bought or traded, not least ethics and votes. Sex is played for laughs, realistically and with running gags about the characters’ love-lives, and political lobbyists are the scum of the earth, no doubt the most accurate reflection in the whole show.
Veep really is the funniest thing on TV right now and I cannot recommend it highly enough.
Posted by Chris Charlesworth

Couldn't agree more. Veep is absolutely brilliant, it should be on terrestrial tv so more people see it.

"bitches be cryin', pimps be dying'; it's Jonah Ryan"

Thanks or the Up on this. Just say through the 1st two seasons. Now the current Labour Party shenanigans are even more hilarious.

Dear Chris, I've come across this and some of your other TV reviews, and I wanted to know if you might be interested in writing some short analytic pieces on the growing film & TV analysis website www.screenprism.com

Please have a look at the site and if you're interested email sbmccullough@screenprism.com so I can send along more information. Thanks!

Follow our signals NOW and gain up to 270% per day.