BOBBY FULLER - I Fought The Law

‘I Fought The Law’ by the Bobby Fuller Four was and remains a brilliant record. It was a number nine hit in the US in early 1966, but it only reached number 33 in the UK that April which is probably why it escaped my attention, at least until 1971 when a 12-album vinyl set called Oldies But Goodies landed on my desk at Melody Maker. Since each disc had at least a dozen tracks, albeit crammed together so the hi-fi was lo-fi, it was a terrific package and enabled me to catch up on numerous 1950’s hits from America that I’d either heard but never bought or never heard at all. 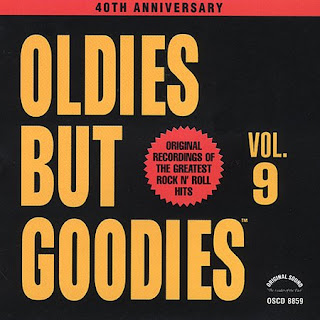 One of them, on Volume 9, was ‘I Fought The Law’ and, boy, was I impressed. It’s no exaggeration to say that out of all the 140 or so tracks on the set, this was the one I ended up playing the most and, of course, transferring to cassette so as to play it in my car. It was the crispness of the song that impressed me the most, the clean, sharp guitar licks between the verses, the simplicity of the song itself as it rolled along, powered by a terrific beat, not unlike Buddy Holly of course, and – by no means least – the subject matter that suggested the hero was an outlaw from the Wild West who wrote it 100 years ago while languishing in jail in Dodge City, no doubt contemplating the gallows on the hill. A bit later I discovered it was written in 1958 by Sonny Curtis who joined The Crickets after Buddy Holly died in 1959, and recorded originally for their In Style With The Crickets LP in 1960. Bobby Fuller recorded it twice, once for his own Exeter label and later for his manager/producer’s Mustang Records, and it was this later re-recording that became a hit and which turned up on my Oldies But Goodies album.
When I lived in America and worked for Melody Maker I was minded in 1974 to seek out Bobby Fuller, only to learn by word of mouth (there was no internet in those days and no rock encyclopedias to refer to) that he’d died aged 23 in 1966, probably murdered by persons unknown, a circumstance that remains unresolved to the present day and, in view of the time that has elapsed, unlikely ever to be resolved. Back in 1974 I didn’t pursue the story, but last year a book called I Fought The Law: The Life And Strange Death Of Bobby Fuller by Bobby’s brother Randell Fuller was published. I read it over the past month but, as I thought, there are still no firm conclusions as to what happened. 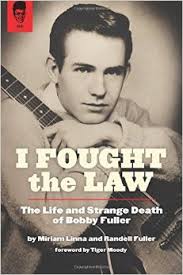 Although crammed full of information, the book could benefit from a decent edit, is rather cheaply produced and the pictures, dotted throughout the text, are too small and very low resolution. This is often the case with small independent publishers who don’t have much to invest in their titles, but I commend Kicks Books for taking the chance anyway and offering me the opportunity to learn all I could about Fuller, clearly a musician with a big future had not fate cut him down.
On the morning of July 18th Bobby Fuller’s body was found in his car parked outside the apartment building where he lived on Sycamore Avenue in North Hollywood. “Bobby was there lying in the car, all beat up real bad and gasoline all over him and there were burns on him,” says his friend Rick Stone, quoted from the book. Others who saw the body in the car noted dried blood on Bobby and that there was a gas can in the passenger seat. He was wearing worn slippers which suggested his body had been dragged across rough ground before being placed in the car and driven to Sycamore. Amazingly, the police attributed his death to suicide – “asphyxia due to inhalation of gasoline,” noted the coroner – and didn’t investigate further, possibly because they were preoccupied with the sudden and unexpected death of the LAPD Police Chief two days before, or because it was a mob hit best left alone.
So who did kill Bobby Fuller? Speculation has included Charles Manson, though his killing spree began later, an unnamed mob figure displeased by Bobby’s interest in his girlfriend and even his manager/producer Bob Keane who had the misfortune to also work with Ritchie Valens and Sam Cooke, two other singers that died far too young. Then again Keane also worked with Arthur Lee, Barry White, Frank Zappa and Glen Campbell. A more likely theory is that Bobby’s death was somehow connected to his involvement with the notorious label owner Morris Levy, owner of Roulette Records, which had signed a distribution deal with Keane’s label that Bobby was unwilling to honour. 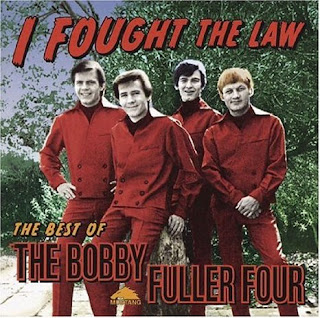 Bobby Fuller left behind two albums and a handful of singles, all of which have been compiled many times. Reading the book prompted me to buy I Fought The Law: The Best Of The Bobby Fuller Four which seemed the best of the bunch, and I’ve been charmed by it over the past three weeks, convinced that its mix of Tex-Mex rock’n’roll, chirpy harmonies and rattling guitar work ought to have propelled the BF4 into the area that The Monkees occupied, at least in terms of their quality singles like ‘I’m A Believer’, ‘Last Train To Clarkesville’ and’ ‘(I’m Not Your) Steppin’ Stone’, if not their TV show boy-band appeal.
There can be no question that Fuller was a disciple of fellow Texan Buddy Holly, though in truth he updated Holly’s sound and guitar style. He learned his trade in and around El Paso, fronting the Four on his Holly-like Sunburst Stratocaster, with brother Randell on Fender bass, Jim Reese on second guitar and Dewayne Quirco on drums. This was around the same time as The Beatles were cutting loose in Liverpool before being signed by George Martin, so any suggestion that the BF4 were hanging on their coat tails is well wide of the mark.
The music on my compilation sounds like a group straining at the leash, not far removed from the garage bands on Lenny Kaye’s great Nuggets compilation. It’s dated now for sure, but there’s something there – a touch of Beach Boys harmony, a nice melodic bent, that can’t-quite-put-your-finger-on-it-but-you-know-it’s-good fizz and pop – that would make any A&R man with ears open his cheque book. And, of course, there’s ‘I Fought The Law’, one of the great singles of the era, covered – perhaps more famously but with less panache – by The Clash and countless others.
As the blurb on the back of the book points out, Bobby Fuller wrote and recorded his own music, built his own studio and released his own records, so he was both determined and ahead of his time. He certainly didn’t deserve his fate.

Im sure that there were many in the music biz,who had a VERY good idea exactly who wasted Fuller, and why. These were pretty nasty fellows,and they knew that those who made a stink had bad things happen to them or their families.Those who had a hand in the deed, or were are blood kin,have to be at least 70 to 100.Eventualy, when the last has passed on, the full ugly story will come out.One has to wonder how much Keene come to know before he passed on.Levy was one extreamly nasty fellow, nice warm place in hell for him.

Nice writing Chris. I liked I Fought The Law as soon as it came out by the Crickets and later by the BF4. This piece fills in lots I didn't know. Great drummer in Dewayne Quirco, too. Frederic.

If you need your ex-girlfriend or ex-boyfriend to come crawling back to you on their knees (no matter why you broke up) you gotta watch this video
right away...