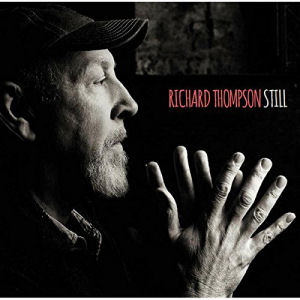 For many years now, whenever I get my voting form for the Rock’n’Roll Hall of Fame I include a note expressing my displeasure that Richard Thompson has never been nominated, let alone inducted. He is, of course, a fine songwriter and one of the great guitarists in any style, rock, finger-picking acoustic, country licks, jazz, folk… you name it. In his beret and unassuming clothes, he’s never been fashionable and his stage manner has always been a bit tentative, at least until the minute he begins to play, which might explain why he’s been ignored by the rather secretive committee that decides who should be on the voting form, experts who’d sooner admit the likes of Kiss, Guns’n’Roses and the dreaded Dave Clarke Five to the HoF than a genuinely talented figure like Thompson. Still, Little Feat aren’t in there either so he’s not alone in this.
A five-hour round trip in the car this weekend enabled me to listen several times to Thompson’s latest album Still, another superbly crafted, immensely satisfying piece of work. Produced by Jeff Tweedy of Wilco, Thompson watchers could be forgiven for assuming that their hero would come under his influence and produce something a bit rougher round the edges than the polished creations they’ve come to expect but this is not the case. As ever Thompson flits between the many musical styles he’s honed over the years and, on most of the tracks, sings about his favourite subject, angst-filled relationships and difficult situations. The exception, at least lyrically, is the closing number, ‘Guitar Heroes’, a seven-minute tribute the men who inspired him as a boy, to wit Django Reinhardt, Les Paul, Chuck Berry, James Burton and Hank Marvin, whose styles he adopts in turn, note for note, lick for lick, on a long and rather droll song about how his guitar dominates his social life.
Still opens with ‘She Never Could Resist A Winding Road’, one of those soupy swirling ballads, the kind of song that registers immediately, sturdy and traditional, a bit like ‘Keep Your Distance’ from 1991’s Rumour And Sigh; this one about another footloose female, not unlike the girl he sang about on ‘Beeswing’, who probably broke his fragile heart. But it’s not all doom and gloom: ‘Beatnik Walking’ is upbeat and as catchy as hell, about a stay in Amsterdam, and ‘All Buttoned Up’ is about a girl who, to his evident frustration, keeps her knees together.
‘Pony In The Stable’ has a touch of the Fairports about it, a bit of a jig, while ‘Where’s Your Heart’ is a more thoughtful song about a cold oppressor, madrigal-like in the Thompson tradition of unhurried songs. The penultimate song, ‘Dungeons For Eyes’, conveys a righteous sense of anger as Thompson recounts a social encounter with a crooked politician whose hand he is expected to shake.
And then we’re into ‘Guitar Heroes’ which, after the skilfully executed cameos, closes with a kind of confession from a man who eternally seeks perfection in his work: “Well I played and played until my fingers bled, I shut out all the voices but the voice in my head, now I stand on the stage and I do my stuff, and maybe it’s good but it’s never good enough.”
I’m inclined to think it is Richard, especially when you make that guitar sing like a choir of hummingbirds.

Thanks again for another interesting post. However, I'm writing from near Chicago, and we know that local boy Jeff Tweedy is in Wilco, with a "c". Could you have been thinking of Wilko Johnson when you wrote this?

Whoops, thanks for that Keith - CC