THE WHO – Last Three Track Singles

Here’s my text the final three Who singles that were included in the Track Records box set. 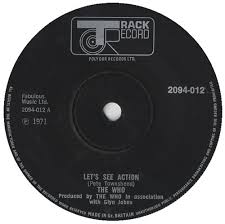 B: When I Was A Boy
Written by John Entwistle. © 1971 Whistle Rhymes
Produced by The Who, associate producer Glyn Johns.

Like ‘Won’t Get Fooled Again, ‘Let’s See Action’ is a call to arms, albeit less clamorous in tone with an almost folksy feel, its slight but appealing melody carried along by a trilling piano played by Nicky Hopkins. It was the first in a series of three Who A-sides to utilise songs left over from the Lifehouse sessions, the cream of which appeared on Who’s Next. So great was the surplus, in fact, that Who’s Next could easily have become a double album but wise heads at Track felt another double was a bit much so soon after Tommy, and other leftovers would appear in 1974 on Odds And Sods, an album that rounded up several interesting unreleased Who songs.
Another of Pete’s Meher Baba tributes, ‘Let’s See Action’ features a poignant middle-eight that contrasts Roger’s determined vocal with more introspective lines from Pete that are both assured and re-assuring. Its lowly chart position was largely immaterial since success on the singles charts was no longer of primary importance now that The Who were billing themselves, with no little justification, as the world’s most exciting live rock band. Indeed, it was rather unedifying to see them competing on the charts with the new wave of young glam rock acts like T. Rex, Slade, and Sweet.
The tastefully arranged brass introduction to John’s ‘When I Was A Boy’ sounds like it could have been recorded by a colliery band from South Yorkshire. This sets the mood for a nostalgic song about age and disillusionment, more sincere than is usual for The Ox but not one of his best Who B-sides. 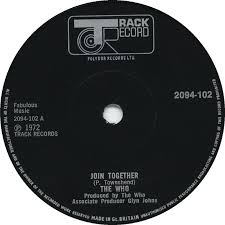 A: Join Together
Written by Pete Townshend. © 1972 Fabulous Music Ltd.
Produced by The Who, associate producer Glyn Johns.

B: Baby Don’t You Do It.
Written by Eddie Holland, Lamont Dozier and Brian Holland. © 1964 Jobete/Carlin.
Produced by The Who, associate producer Glyn Johns.

Opening with Roger on Jew’s harp and harmonica, or possibly Pete on synthesizer reproducing the sound of a Jew’s harp, ‘Join Together’ was a key song in Lifehouse, outlining Pete’s ultimate aim for band and audience to become one. Although – like its companion piece ‘Let’s See Action’ – its rhythms bear little relation to the power chord style normally projected by The Who, the band play it quite superbly, jostling along together with effortless syncopation.
To promote the song, The Who made a memorable promotional film inside a studio that ended with the group walking through their audience who follow them across the set.
Recorded live at the San Francisco Civic on December 13, 1971, ‘Baby Don’t You Do It’ is The Who’s take on a song first released by Marvin Gaye in 1964 and a fine example of what they termed ‘Maximum R&B’. It is a fierce work out, highlighted by Keith’s energetic drumming, Roger’s strident vocals and The Who’s unique ability to turn soul into furious rock at the drop of a hat. With the band on the same form as they were the night they recorded Live At Leeds, this is The Who at their live best, playing off one another as no other band could, outstanding both individually and as an ensemble. There’s some lovely bass work, and Pete’s buzz-saw guitar solo towards the end is terrific. During a furious ‘head for home’ climax Pete, John and Keith play their hearts out with Roger hollering to be heard above the din.
The Who often played this song live during 1971 but abandoned it because the songs from Who’s Next offered them a wider choice of quality material. A studio version was recorded at the Record Plant in New York in March 1971 during the unproductive Kit Lambert-produced sessions for Lifehouse, in which they were joined by Leslie West, guitarist with Mountain, whom they had encountered while on tour and who was invited to play lead over the top of Pete’s rhythm. 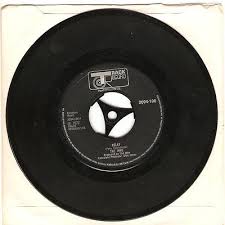 A: The Relay
Written by Pete Townshend. © 1972 Fabulous Music Ltd.
Produced by The Who, associate producer Glyn Johns.

Wah-wah guitar, or ‘treated synthesizer guitar’, opens ‘The Relay’, the third and final single plucked from the residue of Lifehouse, a full-tilt rocker about the need to exchange ideas and information or at least pass them on to the next generation. With a ringing acoustic guitar in one channel and the wah-wah in the other, not to mention John’s exemplary bass playing high up the fretboard, there’s a wealth of good ideas, both musical and lyrical, here; also, a nice allegory about passing on the baton in a relay race. It was far too weighty as a single, though.
The Who’s profile was unusually low throughout most of 1972, success having bought them the opportunity to relax, but they did make an effort to promote ‘The Relay’, appearing on Russell Harty’s TV chat show in January of the New Year, during which Keith ripped off Pete’s shirt and threatened to undress while the host struggled to maintain order.
It would be generous to describe ‘Waspman’ as undistinguished: three minutes of pure lunacy allegedly originated by Keith during a long and boring flight across America when he adopted the guise of a wasp and ran around the plane making buzzing noises with a groupie’s bra wrapped around his face. Relocated to the recording studio and inspired by a wasp costume someone had given him, Keith continues make buzz noises and shout ‘sting’ while the band play a truly monotonous three-chord riff with Roger on harmonica buried somewhere in the mix. On past instrumentals credited to Keith he’d made a point of doing something special on the drums but, alas, not this time.

Did you know you can create short links with Shortest and make money for every click on your short links.