THE WHO – More Track Singles

Last year I posted – in dribs and drabs – the text that I had written about nine of the 15 Who singles included in the Track Singles Box Set that Universal released in September, leaving five unaccounted for. (The sixth was the withdrawn ‘See Me Feel Me’/’Overture’ which was subsequently included on the Tommy EP.)
Being as how the box set has probably sold out its limited run by now, it seems only sensible for me to post the remaining entries, the Tommy ones today and the others, all Lifehouse songs that didn’t make it on to Who’s Next, in a day or two. 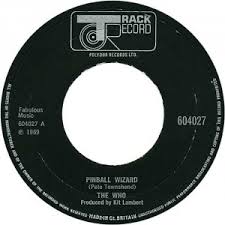 With some justification Pete Townshend has often been cited as the greatest rhythm guitarist in rock, and no better evidence survives than the furious acoustic strumming that underpins ‘Pinball Wizard’, the best known song from Tommy and another serious contender for the finest Who song of all time. Recorded towards the end of the Tommy sessions, at Morgan Studios in Willesden, London, on February 7, 1969, ‘Pinball’ is a rock tour de force, brimful of energy, power chords, great lyrics and tight ensemble playing from the opening chord descent to the upward key change near the end. The concept of a deaf, dumb and blind pinball champion might stretch the imagination but anything can be forgiven in the context of this song.
It is difficult now to imagine Tommy without ‘Pinball’ and we have the last minute intervention of Nik Cohn, one of the UK’s most perceptive rock critics in the sixties and a personal friend of Pete and Kit Lambert, to thank for its inclusion. Evidently Pete sought Cohn’s opinion of Tommy as a work in progress and the writer suggested livening it up somehow: because Cohn’s girlfriend at the time really was a pinball wizard(ess), Pete took the hint. By 1969, Cohn was writing rock reviews for the New York Times and there seems little doubt that he was strong-armed into giving Tommy a rave review on the strength of the pinball connection.
Be that as it may, nothing takes away the sheer delight of this number, one of only two (the other was ‘See Me, Feel Me’) from Tommy to outlast the rest of the opera and remain as a highlight in The Who’s live sets.
Rod Stewart sang a heavily orchestrated version in Lou Reizner’s all-star adaptation of Tommy in 1972, while Elton John sang it during a memorable set piece in Ken Russell’s 1975 Tommy movie (his version reached Number 7 in the UK). Curiously, in the UK, it was also covered by The New Seekers in a medley with ‘See Me Feel Me’, whose version reached Number 16 in 1973. None of these covers come close to matching The Who’s version however: Pete strumming that inimitable intro, playing the guitar like he was ringing a bell, punctuated by the thunderous sound of his powerful guitar stabs (that John reproduced live by hammering down on his bottom bass string).
Keith leads ‘Dogs Pt 2’, a powerful instrumental jam recorded five days after ‘Pinball’ at IBC, in the same vein as he leads ‘The Ox’ from their debut album, though this was probably unrehearsed. Featuring solos from Pete, John and Keith (in that order), it’s a frenzied, garage band style rave-up and, along with ‘Cobwebs And Strange’ from A Quick One, the nearest thing to a Keith Moon drum solo in the entire Who catalogue. Moon was never one for drum solos – “They’re boring,” he’d say with his usual pinpoint accuracy – but in many respects his work with The Who, at least on stage, was one long drum solo.
As the B-side of ‘Pinball Wizard’, a Top 10 single in both the UK and the US, ‘Dogs Pt 2’ would have earned its composers a tidy sum in royalties: no doubt Keith squandered his on wine and women but it was probably sufficient to keep Towser and Jason, Pete and John’s respective pet dogs, in Chow for the rest of their days. 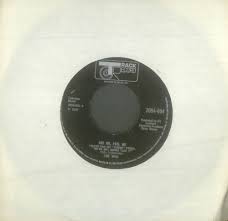 A See Me, Feel Me
B Overture
Track single 2094 004 – (Released October 1970 then withdrawn).
This single was withdrawn but the two tracks appeared on the Tommy EP below. 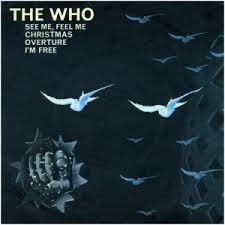 B: See Me, Feel Me
Written by Pete Townshend. © 1969 Fabulous Music Ltd.
Produced by Kit Lambert.

The Track Records marketing department was never slow to extract maximum mileage from the gems in their catalogue. As well as this 33 rpm EP of four songs from Tommy, they released a series of earlier Who (and Hendrix) albums in their budget Backtrack series and the double Tommy album as two individual LPs without the fancy packaging, ostensibly to make it more affordable.
Even rock operas need overtures and like the overtures that preface operas by Mozart, Verdi and Rossini this one contains a well arranged mix of instrumental readings of the songs that will follow, most of them linked together by the rumbling, bass-heavy ‘Go To The Mirror’ riff. The guitar parts are mostly played on Pete’s acoustic Gibson J200, which sets the mood for the entire work, but John’s French horn adds interesting melodic touches and, as ever, the choral work and drums are quite superb. Indeed, in many respects Keith Moon’s work on Tommy represents his greatest contribution to The Who’s catalogue, the opportunity that enabled him to become an entire orchestra within himself, most notably on the lengthy and breath-taking instrumental track ‘Underture’. Nevertheless, the best moment in ‘Overture’ comes towards the end when an organ arrives to pound out the block chords of ‘Listening To You’ from the ‘See Me, Feel Me’ excerpt. At the close, after a ‘Pinball’ fanfare, Pete is left strumming alone for the segue into ‘It’s A Boy’.
‘Christmas’, with its nagging, slightly off-key background vocal, is upbeat and slightly unnerving, and seems designed to establish Tommy Walker’s isolation from other children. The recurrent ‘See Me Fee Me’ motif is introduced during a central refrain before the song resumes.
A memorable six-chord riff introduces ‘I’m Free’, one of the album’s more straightforward rock songs in which Tommy throws off the shackles of his handicaps, and urges his followers – those attracted by his prowess at pinball – to follow him. Tinkly piano, a great acoustic solo and a nice re-use of the by now familiar ‘Pinball’ intro riff all reinforce a song that, set apart from Tommy, became a US single in its own right.
Strictly speaking, ‘See Me, Feel Me’ is the coda to ‘We’re Not Gonna Take It’, the closing song on Tommy and finale to the entire piece. A circular, looping prayer for unification with churning major chords, it is perhaps the simplest yet most effective pieces of music that Pete has ever written. ‘See Me, Feel Me’ is the most obvious hymn to Meher Baba – the Indian spiritual master to whom Pete became devoted – in The Who’s catalogue, although there are other less obvious examples in the Lifehouse cycle of songs that became Who’s Next and also in Quadrophenia. ‘Listening to you...’ is crystal clear homage and when played live it appeared for all the world as if The Who were paying a remarkable tribute to the audience to whom they were singing. In this respect, it couldn’t fail to lift the spirits – just as all hymns are designed to do.