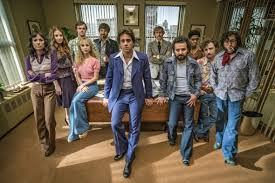 So much, for that "concert". With the band playing (the part of) "Led Zeppelin" in one scene, we see only the back of the dude, (who plays "Jimmy page") a "stand in" perhaps?possibly, a POV from the back of the stage, by finestra? As for that, "Harrison Coffer" (who plays the "J.P" imitator, should've been listed in the closing credits, as "Stunt Double,for Jimmy page" anyway, he was missing, from the "backstage" scene, you know, (where the heated discussion,between finestra, and plant) and should've had more "face"time,(but for fear of law suit threat, by the real J.P.) he was only filmed, from the back. Maybe, in a future episode, we might see his front, and face, and maybe just maybe, have a speaking part, like the dude, that played the part of "plant".

Follow our trades NOW and profit up to 270% a day.