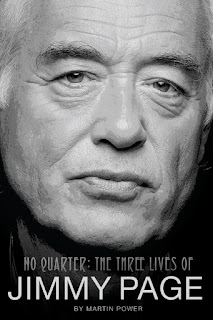 For the last few days I have been attending to final proofs of the forthcoming book No Quarter: The Three Lives Of Jimmy Page by Martin Power that Omnibus Press will publish in September. The book is nearing completion, all 704 pages of it, and I have referred to it before on Just Backdated in a post about two instances of Page’s impressive – but largely unheralded – work as a session musician before he joined the Yardbirds and subsequently assembled Led Zeppelin.

The extract below focuses on the first time Page and singer Robert Plant spent any time in each other’s company. It is July of 1968. Alerted to Plant’s talent by Terry Reid, Page and Zeppelin manager Peter Grant visit Birmingham to see him sing with a group called Obbstweedle and, suitably impressed, Page invites Plant down to spend a three days with him at his house in Pangbourne.


A few days [after the Obstweedle gig in Birmingham], Robert Plant took up Jimmy’s invitation to visit him in Pangbourne, walking the last mile past elegant houses that bordered the River Thames, the bright blue summer sky reflected in its shimmering surface. The contrast with the noisy, crowded streets of Wolverhampton, with its traffic and multicultural mix of Indian, Pakistani and British families, was profound; this was Middle England at its most charmingly pastoral, the setting for Jerome K. Jerome’s Three Men In A Boat, an idyll where geese sashayed across the water and garden birds twittered in the trees. This was a land where cows munched in fields and rabbits bustled in hedgerows as the endless river flowed gently past pubs with mock Tudor beams and names like The Swan or The Jolly Angler. Sadly, despite its verdant setting and chocolate box scenery, Pangbourne didn’t take well to hippies. Soon after Plant exited the train station, he was scolded by a pensioner about his scruffy appearance. “Desperation scene, man,” he later told writer Simon Godwin, “but I had nowhere else to go.”

Legend has it that Robert brought with him LPs by Robert Johnson, the Incredible String Band, Howlin’ Wolf and Joan Baez, the latter so as to make Jimmy aware of a traditional song he liked called ‘Babe, I’m Gonna Leave You’. Arriving at the house, his knock was answered by Jimmy’s girlfriend. “The door opened and suddenly I saw ‘America’,” he told Nigel Williamson of Uncut in 2005. “There was this beautiful woman clad in a 1920s shawl with the light behind her. She was very charming. Then Jimmy came back from somewhere and I realised that this guy had a lifestyle I could only imagine. He had quietness... a maturity. Then we sat down and talked about music.”
The reality was that by the summer of 1968 Jimmy Page was a sophisticated man of the world, while in comparison Robert Plant was a cultural neophyte. Having travelled far and wide with the Yardbirds, Page had even found time for a solo trip to India, then an exotic location for Westerners. In addition, he had developed a taste for fine art and antiques that cluttered up his Pangbourne home. According to Melody Maker’s Chris Welch, who would visit there to interview Page, the house contained valuable paintings, records, model trains and many books. “A large white telescope has pride of place in the living room,” wrote Welch. “Copies of Man, Myth, and Magic lay around and a huge volume of the works of mystic Aleister Crowley. In one room was a Mutoscope, a hand-cranked seaside peepshow featuring ‘a gentleman’s downfall’, involving a lissome lass wearing not unsexy 1926 underwear and a healthy smile.”
Robert Plant, on the other hand, had travelled not much further than the West Midlands, even if he did resemble a refugee from Haight Ashbury in San Francisco with his gym pumps and snake-hipped bell-bottomed jeans. Still, there were real possibilities here. He was a tall, handsome young man with bushy blond hair that curled over his ears, and a wide, welcoming smile that lit up his friendly face; all assets in a potential vocalist. But Plant was also aware that he had some cultural catching up to do with the more seasoned, urbane Page. “You can smell when people have travelled, had their doors opened a little wider than most, and I could feel that was the deal with Jimmy,” Plant told Williamson. “His ability to absorb things and the way he carried himself was far more cerebral than anything I’d come across. I was very impressed.”
The purpose of the visit, of course, was to share music, establish compatibility within it and, hopefully, establish a friendship, and to this end ‘Babe, I’m Gonna Leave You’ turned out to be the key link. Jimmy, too, loved the song and had intended playing it to Robert, a symbiotic concurrence that helped Robert pass the audition – if that was what it was – with flying colours. “I’m not sure Robert knew much about the Yardbirds but I started playing things like ‘Dazed And Confused’ and ‘Babe, I’m Gonna Leave You’,”[1] said Page. I’m not entirely sure he knew what to make of it all, but he did stick with it…” He was also impressed with Robert’s harmonica playing. “A big plus!”
In real terms, the pair bonding over ‘Babe, I’m Gonna Leave You’ was incredibly important to all future progress. For Jimmy, the song exactly represented all that he wanted to achieve with his new group, its undulating structure providing the opportunity to weave between moments of musical calm and savage bursts of instrumental power (“scream to a sigh and back again,” said one critic). Equally, the song gave Robert a chance to demonstrate both his vocal range and gift for inhabiting a lyric – in this case, switching the protagonist’s gender to add an extra emotional dimension. Consequently, for a short time at least, ‘Babe, I’m Gonna Leave You’ became a pivotal moment in the fledgling band’s live show, its soft/hard qualities counterbalancing their ability to amp it up, as with material such as ‘Communication Breakdown’ and ‘How Many More Times’, or dial it down as with ‘Your Time Is Gonna Come’ and ‘I Can’t Quit You Baby’, but all in the space of just one tune.
At last, Page had found his man. Plant was in.


[1]  In some tellings of the tale, Robert did not arrive at Pangbourne with Joan Baez’s ‘Babe...’ at all, leaving Jimmy to alert the singer to the song. Whatever the case, it remains obvious that Page and Plant’s love for the tune was crucial in taking things forward between them.

Spotted an error already. Charlotte Martin was not introduced to Jimmy Page until the Royal Albert Hall concert in 1970. She could not have been at Pangbourne in 1968.

You are quite correct, and this does not appear in the book. Because extracts sometimes contain things that are unexplained, I often add things, and I erroneously added Charlotte's name here. Thanks for pointing out my error - CC

Where does it say anything about Charlotte Martin? It could be another blond. He had more girls than you could shake a stick at

Where does it say anything about Charlotte Martin? It could be another blond. He had more girls than you could shake a stick at

The passage appears to have been deleted.

I have deleted her name. CC

Right. Must've been Lynn Collins at that time (after he 'stole' her from Steven Tyler when he was just a roadie for another band haha)

Actually, Jimmy meet Charlotte Martin until 1969 at the Royal Albert Hall, so the girl mentioned here must be Jackie DeShannon or idk, but it's not Charlotte

It seems to be spelt both ways. Depends on where you look and who you ask!

Has JP's fondness for the name Scarlet ever been explained?

I know accuracy is important in the retelling of moments such as the seed that became the catalyst for the formation of a legendary rock and roll band that some say was the best ever (I prefer timeless)but surely the music mentioned as a symbiotic event and the meetings success should generate more comment than who answered the door.

Has Jimmy had a part in this book, or approve it?

I seriously doubt it was Jackie DeShannon! She was already engaged when she was fooling around with Jimmy in 1964.

Lynn was a brunette, and Jimmy never brought her to England.

Adverts from the time confirm the spelling was Obstweedle.

Blame Robert Plant. The words as they appear here are almost a verbatim transcription of how he has recalled this occasion.

I'm looking forward to the book! Jimmy seems like such a complex man.Like he seems so mysterious, yet he speaks and acts like such a gentleman.He's a tough one

It's much more of an eulogy than a biography. The author is extremely complimentary of Jimmy's work (how not to be?), perhaps the most among all authors that ever wrote about the man.

I fell that the first chapters (session man time) bring more of Jimmy to the light than the last ones (post Zep phase), regarding to provide some extra insight to the reader.

Jimmy has been always secretive about his personal life and remained so in this work. As his admirer, I'd like to have some perspective on his creative process (e.g., how he turns personal experiences into music) and expected that this book might provide that.

Nonetheless, it's a great work and very pleasant to read, well written and elegant in all aspects. I just hope that someday an author will be able to connect with Jimmy in such a way that he feels compelled to unlock his secrets/deeper insights, and allow us to understand how he lived and perceived himself along his great career.

Ever wanted to get free Google+ Circles?
Did you know you can get these AUTOMATICALLY & TOTALLY FREE by using Like 4 Like?

eToro is the #1 forex broker for new and full-time traders.