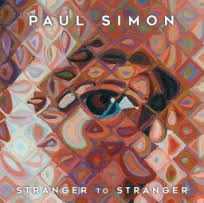 On his recently released album Stranger To Stranger Paul Simon addresses the problem of inequality in a wonderful new song called ‘Wristband’. Set to a brisk tempo, with prominent springy bass, busy percussion and a hint of South America, the song opens as a lament from a performer who has slipped out from the back of a venue for a smoke, only for the stage door to click shut behind him. Realising to his dismay that he isn’t wearing his back stage pass, his wristband, he must gain entry elsewhere, no easy challenge when faced with a 6’ 8’ doorman who doesn’t believe that he’s the leader of the band.

So far so good, but this interesting, potentially comical, scenario is turned on its head in the final verse wherein the wristband of the title becomes an allegory for the disparity of opportunity that plagues life in the USA and, for that matter, the UK as the recent Brexit vote surely indicates. So it comes as a bit of a surprise that instead of concluding the story – whether or not the performer regains entry to the venue – Simon lowers his tone, drops the irony of the earlier verses and cooly shifts his focus to the riots, the homeless and the ‘towns that never get a wristband, kids who can’t afford the cool brand, whose anger is a shorthand for you can’t have a wristband’ and who as a result ‘can’t get through the door’.
Simon rightly thinks highly of this new song for it is included twice on the record, the second time live, slightly sparser, the elastic bass even more prominent. His audience laughs at his predicament, only to be brought down to earth by the third verse and the realisation that there is much more to this song than the droll dilemma of an artist being locked out of his own gig.
‘Wristband’ is unquestionably the highlight of a characteristically thoughtful, well-crafted album by a master of his art who rarely, if ever, disappoints and who, now midway into his seventies, shows no sign whatsoever of flagging or resting of his laurels. He’s still pushing out new sounds and ideas. The first track ‘The Werewolf’ opens with what sounds like a spring being twanged and has a touch of rap about it, and ‘The Clock’, at 1.03 perhaps the shortest tune in Simon’s canon, is a strange, ethereal instrumental set to the ticking of a timepiece.
Elsewhere the album is a judicious blend of the second and third phases of Simon’s career, the first being his period with Art Garfunkel. ‘Street Angel’ and ‘In A Parade’ are both percussive led, ‘Cool Papa Bell’ has the rhythmic pulse of Simon’s South African expedition for Graceland, the title track ‘Stranger To Stranger’ sounds like it could have been recorded for Still Crazy After All These Years, and both ‘Insomniac’s Lullaby’ and ‘Horace And Pete’ see Simon return to his more traditional melodic acoustic style, the notes from his guitar ringing out sharp and clear as spring water. There’s also a couple of brief but lovely guitar instrumentals, ‘In The Garden Of Edie’ and ‘Guitar Piece 3’, and the edition of the album I bought on iTunes also includes a live version of ‘Duncan’, he who in one of Simon’s best ever lines ‘like a dog was befriended’.
I’ve been listening to this record for about three weeks now. Quite simply, it’s another top quality piece of work from a master craftsman.

What do you think of the percussive 'beats' he uses throughout? On the iTunes previews (I have no access to proper hi-fi) they sound tinny and intrusive.
I note the ref to 'busy percussion' and the live version being perhaps superior...