DAVID BOWIE AT THE PROMS 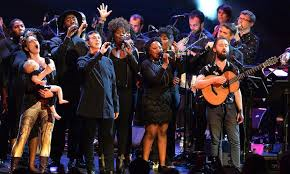 Fitting though it was that David Bowie’s life and music should be honoured at the Proms, I remain unconvinced that rock music played by classically trained musicians is an improvement on guitars, bass and drums played through 100-watt amps by men and women who play gigs and not give recitals. While the enthusiasm, devotion and skills of the Stargaze Ensemble and their leader/conductor André De Ridder could in no way be faulted, these violinists and brass players seemed somehow unable to inject it with anything like the punch that makes rock sell by the bucketload and, conversely, albums of classical music struggle to reach five figures.
On the TV the Royal Albert Hall was dark and gloomy, with Ridder’s announcements formal and painstakingly comprehensive, all of which injected an atmosphere of melancholy worthiness that appeared to me a touch pretentious. The evening opened with ‘Warszawa’, the moody instrumental in an arrangement not unlike Bowie’s original on Low, an appropriate start with its slightly discordant undercurrent and suggestion of impending doom. A xylophone link led to an avant-garde passage that segued into ‘Station To Station’ sung by sober-suited Neil Hannon of Divine Comedy, followed by ‘The Man Who Sold The World’ by an earnest chap with his nylon stringed guitar worn very high, wherein Mick Ronson’s lean guitar lines were adapted for violins and French horn, the whole piece closing with an ethereal choral coda.
‘This Is Not America’, another Hannon vocal, was enlivened by a rap interlude by Elf Kid, a Lewisham grime man. This was followed by Marc Almond’s expressive reading of ‘Life On Mars’, his arms-wide-open dramatics making up for the occasional gratingly off-pitch vocal. He would redeem himself later with ‘Starman’.
This was by no means an all-male affair however. The females in Stargaze assumed the lion’s share of the backing and Anna Calvi (often with Jherek Bischoff on bass), Amanda Palmer (with Fender Telecaster and, at the close, babe in arms) and Laura Mvula (with added soul), all took lead or shared lead vocals as the evening progressed. Mvula’s take on ‘Fame’ finally injected a bit of tempo into the evening as the ensemble achieved the difficult feat of getting foot-tappingly funky with instruments designed for interpreting Mozart and Beethoven.
The Blackstar trilogy of ‘Girl Loves Me’, ‘I Can’t Give Everything Away’ and ‘Blackstar’ itself formed the concert’s poignant centrepiece, Palmer and Calvi topped with what looked like crowns of thorns, the music from Bowie’s final album lending itself perfectly to the evening’s heart-rending mood. After that it was a bit of a relief to recognise Robert Fripp’s sinewy guitar motif of ‘Heroes’ and get back into the groove as the audience got behind Palmer’s rendition of Bowie’s most loved song.
Opera singer Phillipe Jarousky, a counter tenor, surprised us all with his surprising high-pitched vocal on ‘Always Crashing In The Same Car’, and Marc Almond brought back a bit of oomph with ‘Starman’ – at one point he yelled ‘Let’s take it up now’, surely a first at the Proms – and I probably wasn’t alone in wondering if he’d pull off the song’s famous octave leaps. He did, just.
It was left to John Cale to bring the evening to a close. Wearing a calf-length dress of the kind work by middle-aged ladies in drawing room plays, his white hair nicely awry, he was in fine Velvety voice, his version of ‘Valentine’s Day, sounding a bit like Tom Waits, while the full-on arrangement of ‘Sorrow’ – an odd choice though Bowie covered the Mersey’s hit on Pin Ups, of course – made it sound as if a real rock band had stumbled uninvited into the RAH. Cale’s final offering was a rather dirge-like reading of ‘Space Oddity’, his deep Welsh tones lending a degree of gravitas to the song that contrasted with Bowie’s more vulnerable interpretation of the plight of Major Tom.
To close the evening Marc Almond led the ensemble through ‘After All’, and finally the Stargaze players took over for an instrumental version of ‘Let’s Dance’ for which the audience, clearly delighted by what they had seen and head, contributed vocals.
I can’t help wondering what David would have made of it, though. Flattered maybe, but probably disappointed that no one who’d actually worked with him – Eno maybe – hadn’t taken part, and bemused by its earnestness. Six and a half out of ten.


(The photograph was taken from the web, credited to The Guardian)

You are way too generous...