THE OX – An On The Spot Report 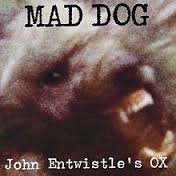 On Sunday December 8 1974 I was at the City Hall in Newcastle-upon-Tyne to watch the debut performance by John Entwistle’s Ox, reporting on the show for Melody Maker. Here’s what appeared in the December 14 issue of MM under the headline: ENTWISTLE’S £25,000 HOBBY.


“This has cost a bomb so a few more quid won’t make any difference,” murmured John Entwistle as he signed a bar bill for slightly over £8 at the Five Bridges Hotel, Gateshead, on Sunday evening. “I Mean… what’s money for. You can’t take it with you so I might as well spend it while I can.”
Entwistle’s money is currently being spent on his latest passion, The Ox. Apart from being his nickname, The Ox is a rock’n’roll band of four, augmented by a saxophone player and two girl singers, who made their public debut in front of a sparse audience at Newcastle City Hall a few hours before John signed that bar bill and threw back several large brandies.
About 300 tickets were sold for the event which is one of three warm-up gigs planned this year. Next January they’re embarking on a 14-date British tour, mostly universities, and in February – all being well – they’re off to America where demand for Entwistle and his music is greater than in his home country.
The fact that so few people bought tickers for his opening show didn’t appear to worry John in the slightest. In fact, he seemed surprised that 300 people had bothered to cough up £1.25. The Ox is, in fact, a very expensive hobby. How much? “Oh, I dunno. About twenty-five grand,” said John
As a band, they’re pretty hot though a few rough edges need straightening out, and something has got to be done with the volume. For some reason, John chose to completely shatter his audience with the loudest music I’ve heard since Slade played Earls Court.
They were certainly a lot louder than The Who, a fact confirmed by sound man Bob Pridden, The Who’s regular sound mixer who’s just finished a sting with Eric Clapton. Bob’s one of the best in the business, and when he grimaces over the volume, then something is very wrong. Actually, John chose to use most of The Who’s equipment and most of their crew for the show.
The smallish city hall stage contained enough gear to equip several bands. “Next gig I’m gonna leave some of them speakers behind,” said Bob. “It’s bleedin’ daft. I’ve been arguing with him all week over the bleedin’ gear. There’s enough stuff for a band to play an open-air gig in Hyde Park and be ‘eard in ‘Ounslow.”
The Ox played for just over one hour and their material was a mixture of tracks from Entwistle’s solo albums, including one by The Ox due for release shortly, and the and guitarist Robert Johnson began the show by cracking out the chords for ‘I Can’t Explain’. Other Who songs featured were ‘Boris The Spider’, Whiskey Man’ and ‘Cousin Kevin’. They’re rehearsed ‘Heaven And Hell’ but didn’t play it as John completely forgot.
It doesn’t take much to realise that John is an old rocker at heart. The set was liberally spiced with some beefy rock and roll, and he encored (yes, the 300 demanded an encore) with Cochran’s ‘Something Else’ and Little Richard’s ‘Keep A Knockin’’.
One of the new songs was called ‘Cell No 7’, apparently written on the occasion when The Who were arrested in Montreal following a hotel fracas.
The bass was turned up throughout and if the band does nothing else it enabled John to show off his bass technique splendidly. He really is one of the best bass players in the business. His runs are often stunning and his finger plucking technique is quite breathtaking, unbelievably fast. His lines ripple out like machine-gun bullets and, at the volume he chose to use, have an odd effect on an audience. Shell shock, I guess.
Robert Johnson is a good guitarist too, but he was frequently lost in the mix. I kept waiting for him to spin his arm around, but he didn’t. The band doesn’t really need a drummer – Entwistle’s bass is a one-man rhythm section – but Graham Deacon fought manfully on, often unheard.
The Who numbers went down the best, but requests for ‘Postcard’ went ignored. They did a knockout version of ‘Not Fade Away’, and a curious instrumental called ‘Jungle Bunny’ which featured backing tapes and appeared to come unstuck towards the end. It was a dull tune anyway.


‘Cousin Kevin’ – with girl singers – was a highlight, but ‘Whiskey Man’ didn’t come off as well as it could have done. John is best doing straight rock and roll: his grating voice suits the classic 12-bar structure. He’d make a suitable replacement in The Wild Angels or their ilk anytime.
I think they were a little under-rehearsed. In the bar of the hotel before the gig the saxophone player was busy copying down chords on scraps of paper. “Just to make sure,” he said after thanking me for a mention in the Raver* column several years ago when his horn was pinched.
I enjoyed myself and I think everyone else did, not least the fetching Miss Doreen Chanter (one of the two chick singers) who attracted much attention back at the hotel. Her sister Irene went to bed early as she had a session at Trident Studios in London the following day.
One more point: it was refreshing that John laid himself open in such an unpretentious fashion. None of that bleating about keeping the press away from the opening concert from The Ox, and all power to him for it.


* This was Melody Maker’s gossip column but we often did musicians a favour by using it to try and trace stolen gear.
Posted by Chris Charlesworth

If you're trying to buy bitcoins online, Paxful is the ultimate source for bitcoins as it allows buying bitcoins by 100's of different payment methods, such as MoneyGram, Western Union, PayPal, Visa, MasterCard, American Express and even converting your gift cards for bitcoins.

Did you consider exchanging with the most recommended Bitcoin exchange service: YoBit.

Ever try to maximize your free BTC collections with a BTC FAUCET ROTATOR?

YoBit lets you to claim FREE CRYPTO-COINS from over 100 distinct crypto-currencies, you complete a captcha one time and claim as many as coins you need from the available offers.

After you make about 20-30 claims, you complete the captcha and keep claiming.

You can press CLAIM as many times as 50 times per one captcha.

The coins will held in your account, and you can exchange them to Bitcoins or any other currency you want.

Join millions who have already discovered easier methods for investing in Ripple...

Learn from experienced eToro traders or copy their trades automatically