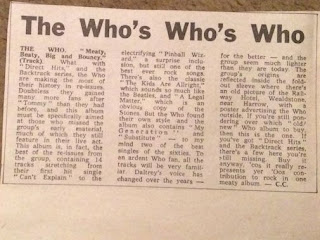 I grew up with it but don't we now, with the advancement of years and cultivating of (inevitably) more sophisticated ears, that the sonically shitty electronically reprocessed stereo mixes on Meaty B fuck with impact of the original incarnations ?

That review is way too much. In current terms a complete 1971 MM is about 1.37GBP. Maybe Townsend or Daltrey will buy it.