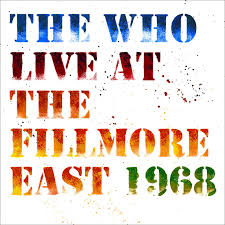 Superb review from someone who thoroughly understands The Who.I was lucky enough to see them on this tour a few days before they played the Fillmore.

Excellent review, absolutely love the album for anyone who is a completist, this is an essential record to have.

I was hoping you'd chime in! I still wonder how Roger kept himself busy during Relax and My Generation. Here's my take:
http://everybodysdummy.blogspot.com/2018/04/who-27-fillmore-east.html

Probably smashed up a couple of tambourines then buggered off for a cuppa tea..

Excellent review!
Bravo. A beautiful tribute to one of Rock n Roll’s most important band.

Thanks for that. CC

A great review of a great release.

(One quibble...if I'm reading you correctly, you're inferring that Cream were formed for the purpose of playing long concerts, which isn't quite the case. They stretched out for much the same reasons the Who did...to fill up the longer shows they were expecting to play. And unlike the Who, Cream had a paucity of original material to choose from at the beginning!)

I was implying that Cream were assembled (in 1966) by three experienced and skilled musicians to enter a field that they knew would be supportive of the music they wanted to play. The Who, three of whom assembled as inexperienced and unskilled musicians (in 1962), developed organically without knowing what the future would bring. Perhaps I could have phrased this better. Thanks. CC

I was fortunate enough to see them on their second night at the Marquee following their return from the States after this show, on 23rd April 1968, when they played, to the very best of my recollection, all of the songs recorded here except Little Billy, C'mon everybody and My way. This was the first time I'd seen The Who live.

The set I saw included Substitute and Pictures of Lily, and a new song which they started the show with, Heaven & Hell.

To say this first show was astounding is to understate what I saw.

They were magnificent. Loud beyond belief, easy banter with the audience, and in my opinion they were more than pretty good musicians.

I don't recall now if they played Relax and My Generation for as long as they did at the Fillmore, but this CD is, as far as I am concerned, the closest I'll get to what I heard in the Marquee just 18 days later.