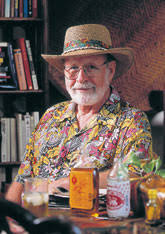 My writer friend Jerry Hopkins, who died at the weekend aged 82, was a grizzled old veteran of rock’s seminal years. Not for him the modern day skimming blandly across the surface and kowtowing to PRs whose clients demand a positive spin, vet the questions and require copy approval. No, Jerry was a man who believed in getting down to the nitty-gritty and if the subject of his interest complained, well fuck ’em. By the time all that shit happened Jerry was long gone anyway, settled in Bangkok with a Thai wife and a wardrobe full of colourful open-necked shirts, writing about Asian aphrodisiacs and transvestite hookers instead of pampered rock stars.
At the time of his death Jerry was working on his memoirs, Sex, Drugs, Rock & Roll & Sweet Jasmine Rice, which he summarised for a friend of mine, Chicago-based writer Patricia Butler, author of the book Angels Dance and Angels Die: The Tragic Romance of Pamela and Jim Morrison, published by Omnibus Press after we bought out the original US publishers. Jerry’s summary was as follows: “How a small town American Quaker boy met a two-headed cow & a hermaphrodite, served as Steve Allen’s ‘kook-booker’, helped invent & chronicle the 1960s (opening LA’s 1st head shop, nation’s 3rd), wrote the 1st Elvis & Jim Morrison books, others about Jimi, Bowie, Yoko & Raquel, for 20 years reported for Rolling Stone, introduced Lenny Bruce to Groucho Marx, married four times, went bankrupt once, made a paté from his son’s placenta & ate insects & pets & drank ‘five-penis wine’, refused to own a cell phone or credit card, fell in love with a Hawaiian ladyboy, became a sexpatriate in Bangkok, & finally settled down on a farm where the water buffalo roam & the skies are not cloudy all day.”
Well, I’ll try and follow that before handing the baton back to Patricia.
Jerry’s doorstopper Elvis book, published in 1971, was only the second rock biography I ever read, after Hunter Davies’ Beatles book. Rigorously researched despite the initial hostility of Col Tom Parker, Presley’s manager, it was the first significant book about Elvis and a milestone in rock writing. I read it in 1973, in Los Angeles, and it inspired me to write to Parker requesting an interview with his client. Parker never replied. 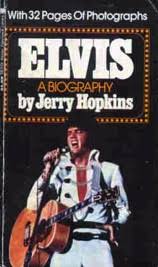 I was pleased to be able to get the rights to Jerry’s second Elvis book, The Final Years, for Omnibus Press, and I tried to get his Jim Morrison/Doors book too but we were unable to wrest it from the existing publishers. This was the celebrated No One Here Gets Out Alive, co-written with Doors insider Danny Sugerman and first published in 1980, and it was the basis for Oliver Stone’s 1991 film about Morrison and the group. It became a best-seller, probably one of the best-selling rock books ever, and after Danny died in 2005 Jerry wanted to revise and update it for an e-book edition. This was blocked by The Doors themselves, or at least some of them or their lawyers, on the grounds that it contained lyrics that they controlled, and they somehow exerted their influence over Danny’s widow Fawn Hall – the same Fawn Hall who was secretary to Lt Col Oliver North, the villain of the Iran-Contra affair – who’d inherited Danny’s rights in the book.
Of course, there was far more to it than simply the lyrics. The surviving Doors had been shown a copy of Jerry’s update which reflected badly on them re their behaviour after Jim’s death, most notably Ray Manzarek wanting to grant permission for their songs to be used in commercials. This smacked of greed and, as Jerry well knew, was something that Jim Morrison had explicitly vetoed while he was alive. So they canned it.
By this time I’d met Jerry once or twice in London, here to promote subsequent books he wrote, and we got on well. He was very funny, not one to mince his words about the characters he’d written about, a refreshing change from many Americans I’d met over the years. I detected a reckless spirit of adventure in him, and we stayed in touch. We corresponded well into the early 2000s, but I baulked at publishing the books he wrote about sex in the orient. Not really Omnibus material, I wrote. He understood. 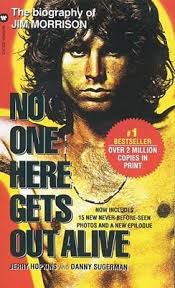 It was through this correspondence that I learned about his situation with The Doors and No One Here Gets Out Alive. In the event, in 2013 Jerry privately published a kindle-only book called Behind Closed Doors, cheekily trailered on the cover as ‘the book the Doors don’t want you to read’ in which he explained the circumstances surrounding the affair. Many onlookers, including this writer, took the view that his and Danny’s book was in many ways responsible for the regeneration of the Doors’ back catalogue in the early eighties, the renaissance that inspired the Rolling Stone headline “He’s Hot, He’s Sexy and He’s Dead” over one of those famous pictures of Jim taken by Joel Brodsky. This newfound popularity massively enriched the surviving Doors, of course, not to mention the Morrison family, and in view of this I felt they owed Jerry a lot more than a pat on the back. Instead they dumped on him.
It really all began for Jerry in 1968 when, after a spell in the army and working in TV, he was managing LA’s first head shop, where early copies of Rolling Stone were sold. Responding to an entreaty in its columns, he sent in a review of the Doors at the Cheetah Club in Santa Monica that RS published. Editor Jann Wenner, who henceforth crashed on Jerry’s couch whenever he was in LA, offered him a job, and he soon became a mainstay on the magazine. His hilarious December 1972 interview with Keith Moon became the basis for many of the myths that grew up around Keith for the remainder of his life and beyond.
Jerry went on to write more rock biogs, on Bowie, Hendrix and Yoko, but his name would forever be associated with Elvis and Jim Morrison. “Morrison was the most interesting of all the rock stars I met because he was the best conversationalist,” he said in 2013. “Something I always had trouble with at Rolling Stone was that I was interviewing people whose avenue of communication was singing or playing an instrument. Why should anyone expect them to have a political opinion worth listening to? Most of them didn't, but Morrison was interesting on a totally different level.”
In the 1980s Jerry moved to Honolulu, where he wrote about Hawaiian culture, and in 1993 further across the globe to Thailand where he continued to write about travel, food and local culture. By the end of his life he had written 40 books and over 1,000 magazine articles.
He was also helpful to other writers, among them Patricia Butler – he wrote the foreword to her Angels Dance, Angels Die book – and they became good pals, also pen-pals, so I asked her if she had anything to add to anything I might write. “He was hit by a car once,” she wrote to me, “and he told me that when he woke up, face down on the pavement, he was hearing The Doors’ ‘Roadhouse Blues’ in his head: ‘The future's uncertain and the end is always near’, and he made up his mind right then that he was going to follow his bliss, which ultimately ended up taking him to Thailand and the adventure of his life. Sometimes those adventures were hard for me to take. When he first moved to Thailand, he used to send me long, detailed journal entries of what he was getting up to. At one point I asked him to stop, just because some of the things he was doing were so reckless and outlandish that it made me queasy. But that was Jerry. There are so many stories – he lived so many stories – but they’re really all just one story: the future’s uncertain and the end is always near, so let it roll, baby, roll, all night long. The inscription Jim Morrison's father put on his son's headstone – true to his own spirit – is really Jerry’s epitaph, too.
“When we first became friends, when he was still living in Hawaii, he used to like to fax me drawings of his penis. This was back in the day when you’d have a continuous roll of thermal fax paper. He’d send me a penis with a ribbon on it, or a top hat, or a very detailed cross-section. One night – I seem to remember it was like three in the morning or something – my fax machine, which was in my bedroom, kicked on. I heard the paper coming through, but instead of stopping and cutting where a normal page would end, it just kept coming through. I got up and looked and this nut had sent me through a penis drawing about eight feet long, continuously rolling out of the machine. The man knew how to commit.”
Jerry stayed in Bangkok or on a farm near the Cambodian border until his death, always speaking openly about his encounters with transgender prostitutes. “There's a whiff of danger about Bangkok,” he said in 2013. “I hate to romanticize dirt, but we're talking whores and drugs and the fun things in life.”
Jerry was married four times, had two children, and is survived by a son and daughter, eight grandchildren and Lamyai, whom he married in 2003.