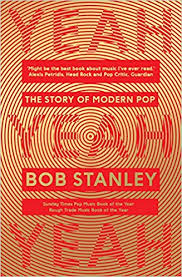 In noting the death of my old friend Jerry Hopkins two weeks ago I mentioned that Jerry’s biography of Elvis, published in 1971, was the second rock book I ever read, after Hunter Davies’ Beatles book. The third was Rock From The Beginning, aka Awopbopaloobop Alopbamboom, by Nik Cohn with whom I became friendly when I lived in New York. Like his books, Nik was loquacious, confrontational and great company, and also slightly unnerving to be around. He didn’t hesitate to snort up cocaine from tables in restaurants and I still recall watching aghast as he was thrown out bodily from a party hosted by Atlantic Records to celebrate the success of the Bee Gees’ Saturday Night Fever, his crime a witheringly merciless putdown of the Rolling Stones in New York magazine. There was also an unpleasant altercation at a Stevie Wonder ‘listening’ event in a recording studio where, at Nik's suggestion, he and I opted to play pool instead of joining in with everyone else sitting immobile while all four sides of Songs In The Key Of Life were played at deafening volume.
All of this came back to me as I recently read Yeah Yeah Yeah by Bob Stanley, published in 2013, which I came to a bit late. A work of enormous scholarship, as readable as it is informative, it is without doubt the grown-up son of Nik’s book, perhaps a shade less provocative with more attention to detail than outright judgement, but Stanley’s style is very similar to Cohen’s – free flowing and wonderfully descriptive with the odd throwaway gem of fascinating trivia and reference to some obscure but brilliant record – and the subject matter is the same, of course, albeit in Yeah Yeah Yeah’s case much updated and far more comprehensive. The comparison is meant as a compliment.
Subtitled The Story Of Modern Pop, Stanley’s book takes as its starting point the first ever UK singles chart, as published in NME on November 14, 1952, thus skipping over the earliest years of recorded music that Peter Doggett covered in his similarly ambitious (and similar-sized) book Electric Shock. It ends around the turn of the century, when ‘modern pop’ succumbs to the digital era, singles sales fall dramatically, the charts cease to be relevant and the music press, no longer influential, caves in to competition from the internet. Like Doggett, Stanley is so displeased by subsequent developments as to ignore them completely.
Yeah Yeah Yeah is less academic and more playful than Electric Shock. Who else, for example, has noted the similarity between Hendrix’s ‘Third Stone From The Sun’ and the theme from Coronation Street? He’s no snob, championing unfashionable acts like The Sweet and The Bee Gees who, along with Abba, get a chapter of their own, unlike heavyweights Led Zeppelin, U2 and Bruce Springsteen. Spector shares one with Joe Meek, a shrewd pairing, Bowie with Bolan, which might have vexed The Dame were he around today, and Prince with Madonna, all their accomplishments neatly summarised and placed into historical context. Footnotes often draw attention to links between eras, many of them surprising but always insightful, chapters often begin or include lists of best-selling records to illustrate where pop is at, as do illustrations at the beginning of each, and I was impressed that every time a single, successful or otherwise, is mentioned it is followed in brackets by its chart position in both the UK and US. It is, after all, the story of modern pop, not rock.
I preferred Yeah Yeah Yeah’s early chapters, the investigations into rock and pop’s past, boogie-woogie and skiffle, and from the tone of the text I suspect the author enjoyed writing these more too. I was a bit surprised that Stanley didn’t dwell on attempts by the music establishment – the BBC, record companies and (shamefully) Melody Maker – to suppress American rock'n'roll, which as Pete Frame points out in The Restless Generation, his book about pre-Beatles UK rock, was like King Canute and the tide. Once we get into the eras with which I am more familiar, there are fewer surprises though Stanley is terrific at terse descriptions: Neil Young, ‘peeking out from beneath curtain hair like a cross between a startled deer and an eagle-eyed Action Man’; Elvis Costello ‘[wearing] a surgically enhanced eyebrow and [writing] pun-packed songs while singing as if he was standing in a fridge’; Madonna ‘like Margaret Thatcher who, as prime minister, never allowed another woman into her cabinet, [she] acted as if she was the only woman allowed in pop.’
Bob Stanley is one-third of the immensely likeable indie-dance group Saint Etienne and there are photographs of him on line standing in front of his record collection, 20,000 LPs or more. Yeah Yeah Yeah is ample proof that he’s listened to every one, even the prog rock and heavy metal, both of which he dissects, albeit with less enthusiasm than Brill Building pop, the Beat Boom, Glam and what he calls New Pop in the eighties. This was another aspect of his book that reminded me of Nik Cohn’s thesis in Rock From The Beginning: that sinking feeling that the best is past.
By the way, you will be pleased to know that the name Cowell does not appear in the index. Highly recommended.

Great review (as ever), Chris, of a similarly great book. I bought it on Kindle and was glad I did - it's the kind of book that can be endlessly reread, dipped into, and which never ceases to please. There's also a 2,713 song Spotify playlist put together by someone called unterwasser which is well worth checking out and can be found here. https://open.spotify.com/user/unterwasser/playlist/6Yn3GrP6D6dOSfKFfpzAiC

There's a chance you're qualified to get a $350 Ikea Gift Card.