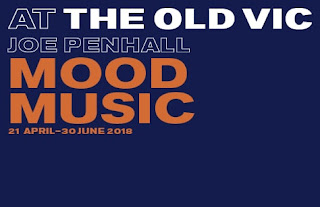 Mood Music is a play about the music industry, specifically the abuse of power that enables an established, controlling figure to benefit from the creativity of an artist with less experience and clout. Not, you might think, an obvious subject to tackle on the theatre stage, but writer Joe Penhall has some previous in the Tin Pan Alley literary trade having, according to the programme notes, worked as a music journalist and also collaborated with Ray Davies on the book for Sunny Afternoon, the hugely enjoyable Kinks’ jukebox musical reviewed here: http://justbackdated.blogspot.com/2015/05/sunny-afternoon-kinks-musical.html
The protagonists in Mood Music are Cat (Seána Kerslake), a twenty-something Dublin-born singer songwriter, and Bernard (Ben Chaplin), her older producer-cum-manager who has taken control of her career following the success of a single that Cat wrote and Bernard embellished. Credit is thus shared but Cat is increasingly unwilling to accept Bernard’s gratuitous stance with regard to her work. The dispute over ownership escalates into a legal battle as their lawyers argue the toss and descends into mind games as their therapists probe into their pasts and expose secrets that might explain their combative behaviour.
Written in a sort of time-switch style wherein conversations take place out of strict chronological order and, slightly confusingly, between cast members while others are within earshot but obviously not listening, the play takes a little while to settle down. In the meantime, while the audience is becoming accustomed to the quirky way in which the plot develops, we sympathise with the girl, the victim, and rail against the producer, the bullying oppressor. But there’s more to it than simple good versus evil, as the psychoanalysts discover when both Cat and Bernard discuss their dysfunctional upbringings, giving her a taste for booze and him an ego half a mile wide.
The action takes place in a recording studio, with guitars, a keyboard, an amp and drums at the ready. We see Cat present a song on guitar that Bernard subtly revises with piano chords that she doesn’t much like. “You’ve made it sound like Elton John,” she says at one point, and that’s not a compliment. Bernard is seeking to commercialise her work, which is what their record company want and pay him for; Cat is seeking something a bit more out there, disjointed, independent and cutting edge. The dilemma is unresolved. 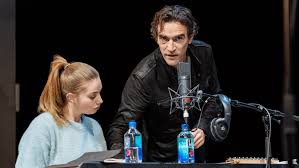 Seána Kerslake as Cat and Ben Chaplin as Bernard

Points are made about how the music industry treats women – it is suggested that Cat was transported from gig to gig in a near catatonic state – and how damaged individuals often create the best art. At one point, Bernard states that Lennon and McCartney wrote ‘I Want To Hold Your Hand’ for the mothers they lost as teenagers, a contention I’d contest but it’s probably included to make the point about how the past shapes the present. In another scene Bernard’s arrogance takes centre stage when the song in question wins an Ivor Novello award – he grabs the attention, making a predictably insincere speech and forcing Cat into a subservient role, and afterwards proselytises about how little the award really means to him. It made me hate him even more.
While the lawyers make claims and counter-claims the relationship between Cat and Bernard deteriorates. Eventually they reach an agreement wherein Bernard will concede his rights in Cat’s work if she agrees not to pursue claims about unseemly behaviour on tour, but just as it looks as if the play will end with both parties going their own way, albeit grudgingly, Cat tears up the contract and the curtain falls. So we never find out what happens in the end.
Ben Chaplin makes a terrific villain, a male chauvinist and a tyrant but also a rather pathetic figure who knows deep inside – but refuses to admit – that he needs to step aside and let youth take over. Seána Kerslake’s Cat is almost as successful as the put-upon singer, desperate to realise the dreams she’s nursed since her musician father, now deceased, set her on to the road to becoming a musician herself. The other four cast members – two lawyers and two analysts – add a touch of humour and depth to the plot. In some respects the play casts welcome light on the oft-quoted truism ‘where’s there’s a hit there’s a writ’ and I can certainly recommend it to anyone with more than a passing interest in the music industry; an unflinching look the dirty side of our industry of human happiness.
At the Old Vic, London, until 16 June.