SLAYED BY SLADE – MY EARLY YEARS 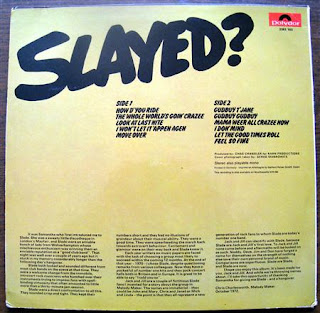 Brilliant story and recollections, Chris and thanks for sharing it over on the Slade FB group!
;-)

Great days Chris - remember everything well - and a great set of blokes to work with - taking them away from me to Les Perrin and trying to break them in America was Chas's and, to some degree, Slade's downfall!

I think I saw them a dozen times in 1971, all over the place. I'm still very friendly with Jim. We talk on the phone a lot, but before I retired we'd have lunch 2/3 times a year when he came down and stayed at his flat near Marble Arch.

Vinyl Revival and the Shops That Made it Happen said...

Just to mention that Chas left it to me, as PR, to organise the public side of the Command Studios 'live' gig - I also ran the competition for the cover and had a hand in picking the winner - that album is the only one on which I have ever had a name-check!

On the inside cover of the LP, in the first column, is the name Leon Hickman of the Bradford Telegraph. It was Leon and me who, in 1968, persuaded the editor of the paper to have a weekly page covering pop music, written by the pair of us. He was more senior than me and took the initiative in this so it could be said that he introduced me to the life I've led since 1970. I have no idea where he is now but I'm reminded of that every time I see the cover. A Leo Hickman used to write for the Guardian and I often wondered whether it was his son.