THE AGE OF ANXIETY – by Pete Townshend 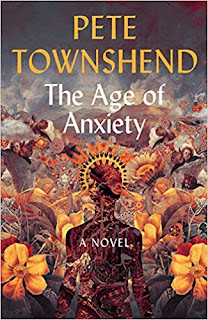 I’m not in the habit of reviewing fiction on Just Backdated but I’ll make an exception with this one for obvious reasons. No stranger to the written word, in 1985 Townshend released a slim volume of his short stories under title Horse’s Neck, and in 2012 there was his autobiography, Who I Am, which followed a book on Tommy he co-authored in 1997. He’s contributed to many more, written sleeve notes[1] and magazine articles galore, probably more than any other rock performer of his stature, and I was delighted when he wrote a preface for Tommy At 50, which I co-authored with Mike McInnerney for publication in May of this year.
And now, in a tradition established by Nick Cave and Morrissey, Townshend has written a full-length novel, described by its publisher as ‘an extended meditation of the manic genius and the dark art of creativity’. But do not let this rather grandiloquent bit of blurb lead you into thinking the book is a hard-going literary slog. On the contrary, it’s quite a page turner, especially in the final stretch when secrets alluded to earlier are revealed and characters must face the consequences of their actions.
Astute readers would have detected all sorts of oblique Who references in Horse’s Neck and it will come as no surprise that The Age Of Anxiety draws on Townshend’s life and career. The novel is set in the world of modern music where drug taking, promiscuity and internal band rows, often stemming from inflated egos, are rife. In this respect, it’s an inside look into the mind of a creative musician and how others in his life, not least the women that surround him, impact on the decisions he makes.
Without giving too much away, Walter is a young rock singer who, aspiring to inject deeper meaning into his work, seeks the advice of an older rock star, Paul, who has opted for the life of a hermit in the Lake District. Paul tells Walter to step back, and the resulting vacuum creates a set of circumstances a bit like Syd Barrett’s withdrawal from Pink Floyd. Nothing feeds myths and legends better than renunciation of all that is worldly in the rock’n’roll business.
All this is told from the point of view of the narrator, Louis, an art dealer whose extended family and social circle includes both Walter and Paul, and also some strong female characters – two sexy Irish sisters and their equally sexy friend Florence, nicknamed Floss[2]. All are portrayed as beautiful and a bit mysterious, with artistic backgrounds steeped in enigmatic ambiguity that demands an explanation.
The sisters, Siobhan and Selena, together with Floss, are all involved romantically with the musicians in one way or another, as is the narrator and his estranged wife, and while there’s a hint of soap opera to all this bedroom activity, Townshend’s literary skills, his attention to detail and the often amusing dialogue keep the plot moving and the book from descending into an airport romance. Vivid descriptions of hallucinations and ear-splitting sounds regularly punctuate the text, all of which reminded me of the racket that The Who once made at the end of their shows, especially when their guitarist felt his equipment would benefit from a good hammering.
There’s allusions to the rock star’s dilemma at various points, with the book promoting the viewpoint that the burden of celebrity is only partially balanced by the rewards it brings. When Walter says he feels a connection with the people down the front, I was reminded of how Townshend once said his worst nightmare was to be playing the same songs to the same people night after night. Another character, the die-hard purist in Walter’s band, says: “We aren’t the fucking Who. We don’t fucking sell out.” I couldn’t work out whether this was an allusion to the Who album of that name, or the ongoing debate about whether the group in its current configuration was entitled to call itself The Who or not. Either way, it reflects the author’s sense of humour.
Various plot lines involving musical ambition, romantic attachments and the need to resolve questions of parenthood all coalesce in the closing chapters when most of the characters gather for Walter’s band’s big concert in Hyde Park. There’s a twist or two in the tale towards the end, an unlikely, unexpected coincidence, and the build-up to the denouement is skilfully wrought, so much so that I was genuinely unable to put the book down as I raced through the final pages.
The Age Of Anxiety, an unusually appropriate title in the present unsettled political climate, is more than just a novel. It has been conceived as a musical work, with 40 songs already composed, and the film rights have already been sold. If part one of this project, the novel, is anything to go by, Townshend – an artist whose ambition really does seem boundless – has another winner on his hands.

[1] Unless I’m mistaken the first text that Townshend published was his Melody Maker column which ran from August 1970 to April 1971.

[2] Townshend followers will recognise this as the name of an ongoing project to which he has been alluding for several years, so The Age of Anxiety is actually Floss with a new name.

Email ThisBlogThis!Share to TwitterShare to FacebookShare to Pinterest
Labels: Book Reviews, The Who (Pete)

Unless someone knows an earlier instance, Pete's first published writings were "The Pete Townshend Page" 22 Aug. 1970 through 17 Apr. 1971 in Melody Maker.

You are correct. My mistake, and a silly one at that considering I worked for MM at the time. I have amended it. Thanks. CC

I read it this weekend, and while yes, it was page-turning, it was also frustrating. The extended "hallucination" paragraphs were distracting, and with more than one unreliable narrator, I'm not entirely sure I know what actually happened.

That said, I think I will read it again to see if I get it better. And I can't imagine how this will possibly be staged for real.

Yeah I agree with your verdict, found the story riveting towards the end of the book, but a lot going on and the soundscapes distracting, think it will become more cohesive with a second read