THE PRETENDERS’ GET CLOSE – My First CD 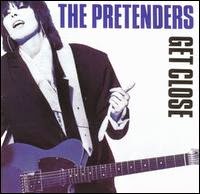 Writing about Chrissie Hynde yesterday reminds me that Get Close, the Pretenders’ 1986 album, was the first CD I ever bought. The reason for this was that at Christmas that year my sister, bless her, bought me my first CD player, a Sony portable device about five inches square that could either be plugged into the mains and played through an amplifier and speakers or used as a CD Walkman so long as you remembered to charge the removable battery.
I was in Skipton that Christmas, staying with my dad, and I owned no CDs of course, so come the day after Boxing Day, I visited Philips electrical store in order to browse what they had, which wasn’t much. Wanting to avoid duplicating what I had on vinyl – that would come later, and how! – I opted for Get Close and haven’t regretted it as I came to love this album, well most of it, by and large the more melodic tracks like ‘When I Change My Life’, ‘Tradition Of Love’ and ‘Hymn To Her’. The rhythmic experiments like ‘Dance’ and ‘How Much Did You Get For Your Soul’ were a bit overwrought for my taste but there’s a great stab at ‘Room Full Of Mirrors’, the Hendrix song and, of course, one of the group’s catchiest hits in ‘Don’t Get Me Wrong’. Last but by no means least there’s ‘I Remember You’, at 2.35 perhaps the shortest track the group ever recorded, and for my money a hidden gem in The Pretenders’ catalogue.
With a hint of reggae to bolster its lilting melody and more than a touch of regret in her voice, Hynde sings of a fondly remembered love affair that somehow went off the rails after a typically promising and probably passionate start. The truth is I couldn’t help identifying all too closely with this song as that October I’d found myself in a similar situation, the object of my desire an unmarried mother who became torn between me and the father of her infant daughter with whom she lived. In the end, sensibly, she chose him but not before we’d enjoyed two months of frantic trysts, a measure of bliss, our transgressions adding immeasurably to the affair’s piquancy.
Back in London after Christmas, the affair over, I played Get Close, my only CD, a lot and whenever this song came around the lyrics to ‘I Remember You’ – especially the couplet ‘I thought you'd never go. It shows you what I know’ – brought back all that had passed. It still gets to me every time I hear it.
For the record, the first time I saw The Pretenders was in 1979 or ’80 at the The Railway on the corner of Broadhurst Gardens and West End Lane in West Hampstead, the upstairs room of which was a noted music venue called Klooks Kleek back in the sixties. I’ve met Chrissie Hynde once or twice over the years, at first in connection with an autobiography for which I was asked to recommend a ghost-writer, an odd request I thought since Hynde cut her teeth writing for NME in the mid-seventies and is a writer of no mean skill. Either way, the book never happened. However, the very first time I met her, my opening words were: “Chrissie, before I say anything else I want to say that the guitar solo in ‘Kid’, played by James Honeyman-Scott, is simply the best, one of the greatest guitar solos ever. That harmonic at the end is as perfect as it gets.”
Chrissie smiled. “Yes, Jimmy did good didn’t he?”
Check it out.
Posted by Chris Charlesworth

So you're the guy that liked that album! I always wondered.

That said, the loss of James Honeyman-Scott can never be measured. Wonderful guitarist. Great shirts, too.

I got my first CD player on the same date as you. I suppose maybe many of us did. I went the following day to my local Specs Music store, a now defunct record chain in Florida and took a look at their inventory. The selection was mostly classical music, with a rather small selection of other music. I chose as my first ever CD, the Boston debut album and followed up the same day with the soundtrack to Star Wars. Fun to recall those memories.

Start following our signals NOW and profit up to 270% per day.

It's been said that every bettor must watch this,

Watch this now or stop placing bets on sports...