As well as The Who book reviewed yesterday, this was the other one that Just Backdated read while on holiday in Spain. 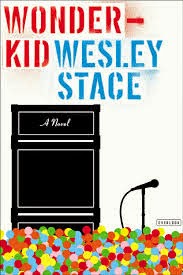 With over a dozen albums under his belt, gigs that include opening slots for Springsteen and R.E.M., not to mention three full length works of fiction, Wesley Stace – aka the singer/songwriter John Wesley Harding – is better placed than most to write a novel set inside the rock world. It shows too, for Wonderkid – a sort of rise and fall of a curiously whimsical English rock hero – is chock full of references that could only have come from the mind of a writer with inside knowledge, not just of the nuts and bolts of the music industry but also one with a keen knowledge of rock history, an anorak who can tell you the B-sides of all the Stones’ early singles (in chronological order), the string gauges of George Harrison’s guitars (Gretsch and 12-string Rickenbacker) and where Bob Dylan bought the sun glasses he was never seen without in Dont Look Back (without, of course, an apostrophe).
In truth, there is no precedent for Blake Lear and his group The Wonderkids. They are British and include Blake’s brother Jack and two others who are jettisoned, along with their first manager, when they get to America and come under the influence of a US major label that markets them as ‘rock for kids’ with a foxy girl bassist and a benign but dreadlocked black drummer. Blake, though, has other ideas and as the novel progresses he gradually subverts the label’s plans by behaving in a manner that upsets just about everyone around him until the whole charade explodes with an almighty bang and he… well, I don’t want to spoil things but there is a neat twist in the tail, a phrase that sounds remarkably like the sort of songs he writes, the lyrics of which are helpfully included in an appendix and some of which Wes has recorded.
Droll allusions to actual rock events will bring forth a knowing smile from veterans like me and, cleverly, each chapter is named after a genuine rock quote from a well-known live album. Along the way there are plenty of laughs but in amongst the humour and set-pieces are home truths about the fickleness of fame, finely wrought character studies of American music biz professionals – a fairly odious bunch of course – and the temptations on offer to offset the tediousness of the road. The problems arise because The Wonderkids are adults but they’re playing to pre-teens, not so much in a cheesy Osmonds-like fashion but as a kind of junior Monkees-style group, sold as ‘Your First Rock Band’ – like ‘Your First Construction Kit’ – and they are instantly popular, especially the singer whose lyrical inspiration comes from the literary figures whose surnames he adopts, William Blake and Edward Lear.
The story is told from the point of view of Blake’s adopted son, the circumstances of his adoption as implausible as the difference in their ages, who joins the adventure to sell merchandise at concerts; merch, as it is now universally known. Wide eyed and often legless, Sweet, as he is christened, becomes Blake’s amanuensis, noting the shenanigans, the petty indignities and discomforts that the Wonderkids endure. He’s also a party to the incident that jams the wheels on their supercharged flight, though he somehow manages to escape the fall out and emerges a wiser but sadder man.
Blake himself is difficult to pin down. He’s quirky in a rather fey, Technicolor dream kind of a way, a sort of cross between pre-casualty Syd Barrett and pre-obese Jim Morrison, but immensely likeable all the same, the perfect androgynous front man. Brother Jack, on the other hand, is from the tougher end of the rock spectrum, well into his vintage guitars, shagging the mothers of the group’s young fans, and necking all the drugs he can get his hands on, so I don’t need to draw comparisons with the real world (and might get sued if I do). Some of the minor characters are well drawn too, especially the group’s final replacement bassist, a non-smoking, teetotal, vegan lady with a penchant for God, and the label-appointed US tour manager, all rapid fire efficiency and that extraordinary ability to fix anything, absolutely anything.
The book comes with an impressive collection of accolades on its reverse cover. Peter Buck, no less, states: “There were times reading this book that I could actually smell the dank dressing rooms, or feel the bus rolling down the highway to the next gig,” and he’s not far wrong, and similar comments come from Dan Zanes and Roseanne Cash, among others. I wouldn’t go as far as that – I found the concept of a rock band aimed at pre-teens a bit far-fetched – but there is still plenty to enjoy in Wes’ book. What’s more it’s made me want to read his other, non-music related, novels.

Did you know that that you can earn dollars by locking special pages of your blog or site?
Simply open an account on AdWorkMedia and add their content locking tool.

eToro is the #1 forex trading platform for novice and pro traders.

You might be eligible to get a free $500 IKEA Gift Card.